Israeli National Bank to PA, "Your money's no good here" 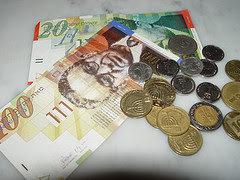 Just when they can't seem to dream up more abuse for Palestinians, the Israelis outdo themselves. As reported (in Hebrew only) on Ynet, starting 1 November, the Central Bank will stop honouring payments in New Israeli Shekels from the Palestinian Authority. This means that all non-Jewish residents of the West Bank will not be able to honour their payments for goods and services. In other words, economic strangulation that cuts them off from any kind of normal existence. According to Gilad Atzmon, who told me about it: "this is the most radical form of oppression, it means Palestinians cannot even use money, they are denied civilisation."

According to Shraga Elam: "It says that the bank of Israel (the central bank) tries to prevent the Israeli banks from ceasing to do any New Shekel clearings transactions with the OPT (since 1967). The central bank asked a postponement of a month in order that the government will discuss the political and economical implications of this step.

The big Israeli banks, Hapoalim, Discount and Leumi decided to stop the clearing as of November 1, because of pressure through the authorities against money laundering that fights transfer of monies to "terror organizations".

It means that the 3 Israeli banks declared that they are going to stop dealing with the Palestinians of the West Bank. Considering that the NIS is almost an official currency this is a severe blow to the Palestinian economy. The banks will stop e.g. honoring cheques etc. This will make it more difficult for Palestinians to pay for orders in Israel. It is not clear, according to ynet if there was a conscious decision of the government. There are negotiations between Abu Mazen and Olmert on this issue."