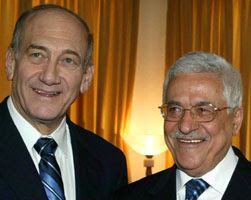 28 October, 2007
There have been real fears of late that Palestinian Authority Chairman Mahmoud Abbas may compromise fundamental Palestinian national rights for the sake of “reaching peace with Israel.”

According to insiders within Abbas’ immediate circles, “the President!” may be willing and ready to offer far-reaching concessions to the Israeli apartheid state on three major issues:

The first is the paramount right of return for nearly five million refugees, uprooted from their homes and villages by the terrorist Israeli entity back in 1948, and subsequently expelled and dispersed all over the globe.

Abbas reportedly may be willing to accept the Israeli-American view, and, now, the French view, that there is no way the refugees can return to their original homes, now mostly destroyed and obliterated, or occupied by Jewish immigrants imported from around the world to fulfill Zionism.

According to Israeli media, Abbas on several occasions intimated to Israeli leaders that he would never insist on the return of the refugees to Israel proper and that only a symbolic return of tens of thousands, or even less, would suffice.

On 28 October, Sari Nusseiba, a protégé of Abbas, was quoted by the Jewish settler paper, the Jerusalem Post, as saying that the “Palestinians” would be willing to trade the right of return for Israeli withdrawal to the 1967.

The second major concession to Israel Abbas is contemplating will take the form of ceding large parts of East Jerusalem, particularly the Jewish colonies built after 1967. These include major settlements such as Ma’ali Adomim, Har Homa, and other colonies.

The PLO chairman, who has been acting and behaving like an absolute dictator and “ruling” by decrees, is reportedly willing to barter these settlements for Palestinian territories occupied in 1948, possibly in the Negev desert. Needless to say, this would be like giving up a piece of pearl for a piece of coal.

The third and equally scandalous concession, which Abbas reportedly views as “innocuous” and “foregone conclusion” is recognizing Israel as a country “of the Jews, for the Jews and by the Jews.”

If true, and Abbas can’t be given the benefit of the doubt, then the PA Chairman would be committing the greatest of all follies and the grandest of all treason.

First of all, Abbas has no right whatsoever to tamper with this most paramount issue which touches a sensitive nerve in each and every Palestinian man, woman and child.

Abbas and his flamboyant but gullible spokespersons may argue that as an elected president, he has the right to negotiate with Israel and even reach a peace settlement with it.

But this is a spurious and easily refutable argument. Abbas never said in his election campaign in 2005 that he would scrap the right of return. Had he said something like this, not only he wouldn’t have been elected, but actually he might have been killed, even by his own Fatah party.

More to the point, Abbas was elected by a small percentage of the estimated 10 million Palestinians. Indeed, the total number of voters who elected him didn’t exceed five per cent of Palestinians.

Hence, the claim that he has a mandate by the Palestinian people to sacrifice Palestinian rights for the sake of a peace that would effectively spell outright surrender to Zionist hegemony is laughable and silly.

Indeed, the right of return is sanctioned by international law and by the International Declaration of Human Rights which states that every person who had left his or her home for whatever reasons has an inherent right to return home.

As to Jerusalem, one would wonder what would become of the capital of Palestine when the bulk of it will be usurped by the deformed children of rape, the Jewish settlements.

And what kind of peace would that be if ethnic cleansing and settlement expansion were to be allowed to win? That wouldn’t be peace, that would be a “legitimization” and perpetuation of an act of rape; and if Abbas would accept it to prove his good will to George Bush and Ehud Olmert, the Palestinian masses certainly wouldn’t.

Thirdly, Israeli leaders have already indicated that Abbas is ready and willing to recognize Israel as “a Jewish state.”

This is probably the most scandalous and stupidest political blunder any Palestinian politician would make. The reason is very simple: Recognizing Israel as a Jewish state implies that Israel, possibly at one point in the future, would have the “right” to expel its Palestinian citizens on the ground that Israel is a Jewish state and they are not Jewish. In fact, the Israeli parliament or Knesset is already discussing racist bills that would strip non-Jews of Israeli citizenship if they refuse to recognize Jewish supremacy vis-à-vis non-Jewish citizens of the state.

Mahmoud Abbas and his aides and hangers-on may well parrot the silly Israeli mantra that Israel is both democratic and Jewish, not realizing…or perhaps realizing, which would be even more appalling, that whenever there is any modicum of incompatibility between the Jewish aspect and the democratic aspect of the mendacious formula, the former would override the latter. Isn’t that happening already?

Besides, one might really wonder what political or moral right Abbas thinks he has to speak on behalf of the nearly 1.5 million Palestinians who are Israeli citizens. Are they orphans or minors or leaderless that Abbas should speak for them in a matter of life or death such as this?

This is a paramount strategic matter for all Palestinians, especially across the Green Line, which really makes it imperative for Arab leaders in Israel, people like Sheikh Ra’ed Salah, Ahmed Teibi, Muhammed Barake, Taleb Sani’ and others to speak up and warn Abbas to shut his mouth up and stop jeopardizing their future and national survival.

Finally, a word to Israeli leaders and their American subordinates. You should realize that the Palestinian people are different from other Arabs. We simply don’t sheepishly follow our leaders; our leaders must follow us, and if they don’t, we will dispose of them.