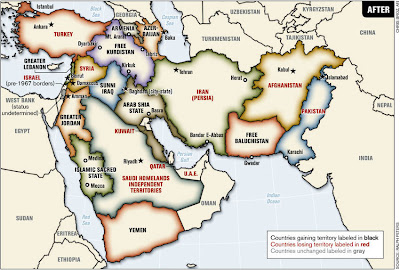 Special to Gulf News 10/02/07 "Gulf News" -- -- As if they haven't done enough damage bombing and invading a country on false pretences, destroying its culture and leaving it a charred shell of its former self, they - American lawmakers who gave President George W. Bush authority to go to war - now want to divide Iraq up into easily manageable bite size entities.

Isn't Iraq supposed to be a sovereign nation with an elected government? If so, then why is the US Senate attempting to meddle in its affairs by overwhelmingly passing a resolution calling for the country's partition into three, which is tantamount to ethnic cleansing? Not to put too fine a point the shape of Iraq to come isn't their business.

Moreover, even if they had a stake in the country they are responsible for destroying, which they certainly do not, American senators who may or may not have enjoyed a two-day jaunt to Baghdad's Green Zone are not qualified to be the deciders.

The Iraqi government was quick to put a damper on the proposal. Its spokesman Ali Al Dabbagh said "It's the Iraqis who decide these sorts of issues, no-one else".

According to a recent ABC/BBC poll a mere nine per cent of Iraqis favour the break-up of their country.

The Arab League was equally condemnatory. Its Iraq representative Ali Al Garush called upon Arab nations to stand by the Iraqi people in their opposition to the proposal.

Secretary-General of the GCC Abdul Rahman Al Attiyah said partition would make the situation in Iraq more difficult and complicated. Official statements from Syria and Iran were even more scathing.

With so much Iraqi and regional hostility against the plan what are those 75 senators that voted in favour of it thinking? It was Democratic Senator Joseph Biden a presidential hopeful who initiated the vote.

Biden explained his rationale during a news conference. He maintains his proposal offers a way to bring home American troops while leaving behind a stable Iraq. It's evident that his thinking is based on a series of false premises.

First of all the future of Iraq should not be designed around a convenient exit for US troops. Biden and his fellows should understand a simple principle. American troops are the interlopers not the Iraqi people, who have suffered enough already.

Secondly, the partitioning of Iraq into a loose federation of Shi'ite, Sunni and Kurdish states will not bring stability as he suggests. There would have to be a massive displacement of people, many of whom would end up impoverished or homeless.

Such a division would also lead to friction over natural resources. For instance, Biden's plan calls for just 20 per cent of oil revenues going to Sunnis, who already feel hard done by after losing the political influence they once enjoyed. There is also the question of which mini-state would control oil-rich Kirkuk, an ethnically-mixed city strongly coveted by the Kurds.

Moreover, there is no guarantee that such insular states would not be mutually hostile, further exacerbating existing ethnic tensions.

Thirdly, although many Kurds are amenable to complete autonomy, their neighbours are most definitely not. If a Kurdish state became a reality it's probable that Turkey would invade.

Turkey fears that such an entity would unduly influence its own Kurdish population, which has its own separatist ambitions. Iran also has strong objections.

Fourth, such a break-up would stand as a worrying precedent for vulnerable countries in the region with multi-ethnic populations.

Either Biden is completely clueless and is unaware of the havoc such a breakup of Iraq would wreak, or he harbours a more sinister agenda.

If Iraq were to be broken into three, the nation would be rendered toothless for all time in the same way the former Yugoslavia is today.

The US would then have an excuse to stay around in some force "to protect" such tiny fledgling states from each other and from their neighbours. In fact, it would consolidate complete domination of their oil because such small entities would no longer have a voice.

The biggest winner from the partitioning of Iraq would be Israel, whose officials and journalists have long advocated such division.

On the Shalom TV website there is an interview with Joe Biden who refers to Israel as the "single greatest strength America has in the Middle East" and proclaims with pride "I am a Zionist". We should believe him.

Here's a suggestion for the Arab world. How about a vote on the break-up of America?

How about giving California back to Mexico, returning Hawaii to its indigenous islanders and Alaska to the Eskimos and Indians?

Let's restrict Caucasians to the East and West coasts, and package-up a few states in between for African Americans and Latinos. And while we're about it, let's invite foreign conglomerates to buy up the country's oil, gas and timber.

Outrageous ethnic cleansing that might be but that's exactly what Biden and friends think they have the right to do in Iraq. Surely if such uninformed nose-poking is good enough for Washington, it's equally appropriate for the rest of us.

Linda S. Heard is a specialist writer on Middle East affairs. She can be contacted at lheard@gulfnews.com. Response to this article may be considered for publication.

thanks to Adib, Deb and Chris for pointing out this piece!