Soldier Lozano is Saved - Calipari's Murderer will not face trial 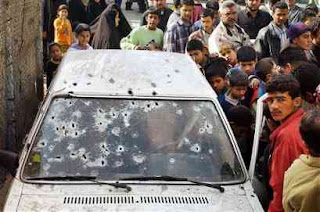 The American soldier has been acquitted by the third Higher Court of Rome by entering a non suit. Hence, not only will he never be put on trial, no judgment will be expressed on his involvement in the murder of Nicola Calipari.

How should we consider the decision of the third Higher Court of Rome which strips Italy of any jurisdiction about Nicola Calipari’s death by letting a murder and its perpetrator go unpunished? Should we see it as a legal whim? As the extreme obedience to a literal interpretation of legal codes? As a mere jurisdictional flaw? And above all, who, according to our court, should now see to demanding justice and truth over the death of our officer? Maybe a US military court? The Iraqi justice system? Or our good Lord?

Let’s stick to the facts. The American soldier Mario Lozano has been acquitted with the decision of entering a nonsuit. Hence, he will never be put on trial nor judged for that murder. Therefore, the first meaningful fact is this: Nicola Calipari’s death is a crime that will go unpunished. No one is held accountable, there is no responsibility, no punishment, no judiciary memory. Period.

Second fact. The verdict by the Roman judges aligns itself with other very questionable decisions of political and institutional importance, that we have been collecting for the last twelve months as regards our relationship with the US Administration. Italian Minister of Justice Clemente Mastella decided to not demanding the extradition of the 27 CIA agents who have been accused by Milan’s court of abduction. The government raised a competence conflict with Milan’s Prosecutor’s office by demanding that trial to be called off. Prime Minister Prodi, emulating his predecessor Berlusconi, has renewed the State Secrecy that is in vigour around the whole issue of Abu Omar’s abduction by removing it from the democratic control of the Parliament and from the magistracy’s verifications. Sismi’s (note: Italian military secret services) Director Nicolò Pollari, defendant at Milan’s trial who is blatantly guilty of “intelligence” collusion with the secret services of a foreign country in violation of Italian sovereignty, was kept in office until the expiration of his mandate and at last he was rewarded with a consultancy job in the government’s employ. Let’s stop here, for our nation’s mercy.

If we place all these episodes together, from today’s verdict to yesterday’s State Secrets, all these facts, which are different between each other in form but all clearly questionable in the substance, we get the feeling that our government has a guilty conscience towards the Bush Administration. As if we should ask their forgiveness, in one way or another, for the malice of having withdrawn our troops from Iraq. Let’s be honest: when such an intertwined and articulated combination of functions and responsibilities, from Rome’s Higher Courts to the Minister of Justice and the Premier, takes place, we are far beyond a vague impression. Actually, it makes more sense to speak of a cultural and political submission that is unfolding in these nervous weeks by denying truth and granting impunity. Impunity for Marine Lozano, impunity for the CIA’s chiefs, who are convinced that Italy is nothing more than their own backyard, the home itself of the American secret services.

That’s why this verdict, beyond the pale of alleged law, bewilders and worries us. Because it shows the effects of a terrible atmosphere filled with conspiracy of silence. And also because it unveils a renewed tolerance towards crimes and criminals from an allied country in the name of an alleged raison d’état. The sense of which escapes us common citizens once again.

http://www.aprileonline.info/4741/salvato-il-soldato-lozano
Translated from Italian by Diego Traversa and revised by Mary Rizzo, members of Tlaxcala, network of translators for linguistic diversity.