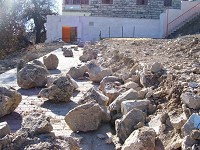 [Ma'anImages]
Date: 26 / 11 / 2007 Time: 10:14 Hebron ­
Ma'an ­ Right wing Israeli settlers broke into the courtyard of the Qurtuba school for girls in the West Bank city of Hebron and attempted to set fire to the school building on Monday morning.

The school's principal, Reem Ash-Shareef, told Ma'an that Israelis from the nearby Beit Hadassah outpost also attempted to rip the doors off the building and succeeded in knocking over walls, trampling flower beds, and blocking the path to the school with rocks.

She said she watched as a group of children, armed with axes, attempted to break the water pipes that supply the school. They were urged on by their teacher.

Israeli settlers have attacked the school and its students frequently. International human rights workers accompany Palestinian children on their way to school to protect them from settler violence.

Ash-Shareef said all requests that each time the school has been attacked, she has complained to the Israeli authorities, but to no avail. She said settlers attempted to burn the school down in August, and their harassment and assaults on the girls has been ongoing.
http://www.maannews.net/en/index.php?opr=ShowDetails&ID=26478