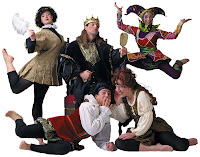 NOT THAT MANY years ago, at the hub of the Kosher Palestinian solidarity cyber ghetto lived a Marxist emperor named Moisha’le, who thought so much of new clothes for the progressive cosmopolitan chosen people that he spent all his time in trying to obtain them; his only ambition was to make his very people look as important and righteous as he mistakenly believed himself to be. But in fact, he did not truly care for his two and a half obedient Gefilte soldiers, and the Palestinian reality did not bother him either. For instance, he believed that as far as the Palestinian struggle is concerned, fighting anti-Semitism was a major priority. For him, starvation in Gaza or the emerging involvement of Zionists in the American imperial wars were something that one should not even bother to mention in any significant way. For every event and occasion emperor Moisha’le had a ready-made proletarian thought to offer. And as one would say of a king “He is in his cabinet,” so one could say of him, “Moisha’le was well imbued is in his red light kosher haven philosophy.”

The great city where he resided was very gay as well as gray; everyday many strangers from all parts of the globe arrived (mainly with Ryanair and some other budget air lines). One day, two Zionist swindlers came to this city; so clever were they that they managed to convince their tribal brothers that they were advanced thinkers. They declared that they could manufacture the finest and ultimate liberal progressive thought that would make the Kosher progressive anti-Zionist imposters look as great as they foolishly believed themselves to be. Their ideological revelations, they claimed, not only were exceptionally beautiful, but they also possessed the wonderful quality of being visible only to men with reason and clever people in general.

“That must be a wonderful concept,” thought Moisha’le to himself. “If I were to be ideologically dressed in a such an abstract ideology made by these progressive ideological wizards, I should be able to find out which men in my shrinking empire were unfit for their places, and I could distinguish between the ‘clever’ politically-correct liberal progressive cosmopolitans and the stupid ordinary humanists who expose Jewish power relentlessly, courageously and against all odds.

“I must have this ideological tool woven for me without delay.” And he gave a large sum of Matzah balls to the Zionist swindlers, in advance, so that they should set to work without any loss of time. Within a day, the swindlers set a powerful think tank in the heart of the ghetto, and pretended to be very hard at work, but, in fact, they did nothing whatsoever except eat their Matzah balls.

“I should very much like to know how they are getting on with the project,” thought Moisha’le the progressive emperor. But he felt rather uneasy when he posited that should he be lacking in the cleverness he was convinced he had, he would never be able to adopt the abstract progressive thought and the entire investment would go down the drain.

“I shall send my No 1 dishonest old minister Mr. Tovy Greencard to these think tank wizards,” thought the emperor. “He can judge best how the stuff looks, for he is a hyperactive petty criminal with an astonishing record in intimidation and nobody understands where he comes from at least as much as he doesn’t.”

The good old Tovy went into the room where the Zio swindlers sat in front of their Intel powered Mac-Hover laptops, presenting the new ideological thought that the emperor had elaborated. “Heaven preserve us!” he thought, and opened his eyes wide, “I cannot see anything at all,” but he did not say so. Both swindlers requested him to come near to the computer screen to watch the 3D presentation, and asked him if he did not admire the exquisite ideological cosmopolitan pattern emerging in front of his eyes. Gazing bewildered at an empty computer screen, poor old Tovy tried his very best, but he could see nothing, for there was nothing to be seen.

“Oh dear,” he thought, “can I be such a stupid humanist as well as a traitor of my people that I cannot see a thing?” “Yep Tovy, you are stupid, but it has nothing to do with humanism, you are just stupid like no other” the inner voice he denied seemed to be whispering to him. “Is it possible that I am not fit for my office?” “What office Tovy?” Wondered the inner voice, “You do not really have an office. You are just an imposter, just stop dreaming for Godssake.” “No, no, I cannot say that I was unable to see the truth.” “Don’t worry Tovy, no one ever expected you of all people to tell or even to see the truth,” said the inner voice before it faded away.

“Now, have you got nothing to say?” said one of the swindlers, while he pretended to be busily contemplating.

“Oh, it is very eloquent, exceedingly thought provoking,” replied old Tovy, rolling his eyes to the ceiling. “What a huge intellectual revelation! What a small effort for the Jewish progressive people yet a giant step for humanity, I shall tell the emperor that I like it very much.”

“We are pleased to hear that,” said the two ideological wizards and showed him his way to the door.

Now the swindlers asked for more money, so they could buy some fresh Gefilte Fish and Chopped liver, which are apparently a necessary ingredient for the maintenance of the Jewish working class ideology enthusiasm.

Soon afterwards, the emperor sent his second best obedient soldier, this time it was Markus Gatekeepstein, the notorious minister in charge of belligerent Jewish frontiers Policie. Gatekeepstein rushed to the thought provoking weavers to see how they were getting on. Like elder Tovy, slightly younger Gatekeepstein looked and looked, but could see nothing, as there was nothing to be seen.

“Is it not a beautiful piece of Kosher ideological cosmopolitan delight?” asked the two swindlers, showing and explaining the magnificent model, which, however, did not exist.

“I am not a stupid anti-Semite,” Gatekeepstein thought to himself in an attempt at his own reassurance. “And yet I cannot see a thing. It is very strange, but I must not let anyone know it.”

By then, everybody in the whole shtetle talked about the newly emerging precious working class cosmopolitan ideology. At last Moisha’le the emperor wished to see it for himself. With a number of elder courtiers, including the two ministers who had already been there, he went to the two clever swindlers, who now pretended to work as hard as they could, but without producing a thing.

“Is it not magnificent?” asked the two statesmen who had been there before. “Your Majesty must admire the proletarian shapes and the three dimensional eloquence.” Once again it is going to be us, the progressive Jews who are going to save the world, or at least what is left of it due to our previous religious like grand theory. They pointed to the empty computer screens, for they imagined the others must have seen something there.

“What is this?” thought Moisha’le the emperor, “I do not see anything at all. That is terrible! Am I stupid anti-Semite? Am I unfit to be emperor of the Jewish progressive anti-Zionist clique? That would indeed be the most dreadful thing that could happen to me.”

“Really,” he said, turning to the ideological weavers, “your presentation has our most gracious approval,” for he did not like to say that he saw nothing. Doing so would obviously reveal that he isn’t as clever as he must have known he wasn’t.

All his attendants, who were with him, looked and looked, and although they could not see anything more than the others said, like the emperor, “It is very beautiful. Once again it is us, the socialist chosen people who are going to lead the world working class struggle and Palestinian liberation in particular.” Some reports were heard that everybody seemed to be delighted, and the emperor awarded the Zionist swindlers with a fake golden Mazal Tov medal.

The whole night previous to the day on which the International Palestinian Solidarity Congress (kindly sponsored by the Jewish Chronically-ill) was to take place, the Zionist swindlers pretended to work, and burned more than sixteen Judeocide memorial candles. By thus burning the special midnight oil, people could see that they were busy finishing the emperor’s new ideological suit.

The emperor and all his barons then came to the hall; the swindlers held a blank CDrom as if it contained something and said: “This is for the working class! This is for the friends of the Kosher socialists around the world” as if they had any friends. The swindlers obviously knew well enough that Jewish Marxists reserve themselves a special place amongst the world proletariat.

“Does it please your Majesty?” asked the swindlers, and Moisha’le approved confidently.

The master of the Palestinian Congress, himself an atheist and cosmopolitan announced that the bearers of the new future for Palestine and the planet are ready to share their vision.

“Ready indeed,” said emperor Moisha’le preparing himself to reveal what he hoped would evolve into a new worldwide religion.

At the congress, old Tovy Greencard and Markus Gatekeepstein were handing out blank flyers, then Moisha’le the emperor marched into the hall, and all who saw him, even before the emperor opened his mouth, excitedly shouted, “our emperor’s new Ideological suit is incomparable! What a vision! What a vision, new birth to our progressive socialist affairs!” Nobody wished to let any of the others know that he saw nothing from the emperor and his alleged agenda, for then he would have been unfit for his office or be seen too stupid to fight the right war. Never was an emperor’s new ideology more admired.

“But he has nothing on at all to offer, the emperor is shooting blanks,” screamed young Jihad Abu Az Zaman. “There is no ideology, and there is no vision.” “Good heavens! listen to the voice of an innocent man,” shouted an anonymous Sun reader who happened to support the Palestinian rights struggle for real. And then Jihad said, “The Emperor is naked, he has nothing to say, has never had anything to say. The emperor and his tribal brothers are nothing but imposters.”

Greencard and Gatekeeperstein looked confused, they rushed to save their emperor, But by the time it was over, once they arrived at the crown everyone in the hall, including emperor Moisha’le, realised that Jihad was right. There was no ideology and there has never been one, just a pretence that suits some for a while.

Moisha’le knew it all but he thought to himself, “Now I must bear up to the end.” Bear up to the very bitter end, as lonely as I happen to be, it was me who brought it all on myself. Emperor Moisha’le carried himself for a bit more and then kept behind closed doors for the rest of what was left of his futile life.

Moral: Never let anyone called Jihad or anything that may sound similar anywhere near a Palestinian solidarity gathering.