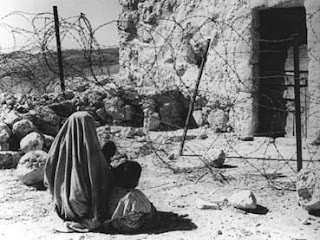 from Uruknet
by: Richard Becker
The struggle in Palestine can be complex and confusing even for the closest of observers.Like all great struggles, it has had many twists and turns, and will have many more. But the root cause of the conflict— the forcible expulsion of a people from their homeland—is neither ambiguous nor confusing. Sixty years ago, this is precisely what happened to the Palestinians in "The Catastrophe," known as "Al-Nakba" in Arabic.

Al-Nakba, one of the key events in modern Middle Eastern history, began on Nov. 29, 1947. That day, the United Nations General Assembly passed Resolution 181 to partition the British Mandate (colony) of Palestine into two states, one Jewish and one Arab. The United Nations made this decisive step without consulting the Palestinian Arabs, who at the time comprised two-thirds of the population.

Most of the Jewish population was made up of settlers who had arrived in the previous three decades, mainly from Europe. More than 100,000 were survivors of the Nazi genocide.

While the U.S. and British imperialists had done little before or during World War II to aid the Jewish victims of fascism, they used the horrors of Hitler’s death camps to rally support for the establishment of the state of Israel after the war.

The Palestinians—who had had nothing to do with European anti-Semitism or genocide—were not consulted before the U.N. vote. There was no plebiscite or vote of the people. If there had been, the outcome would not have been in doubt: One unitary state would have been the overwhelming choice. The U.N. vote was an illegitimate act and a violation of the Palestinians’ right of self-determination.

The two-thirds majority required to pass Resolution 181 was only achieved through intense U.S. pressure. The vote ended up 33 to 13 with 10 abstentions. The Truman administration leaned heavily on its neocolonies and client states, particularly the Philippines, Liberia, Haiti and Thailand, all of which initially opposed the resolution.

The forced displacement of a people

The U.N. vote led to celebration among the Zionists, the settler movement working to create an exclusively Jewish state in Palestine. Despite owning just six percent of the land, Resolution 181 awarded them 56 percent of Palestine. On the Palestinian side, there was anger and rebellion. As all parties knew ahead of time, partition meant war.

In January 1948, the better-armed Zionist military forces began to carry out "Plan Dalet." The point of the plan was to terrorize and drive out the Palestinian population. Before Plan Dalet, Palestinian villagers left their homes during battles, but typically went only as far as the next village.

On April 9, 1948, a Zionist paramilitary organization, the Irgun, massacred the entire village of Deir Yassin, raising "Plan Dalet" to a new level of brutality. When the dust had cleared, more than 200 Palestinian children, women and men lay dead. The massacre was meant as a warning to all Palestinians.

While the Jewish Agency formally "condemned" the Deir Yassin massacre, on the same day it incorporated the Irgun paramilitary into the official military Joint Command.

Twelve days after Deir Yassin, Zionist forces launched a lethal attack on the Palestinian areas of the mixed city of Haifa. They rolled barrel bombs filled with gasoline and dynamite down narrow alleys in the heavily populated city while mortar shells pounded the Arab neighborhoods from overhead. Nearly the entire Arab population fled.

By May 15, 1948, when Israel’s independence was proclaimed, 300,000 Palestinians were living and dying in abominable conditions of exile in Lebanon, Gaza, Syria and the Jordan Valley. By the end of that year, the number of dispossessed Palestinians had grown to 750,000.

In the 1948 war, Israel, with its superior economic and military resources and support from the Western powers, conquered 78 percent of Palestine. The Israeli military strategy was to not only conquer land, but also to drive out as much of the Palestinian population as possible from that land.

In the 1967 "Six-Day War," Israel seized the remainder of historic Palestine: the West Bank and Gaza. This created 300,000 more refugees, many of whom were second-time exiles, having already fled the Israelis 19 years earlier.

None of those driven out in 1948 and 1967, nor their descendants, now numbering more than six million, have ever been allowed to come back or been compensated for their loss. This injustice remains despite U.N. Resolution 194, passed in December 1948, stating unequivocally that all refugees must be allowed to return and have their homes, lands and other property restored to them. The U.S. and Israeli governments have ignored the U.N. resolution for more than half a century.

While forcibly preventing the return of any exiled Palestinians, the new Israeli state proclaimed that any person living anywhere in the world who had proof of one Jewish grandparent, regardless of whether they or their family ever stepped foot in the Middle East, had the "right of return" to Israel. Those "returning" would be granted immediately citizenship in the new exclusivist state.

Six decades after Al-Nakba, the right of return remains a key issue despite the Israeli and U.S. leaders’ constant efforts to dismiss it.

It is obvious why the cause remains so vital for Palestinians. If a people are deprived of their land, their very existence as a people is threatened. Defending the right of return is a key element in the struggle to maintain the unity of the Palestinian people between those who remain inside historic Palestine and those families that have been illegally expelled.

Israeli opposition to Palestinian return is not really because there is "no room" for the Palestinians in Palestine, as Zionist ideologues often claim. That argument is blatantly racist. Palestinian demographer Dr. Salman Abu-Sitta has pointed out that most of the more than 500 demolished Palestinian towns and villages remain unoccupied today. They were destroyed and their residents driven away for mainly political purposes—the creation of an exclusivist state.

Nor is this some long-resolved issue buried in the sands of time. Hundreds of thousands of people forcibly exiled in 1948 and 1967 are alive today. Many hold among their dearest possessions the keys to their homes in Palestine. Some of those houses, particularly in the demolished villages, were bulldozed into the ground. Many others, however, especially in cities like Haifa, Jaffa, Jerusalem and elsewhere were expropriated and turned over to Israeli settlers, who live in them to this day.

Today, 46 percent of the six million Palestinian refugees reside inside historic Palestine, the 1948 borders of Israel, or the West Bank and Gaza. Another 42 percent live within 100 miles of its borders, in Jordan, Lebanon, Syria. (Roane Carey, ed., The New Intifada, Versa, 2001)Put another way, nearly nine out of 10 Palestinian refugees could be home in the time in takes many people in this country to commute to work.

Hundreds of thousands of Palestinian families live in extreme poverty in 59 refugee camps, with no prospect of a better future. For them, the right of return is not abstract or academic, but an issue that speaks to their very survival. The situation is especially dire in the camps of Lebanon and Gaza, which are home to more than one million people.

The return of the exiled Palestinians would not mean, as is commonly claimed by the supporters of Israel, that the Jewish population would be forced to leave.

But it would mean that Israel could not continue as an apartheid-style state, with special rights for one group, serving the interests of imperialism in a key strategic region of the world.

This goes to the heart of why Israeli and U.S. ruling circles so adamantly oppose the Palestinian right of return. It also speaks to the need for all people who stand for justice and self-determination to defend the right of return as a fundamental democratic right.