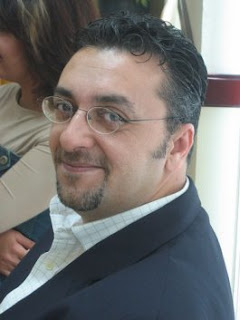 In the photo at the left, Haitham Sabbah, Uprooted Palestinian blogger and tireless activist
from Booman Tribune by shergald

The kind of censorship I am about to describe can only occur in America, sadly to say, in the freedom of speech capital of the world.

When Daily Kos, the largest left wing Democratic site on the internet, made a decision earlier this year to ban advocates of Palestinian freedom and self-determination, it did so at the behest of a cabal of right wing Zionists that monitor the site. Administration even worked with this cabal to eventually purge over twenty bloggers, including Palestinians and Palestinian-Americans, Israeli and Jewish American peace activists, and a host of advocates for Palestinian human rights (see Is Daily Kos a "Zionist Occupied Zone?", Two Peace Activists Banned From Daily Kos, Daily Kos Bans Two Palestinian Peace Activists, and Jewish American peace activist banned from Daily Kos).
A portion of the 20 or more bloggers banned from Daily Kos were also featured in this British cartoon: 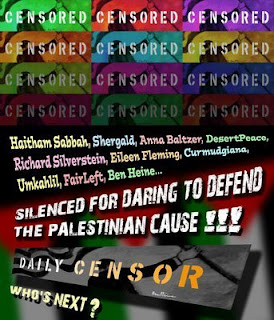 It was already the case that censorship of Israeli-Palestinian advocacy occurred on other "liberal" or left wing blogs like MyDD and Democratic Underground, where banning per se did not occur, but administrator restriction of writings about the Israeli-Palestinian conflict produced censorship anyway. Fark, another large blog, uses essay editorship to exclude proPalestinian writings from its political pages in the same way.

The liberal blogosphere has definitely been invaded by right wing Zionists and Zionist propagandists who attempt to keep the American public ignorant of the harsh reality of life in the Palestinian territories, in particular, Israel's daily killings of Palestinians (457 just in the past year alone; over 6,000 since 2000; over 10,000 political prisoners imprisoned) for the sole purpose of annexing most of these lands while nullifying any possibility for a sovereign Palestinian state.

Zionist inspired censorship on "liberal" blogs is now following an old pattern of verbal attack, charges of anti-Semitism and hate, and false accusations to instill silence about Israel's deadly military occupation and colonization of Palestinian lands. As such, liberal blogs are now following the mainstream media in enforcing silence about the Israeli-Palestinian conflict.

Many prominent left wing political blogs have essentially relinquished liberal Democratic values for the sake of expediency, or fear, of being attacked by right wing Zionist cabals, just as happened on Daily Kos.

The latest expression of the attempt at Zionist censorship was seen recently on Facebook, where some few right wing Zionists merely informed the site's administrators, falsely, that Sabbah's Blog, a leading proPalestinian human rights site, was anti-Semitic and Jew-hating. And here it is not just the case that some of Sabbah's best friends are Jews, but rather that many Israeli and Jewish peace activists subscribe to his stance concerning Israel's human rights violations in the Palestinian territories.

Facebook calls itself a social networking website that allows people to communicate with their friends and exchange information. Launched on February 4, 2004, Facebook was founded by Mark Zuckerberg, a former member of the Harvard class of 2006 and former Ardsley High School student. Initially the membership was restricted to students of Harvard College. It was subsequently expanded to other Boston area schools (Boston College, Boston University, Harvard, Northeastern University, Tufts University), Rochester, Stanford, NYU, Northwestern, and all Ivy League schools within two months. Many individual universities were added in rapid succession over the next year. Eventually, people with a university (e.g .edu, .ac.uk, etc.) email address from institutions across the globe were eligible to join. Networks were then initiated for high schools and some large companies. Since September 11, 2006, it has been made available to users with any email address[2], if they are within a certain age range. Users can select to join one or more participating networks, such as a high school, place of employment, or geographic region.

As of November 2007, the website had the largest number of registered users among college-focused sites with over 50 million active members worldwide and expects to pass 60 million users by the end of the year (also from non-collegiate networks). From September 2006 to September 2007, it increased its ranking from 60th to 7th most visited web site, and was the number one site for photos in the United States, ahead of public sites such as Flickr, with over 8.5 million photos uploaded daily.

The name of the site refers to the paper facebooks depicting members of the campus community that some U.S. colleges and preparatory schools give to incoming students, faculty, and staff as a way to get to know other people on campus.

It is on this site that we are seeing a further attempt to advance censorship of the Israeli-Palestinian conflict on America's college and university campuses and elsewhere. What is going on here?

Sabbah issued this report on his pending censorship a few days ago.

"You know you are doing well when Zionists and their alike are desperately trying to silence you."

This is exactly what is happening to me on Facebook for two consecutive days now.
As you know, beside Sabbah's Blog, I also run the aggregator, Palestine Blogs - The Gazette.
Yesterday I received an email from Facebook Team complaining about Palestine Blogs application which I created there few days ago. Following is a copy of Facebook email to me, which is self explanatory:

From: Facebook [developers - help+mmymw2yr@facebookmail.com]Date: Nov 13, 2007 12:19 PMSubject: User TOS report against Palestine Blogs - The Gazette
To: haitham.sabbah@gmail.com
Hi,
A Facebook user reported that your application Palestine Blogs - The Gazette violates our Terms of Use. The user reporting it selected Attacks individual or group as the violation. This person also said:"blatantly Anti-Semitic. Attacks Jews and Israelis as Nazis, war criminals, legitimate suicide bombing targets, etc."
Please investigate this issue.
Thanks,
The Facebook Team

I replied back to Facebook Team explaining to them that the above is not true and gave them a brief description of the aggregator - Palestine Blogs, but the email bounced back because the sender email (Facebook's) is configured to bounce emails sent to it. I looked around Facebook site to find a way to contact the 'Team' but could not find a way to do that, so I gave up… At least I tried!
The story did not end there. Today I got a second email from Facebook again, and it was another complain, but this time regarding my blog application (Sabbah's). The email below is self explanatory:

A Facebook user reported that your application Sabbah's violates our Terms of Use. The user reporting it selected Attacks individual or group as the violation. This person also said:

"Following my recent encounters with Sabbah on his blog, it is pure propaganda blog that silences everybody who disagree with the writer (I was silenced after posting very polite comments questioning a few posts). It is basically a one-man hosted hate group and i don't think it has a place on platform such as Facebook. Thank you!"
Please investigate this issue.
Thanks,
The Facebook Team

Pathetic! They did not leave anything for chance and grouped all the sins in this world together. A "one-man hosted hate group, anti-Semitic, anti-Jews, anti-Israelis as Nazis, citing war criminals and legitimate suicide bombing targets."
It looks like a systematic-desperate force trying to influence/scare Facebook to censorship what is published there. Of course this is not new around the web (check Steve's post about the resent attempt to silence Google), and I'm sure it will never stop as long as we have Zionists spitting poison every way they go.

Anyway, if I disappear from Facebook, you know why!
Any advice?

So will Facebook now become another avenue of censorship of news about the Israeli-Palestinian conflict? Wait until the college and university students who blog on this site find out about the demonization of Palestinians on the site. This is certainly deserving of a boycott if proceeds to banning, as the first amendment, which we hold dear, would be violated by Facebook on the basis of right wing Zionist operatives who seek to censor all criticism of Israel, using the old canard that criticism of Israel is anti-Semitic and lies concerning advocates of Palestinian freedom and human rights.
Let's wait and see if the college/university community responds.

UPDATE:
1) From Amal, who runs the blog, Improvisations: Arab Woman Progressive Voice
In Solidarity with Sabbah
Anti-Palestinian trolls are hard at work and one of their recent casualties is Sabbah, who is being banned from Facebook because of complaints about his political views. If they think Sabbah will be easily silenced, they have one or two or three things to learn.

2) In the name of the Baqaa Palestinian Refugee Camp outside of Amman, Jordan, and its site, this acknowledgement forwarded:
http://www.uruknet.de/?p=m38289&s1=h1

OTOH, I don't know if I can call it censor because so far my account is still running, so is my applications which the complaints were about. I would prefer to call it a 'warning' until I see real censorship on what I publish there, or worse get banned.
We shall see. A warning that your site has been falsely deemed an anti-semitic hate site gives food for thought here, and whether Sabbah will be guillotined by the right wing Zionists, who have stalked his site, remains to be seen. The Daily Kos and liberal blog experiences described above are otherwise true and harbingers of things to come. Sabbah can expect the same.