FREE GAZA! Gaza Makes an Appeal to YOU

In the picture, from Free Gaza 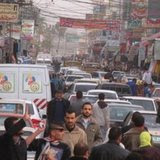 , crowded markets, but no goods or food!

About 60 years have passed since our Palestinian catastrophe (Nakba). Palestinian people have passed through and tasted several sufferings and calamities, and the Gaza Strip, which includes about 1.5 million people, 75% of them refugees, got a big share of this suffering.

By the start of the 2nd Intifada in 2000, Israeli Occupation violated all the taboos international conventions and has tortured Palestinians severely.

In the meantime, the harsh siege imposed on the Gaza Strip has been continuing for the past seven months, but with more cruelty. The siege hinders the freedom movement for people and goods into and out of the Gaza Strip. Therefore, the humanitarian situation has severely deteriorated and the fragile Gaza economy is dying out. That economy was already weak due to Occupation procedures is now on its knees. Accordingly, the Gaza Strip has turned into a big "Ghetto". All Gaza houses carry stories of pain and suffering!

Basically, the Gaza Strip depends on importing goods through the Occupied Territories that are under Israeli occupation control. Since the start of this siege, the Occupation has prevented raw materials from coming into the Gaza Strip as well as banning the exportation of Palestinian homemade goods! Additionally, unemployment rates have reached a sharp level of 70% percent. Therefore, Gaza civilians have not been able to even secure their basic human needs, in addition to the dramatic decrease of income which reached less than $650 per capita yearly.

Until this moment, the Occupation has failed in subjugating the Gazans. Thus, Occupation is seeking all methods and means to reach this subjugation.

Occupation is targeting all economic aspects in the Gaza Strip. All industry, which amounts to 3,700 workshops and factories, have closed - resulting in making 65,000 laborers unemployed. As the siege continues, farmers joined the harmed classes, especially in the most significant agricultural season. Thus, another 20,000 laborers became unemployed.

As for the Gaza crossings, there are 5 crossings and borders points that link the Gaza Strip with the world. Four crossings are with the occupied territories and the 5th with Egypt, the "Rafah Terminal". The Occupation takes full control of the 5 crossing points, thus they have made them become completely deteriorated and closed. Occupation doesn't allow people to move outside Gaza but neither are they allowed to come into it. Moreover, it allows some foodstuffs to get into Gaza Strip while raw materials and other sorts of foods are banned from entry.

Statistics report that 37 trucks of these goods are present, while the Gaza Strip needs at least 300 vans per day that bring in raw materials, goods and commodities.

In the health field, there is real danger, as sick people have double trouble with a life of suffering. Occupation doesn't permit medical parts and medications to be brought in. Besides, this occupation prevents sick people to leave abroad for treatment.

Reports and statistics issued by health sections say that there 1500 people in urgent need to undergo surgery for various diseases like kidney failure, heart disease and cancer of all sorts. Three hundred of those sick people are in a very dangerous situation.

More than 137 medical machines are out of order due to unavailability of spare parts, 23 of these machines are for kidney dialysis out of 66 machines. Eighty-six sorts of medications have vanished and another 132 kinds will be not available soon!

Since the launch of Popular Committee Against Siege, PCAS, in November 2007, 29 victims resulted from siege have been counted. Those victims were from the sick people banning from travel. They died in front of cameras and the whole world witnessed the way they died. Yet, no one has done anything or taken any action. Those sick victims were always wondering and asking…when will we travel to be treated? This same question is being asked by hundred of other sick people!

As for infrastructure domain, the projects of water, sanitation, school and health utilities have stopped due to closure. Raw materials needed in operating these projects were banned from importation into the Gaza Strip. 250 million dollars were earmarked to these projects, and thousand of workers would have benefited directly, not to mention the projects by the UNRWA that are suspended. 93 million dollars that would help people directly are not being spent, as 16,000 people would benefit from this aid. Beside this, the Occupation has decreased petrol supplies that have affected water and sanitation wells which have since stopped working. Educational, health and other structures were closed, not to mention, there is no available stationary for students. In addition, young people who study abroad were not able to travel back to continue their study in their universities, and their futures are threatened. Some families risk losing the possibility of re-entry into Gaza.

More than 25 municipality councils are about to suspend providing services for Gaza residents. These cancellations depend fundamentally on fuel, such as the collection of waste and trash.

The previously mentioned images are just some of what the Palestinian people are going through in the Gaza Strip. Occupation is besieging Gazans and violating international charters and human rights conventions including the IV Geneva Protocols and the International Declaration of Human Rights.

Since PCAS started working to face this siege, it has contacted many figures and parties. Yet, we have not heard any position or stance that has been taken. There are no factual actions to alleviate the suffering of people. Thus, we call upon you and we ask persons of conscious to move on and please do something, even by words, in order to help tens of thousands to avoid a crisis that seems inevitable.

VOLONTEERS NEEDED! Reporters, journalists, teachers, doctors, anyone who can contribute is asked to dedicate the time or energy you have. Free Gaza is able to host volunteers in Gaza.