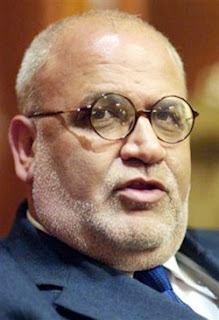 Defending the farcical Annapolis conference, Palestinian negotiator Sa’eb Erekat (in the photo) has been indulging in a lot of verbal theatrics lately.

In a succession of interviews with the indisputably pliant Palestinian media, the “devil of Jericho,” as the late Yasser Arafat used to refer to him, has argued that the Palestinian negotiators are actually fighting a real battle with Israel for the purpose of restoring Palestinian rights.

Other Palestinian negotiators, mostly veterans of the ill-reputed Oslo era, have been making similar statements, aimed at duping the Palestinian masses into giving the Annapolis malarkey the benefit of the doubt.

Well, if battle it is, then it is amply clear that Palestinian negotiators are marching to it almost totally unprepared despite the existence of a Negotiations Affairs Department (NAD), which is answerable to the PLO, as well as a well-oiled Negotiations Support Unit (NSU) at which corruption, nepotism and cronyism reign supreme.

The NSU is funded and effectively controlled by the Adam Smith Institute (ASI), a pro-Israeli right-wing Think-Tank based in London. ASI runs the NSU through a man named Andrew Kuhn, who has the official title of “Senior Policy Advisor”.

ASI defines itself as the UK's leading innovator of practical market-economic policies. For over 25 years it has been a pioneer in the worldwide movement towards free markets, public-sector reform, and free trade.

The Institute's main focus is on reforming governments and state enterprises in order to promote choice, competition, enterprise, and user-focus. It works through research, reports, conferences, advice, and media debate.

As to how this institute can be entrusted with formulating recommendations on how Palestinian negotiators ought to deal with final status issues remains a mystery, at least to this writer.

Since 1999, the NSU has received tens of millions of dollars from European donors, including UK, which pays the lion’s share, Norway, The Netherlands and Denmark.

However, there is a shroud of secrecy surrounding NSU activities and especially with regard to its financial transparency and undeclared international connections. Inside sources have intimated that some of the NSU executives receive hefty salaries reaching $15,000 per month, in addition to other unspecified perks.

According to the sources, the NSU, which is closely monitored by ASI, is instructed to have no contacts with Palestinians who reject the Oslo Accords or are affiliated with organizations such as Hamas. NSU is also advised by the donors to shun Palestinians and others who “hold maximalist attitudes toward Israel and on core issues such as ‘the right of return’ and Jerusalem.

The NSU is also instructed to refrain from giving legal advice to the NAD and Palestinian negotiators if such an advice is incompatible with the letter and spirit of the Oslo Accords and subsequent bilateral agreements between Israel and the Palestinian Authority.

For example, the NSU recommended that the opening negotiating position adopted by the PA start with the demand that Israel should withdraw to the fourth of June, 1967, with the possibility of a land swap not exceeding 5% of the total area of the West Bank.

I really don’t understand why the PA allows a foreign-funded body to have an influence on a matter so paramount as the negotiations with Israel. Aren’t there competent Palestinian experts to do the job? Can’t the PA itself have an independent Palestinian “negotiations support unit”?

I recently spoke with Prof. Ali Jerbawi, Political Science Professor at Beir Zeit University and asked him why Palestinian negotiators had decided to make the Israeli withdrawal to the 1967 borders and the resolution of the refugee plight pursuant UN resolution 194, the maximum ceiling of their demands?

Jerbawi laughed and then said the following: “Because they are stupid, because they are ignorant, because they don’t understand the basics of negotiations. Even my grandmother understood that in order to have a reasonable price for one’s commodity, one had to demand first the highest possible price in order to finally get the wanted price.”

“They should have made the 1947- partition resolution, not UN resolutions 242 and 33. Their opening negotiating position. After all, if negotiations are to be conducted pursuant international law, then Palestinian negotiators should remind Israel and the world that the 1967 borders were actually and still are military armistice lines, not de jure borders.”

Jerbawi is right and to the point. The Armistice agreements of 1949 allowed Israel to gain 77% of the total land of mandatory Palestine. These agreements gave Israel the right to occupy 22% of Palestine more than the area allotted to the Jewish state by the Partition Resolution no. 181 of 1947.

More to the point, it was clear that the armistice agreements were dictated exclusively by military, not political, considerations. This means that Israel had no legal right to possess the territories occupied during the 1948 hostilities beyond the lines specified in the Partition Resolution.

In other words, the only de jure and legal boundaries Israel has ever had are those which were specified in the Partition Resolution, and that Israel’s pre-1967 borders are no more than de facto boundaries.

Hence, the armistice line of 1949 in no way created a new de jure borders to which one could attribute prerogatives of sovereignty.

Interestingly, this view was unambiguously stipulated in the Armistice Agreement itself in Article II, par. 2, which states: It is also recognized that no provision of this agreement shall in any way prejudice the rights, claims and positions of either party hereto.

Similarly, Article VI, par. 9 states: "The Armistice Demarcation Lines defined in Articles V and VI of this agreement are agreed upon by the Parties without prejudice to future territorial settlements or boundary lines or to claims of either party relating thereto.”

In light of the above-mentioned, it wouldn’t be unacceptable for Palestinian negotiators to demand or indeed insist that Israel withdraw to the partition lines of 1947. Indeed, the opposite is true, as such an insistence, or at least an opening negotiating position, is perfectly compatible with the letter and spirit of pertinent UN resolutions.

There is no doubt that the current Palestinian negotiating strategy is a gigantic disaster in every conceivable aspect.

The reason for that is clear. The PA, if it continues the present course, will eventually come under intense pressure to be flexible, by retreating from the starting negotiating stand, e.g. accepting less than a total Israeli withdrawal from the West Bank, Gaza Strip and especially East Jerusalem.

In so doing, the PA wouldn’t only compromise the Palestinian national constants it routinely but mendaciously claims to uphold, but would effectively succumb to the Israeli view that the territories occupied in 1967 are actually disputed rather than occupied territories.

This is a real disaster that should have been rectified a long time ago. However, because of the rampant corruption permeating throughout the PA, the same scandalous flaws characterizing the failed Oslo process have basically remained unchanged, and in some cases even exacerbated.

I know that military commanders shouldn’t be dismissed in the midst of ‘battle.’ However, in the Palestinian case, it is absolutely certain that entrusting strategic negotiations with a covetous Israel to the same old failed faces will lead to even a greater disaster.

The barren Oslo years should have taught us many lessons in how to handle Israeli prevarications and deceitfulness. However, the dismal performance of PA negotiators shows that they have learned next to nothing.