Khalid Amayreh - The “Ubermench” and the “Untermench” 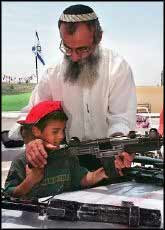 The Association for Civil Rights in Israel said in its annual report, released this week, that “racism was so rife in Israel that it was damaging civil liberties and human rights.”

“Israeli society is reaching new heights of racism that damages freedom of expression and privacy,” said author Sami Michael, president of the association.

According to the Hebrew press, the report’s key point includes a 26-percent rise in the number of racist incidents against Arabs and twice as many Jews reporting a feeling of hate toward Arabs.

“We are a society under supervision under a democratic regime whose institutions are being undermined and which confers a different status to residents in the center of the country and in the periphery,” the Israeli newspaper Ha’aretz (9 December) quoted Michael as saying.

Some of the most shocking but expected findings of the report include the following: As many as 55% of Israeli Jews support the idea that the state should “encourage” the Arab citizens of Israel to emigrate; up to 78% of Jewish respondents oppose the inclusion of Arab political parties in the government. And according to a Haifa University Study, also cited by Ha’aretz, 74% of Jewish youth in Israel think that Arabs are unclean.

Of course, anti-Arab racism, Islamophobia, anti-goyism and other forms of xenophobia have always been rife in Israel. However, these morbid phenomena have of late assumed nearly Nazi proportions as the Israeli Jewish society continues to drift menacingly toward jingoism and fascism.

A few months ago, an Israeli Jewish man invited an Arab tax driver from East Jerusalem to his home north of Tel Aviv for a cup of coffee. And when the Arab cabbie sat down to drink his coffee, the Jewish man and his brother brought in a big knife and murdered the innocent man in cold blood.

Upon interrogation, the murderer, a French immigrant, told the police that “When I killed him, I felt I was killing an animal, not a human being.”

This was by no means an isolated incident. Today, hundreds of thousands of Israeli youngsters receive inherently racist education and indoctrination, whether in their schools or in their synagogues or through the media.

A few days ago, an Israeli talk-show host told this writer during an interview… "Arabs are animals” and that “you should go back to your donkey room.”

More to the point, it is imperative to remember that this racist indoctrination is by no means confined to the rabble and the uneducated class. In truth, the entire Israeli society is based on racism. Racism is Israel’s modus operandi, and human and social equality is markedly incompatible with being Zionist.

In Israel, we have rabbis who teach their yeshiva (religious school) students that non-Jews are non-humans. Three years ago, a Knesset member by the name of Aryeh Eldad protested that “the army was treating human beings as if they were Arabs.”

Similarly, Israeli Prime Minister Ehud Olmert remarked in the summer of 2006 that “Jewish lives are always worth more.”

Recently, a few days before the ill-fated Annapolis conference in Maryland on 26 November, Israeli Foreign Minister Tzipi Livni proposed that Israel’s Arab citizens could be forced out of their ancestral homeland into a prospective Palestinian state.

Livni, whose venomous views are likely to reflect the prevailing discourse in Israel, seems to harbor the same malice and ill-will toward Israel’s Arab citizens very much like Nazi Germany’s did toward its untermench.

But unlike Hitler and his cohorts, who were brashly honest about what to do with Nazi Germany’s untermench (a German word meaning an inferior class of people), Livni is prevaricating about what she really wants.

Some Israeli political leaders are franker and more honest about their respective mindsets than others. For example, Strategic Affairs Minister Avigdor Lieberman openly calls for the transfer of Arabs from Israel. (Transfer is nothing short of a euphemism for genocide, at least a partial genocide).

Similarly, Opposition leader Benjamin Netanyahu has been proposing ways and means to check the comparatively high birth rates among Israel’s non-Jewish citizens while boosting birth rates among Jews. And then there are the gurus of messianic Zionism, the Gush Emunim people, who openly call for “a Jewish solution” and are still relating to non-Jews in Israel in terms of “water carriers” and “wood hewers.”

Do people in Europe and North America understand what is being implied by a Jewish solution? A few years ago, I pressed a Gush Emunim (Block of the Faithful) Zionist rabbi to explain his concept of the Jewish solution. The rabbi uttered three words: enslavement, expulsion or annihilation.

It is absolutely wrong to think that these Nazi-minded people represent a small minority in Israel. In fact, I can dare say that they represent the majority trend among Israeli Jews.

Today in Israel, if any politician wants to get elected or increase his popularity, he or she will have to demonstrate in ample manner his hatred of and sullen hostility toward the Palestinians and Islam.

Indeed, as nefarious anti-Semitism was the ultimate certificate of good conduct that guaranteed passage through the Nazi hierarchy, hostility to Islam, Arabs and Palestinians is now the surest way to seize the hearts and minds of Jews in Israel.

Finally, it is equally misleading to think that racism in Israel is a passing phenomenon.

Last year, I asked a veteran Israeli journalist what would become of Israel and the world if and when the fanatics of Gush Emunim reached power in Israel, either through the ballot box or by way of a coup of some kind?

The man told me the following: “For the time being, our nuclear arsenal is in safe hands, but who knows what could happen ten years from now?”

I am invoking these ominous prospects because Gush Emunim and other messianic Zionist Jews are guided by a nearly genocidal doomsday ideology which teaches that the Jewish messiah or redeemer won’t appear until and unless there is violence and bloodshed on a uniquely large scale.

Hence, it is conceivable that these religious fanatics, in cooperation with their secular fascist colleagues, would use Israel’s nuclear weapons to trigger the return of the Mashiah. Now is this the authentic Judaism that Moses taught?

Again these people are not a small minority in Israel. According to Israeli sources, more than 50% of high-ranking officers in the Israeli army hail from the “religious Zionist community.”

And, Yes these are the same people who wouldn’t hesitate to embark on the unthinkable to effect and expedite their sick whims which can be summarized in one sound-bite: “hashmada” or annihilation.