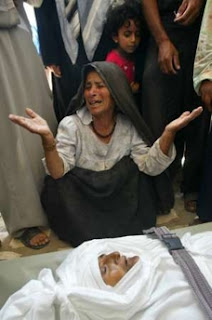 The Gaza Strip is the symbol of this tragedy.

During the last year, the embargo decreed by the Israeli authorities has turned Gaza into a concentration camp: one and a half million people survive with great difficulty. There is no other way of putting it: we are facing a humanitarian catastrophe.

Thanks to the brazen support of the US and the European Union, the Israeli regime hoped that they could force Gaza to surrender through hunger, accepting not only the historical hoax called the “Road Map”, but also the idea of giving power back to the man who had lost it in regular elections: Abu Mazen.

However, Gaza has not given in. Gaza lives and resists.The decision was taken, therefore, to make this collective punishment even harsher.
Goods, things and bodies cannot cross the borders, tanks, bombers and bombs can.

From January to this day, with the beginning of the embargo, the Israeli army – on the pretext of responding to the launching of rudimentary rockets - has carried out countless devastating incursions against Gaza, not sparing even the West Bank.
Israeli sources say that their army has killed 457 Palestinians since January, including nearly one hundred children. The majority were innocent civilians.

In these days, the siege of Gaza has become even harder: attacks continue, and Palestinians continue to die.

In such a dramatic situation, during Christmas, the Palestinian people could not be left to themselves. This is why a delegation will go to Gaza to bring its inhabitants solidarity. Not only from those who signed the “Gaza Must Live!” appeal, but also from that large part of the Italian people whose heart beats with the hearts of the Palestinian people, and which demands an end to the Israeli siege and embargo, as well as an end to the complicity of the International Community, including the Italian government.
The delegation is of a humanitarian nature, and intends to investigate the situation and look into practical ways to help the population of Gaza RESIST.
We want to breach an embargo which has even been extended to human beings, aware as we are of the symbolic importance this act has for the whole Palestinian people.
It is with these goals in mind that we shall meet the humanitarian organisations and civil society, as well as the legitimate authorities of Gaza.
The delegation will be made up as follows:
Fernando Rossi – Member of the Italian Senate;
Giovanni Franzoni – Comunità Cristiane di Base (Grassroots Christian Communities);
Lucio Manisco – Journalist and former Member of Parliament;
Maria Grazia Ardizzone –Anti-imperialist Camp;
Elvio Arancio – Islamic Studies Centre of Turin;
Davide Casali - Photojournalist;
Vainer Burani – Lawyer, member of Giuristi Democratici (Democratic Lawyers);
Maria Grazia Da Costa – Health Care Operator;
Ugo Giannangeli – Lawyer, member of the non profit association “Per Gazzella”;
Margarita Langthaler – Anti-imperialist Coordination of Vienna;
Zeno Leoni – Journalist;
Leonardo Mazzei – “Gaza Vivrà” Committee;
Erika Miozzi – Humanitarian non profit association “Sumud”;
Giuseppe Pelazza – Lawyer;
Anika Persiani – Humanitarian non profit association “Sumud”;
Carmela Vaccaro – University professor and expert on water issues.
According to the mandate it received at the meeting in Florence the delegation will report on the situation when it comes back, and will propose the next steps in this mobilisation. Original URL http://www.gazavive.com/
Translated from Italian by Miguel Martinez, member of Tlaxcala, network of Translators for linguistic diversity.
url for Tlaxcala article: http://www.tlaxcala.es/pp.asp?reference=4331&lg=en