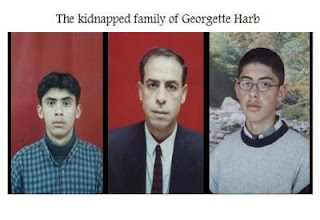 Trouble is Double for Georgette Harb Bring Georgette her afflicted family!
Palestinians have consistently lived through the traumas of home destruction, nearly all families have its martyrs from life under occupation these last 60 years. The existing siege only helps them to relive the negative experiences all over again and Georgette is no exception.

A simple modest family came to settle in its home town of Rafah City, Palestine. The family maintained the slogan, " East or west home is best, to have a rest in your own nest" The father made all efforts to secure a very nice house for his family. He didn't care about the location, which was near the military posts of the Israeli border. He thought that they were protected by the International Laws of the UN Charter and that the 4th Geneva Convention is recognized during time of War! Yet, life turned upside down! Georgette Harb is the name of a young Palestinian woman in the Gaza strip. Her name is a little bit strange, her story is strange as well. We met Georgette who seemed to be exhausted and tired of her new tasks, the family's sole breadwinner and she started narrating her story: " My name is Georgette because I have a Romanian mother whom I've never known. Before, 21 years ago, a new flower was planted in the garden of life but unfortunately, it didn't have any mercy from the one who planted it. "That flower is me." I lost my mother when I was one year old when my father decided to leave Romania and return back to his country, Palestine. My mother refused to go, and said; "Palestine is your country and your daughter's as well. So, take your daughter and leave my country and go back whence you came." Her father picked her up and left Romania for Palestine. Here we are, and so the story begins…

He went to the place where his first wife, sons and daughters lived. He went to Yemen because he was a refugee who is banned from entering into Palestine. Georgette went on telling her story, tears streamed like a crazy river and her voice was trembling like that of a very tormented woman! In 1994, Georgette and her family reached Palestine after the Oslo peace agreement. "We lived in the outskirts in what a so-called rented flat, in Rafah, Gaza Strip. Our dream to have our house was finally achieved 3 years ago. Oh… what a dream but Israeli ghosts damaged that dream with no mercy. The 9th of June 2007, 6:00 a.m was a baleful day for us when Israeli armed soldiers backed by tanks stormed our house. My father and brothers fled the house with fear of enemy assault and aggression." Said the panic stricken Georgette. Georgette and the rest of her siblings hid themselves in a bedroom, reckoning it was safe. Yet, the Israeli army was fast like the wind and demolished the external wall of that room. "Into the other room, let us move, hurry up…hurry up… Georgette told her siblings." But sure enough the soldiers were waiting for the innocent family. Finally, we tried waving a white banner through to the soldiers as they sat inside on our garden. We were harmless ladies and children, no men and no guns with us. Half hour under the heat of the sun before an order to return back to the house came where we found to our surprise more than a hundred soldiers were encircling the house. Although the room wall was destroyed, they made us sit amongst the rubble and then brought another 30 captives to the house. While we were about 60 people in this small room without food, water, not even milk for the children, the soldiers outside the room were destroying and stealing everything. They stole jewellery, any monies, a computer and even mobile phones. After the desolation, and torment of the robbery process, the two days of nightmare went away. We thought it over and done but it wasn't to be. On the 27th of Nov 2007, it was another ugly day when Israeli forces came again and took our only treasure. Tuesday 3:30 a.m, Israeli tanks restricted a big area surrounding our home. All men who lived there escaped to safer areas, my father and 3 brothers escaped also. But their fate was completely different to that of the others. While they were escaping, the IDF were waiting for them, first they caught Ramzy and told him to keep silent, Ramzy shouted "what, what do you want?" To try and warn his father and brother, but it was too late. They caught my father, Mohammed and my two brothers Saeed and Ibraheem. Mohammed was shot in his leg and abdomen, Saeed was shot in his leg and jaw and Ibraheem was shot in his leg. Occupation has no mercy, they arrested them all, although they had been dangerously hurt, they left them bleeding for about two hours before taking them to an unknown place. One can only imagine of their wellbeing.

It's now been over four weeks and we still don't know anything of their whereabouts. The questions have to be asked, "Where are our human rights? Is an animal better than a human?

When can we know anything about them? Is there no advocacy or law to defend them? Who will support 6 ladies and three children financially ruined? We need all the help and support we can find."