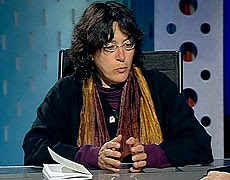 At the left, Ms Hass when interviewed recently in Italy.

The fall of the Rafah wall was a fitting combination of planning and the precise reading of the social and political map by the Hamas government, mixed with a mass response to the dictates of the overlord, Israel.

Quite a few people in Rafah knew that "anonymous figures" had secretly been destabilizing the foundations of the wall for several months, so that it would be possible to knock it down easily when the time came - but the secret didn't leak. The hundreds of people who began leaving Palestinian Rafah right after the wall was breached did so despite the risk, and the precedent of the Egyptians shooting at those who infiltrate through the border.

The leadership and public of Gaza, as two elements of the occupied people, were partners in the courageous and necessary step of breaking the Israeli rules of the game. The breach of the wall is a clear manifestation of the conception and temperament of a popular resistance among the Palestinian people, which for various reasons, were dormant in recent years.

The Palestine Liberation Organization is concerned, and rightly so, that the collapse of the wall will provide Israel with an additional excuse to finalize the separation of Gaza from the West Bank. There is nothing new in this tendency: The Israeli siege of Gaza has been developing radually and persistently since 1991, and intensified during the Oslo years. But the PLO leadership then did not have the necessary creativity to lay down in time a practical challenge to Israel's consistent, destructive and strangling policy of restricting Palestinian freedom of movement.

No wonder. Then, like today, Israel worked to heap privileges on senior Palestinian Authority officials and their associates, granting them some freedom of movement. The officials publicly condemned the restrictions on the movement of the general public, while submissively accepting their privileges. Therefore, their political imagination was unable to provide practical plans of action against the separation of Gaza from the West Bank, and against the reality of incarceration faced by the majority of their people.

The chance of using the achievement of having breached the wall as a way of moving forward and developing the tactics of a popular struggle is hampered by two primary obstacles. One is what's called the "armed struggle" - such as rocket fire from Gaza targeting Israeli towns, or a suicide bombing in Israel. The Palestinian mantra that an occupied nation has the right "to fight using all means" rings hollow, since what's at stake is not a right, but the effectiveness of the struggle.

It has been proven that through popular disobedience, the Palestinians manage to break the Israeli rules of the game and bring their concerns back to the centre of global attention - as well as intensifying criticism of Israel. The "armed struggle," especially when it is aimed at civilians, achieves the opposite: It presents the Palestinians as the aggressor, not as the occupied party under attack, thereby weakening their global standing.

If the Gaza government does not want to lose the momentum of the wall's fall, it must not make do with just having its own militants desist from firing Qassams: it must make it clear to other organizations that they are hindering a successful move of resistance.
The second obstacle is the Ramallah government's entrenched refusal to speak with Hamas. These are, after all, two quasi governments whose legality is questionable from the perspective of the Palestinian Authority's basic law. But both represent the same occupied people and the same tract of land subject to an accelerated process of colonization - and that overcomes all legal quibbling. Mahmoud Abbas met with Ehud Olmert without preconditions during the same weekend when Israel imposed the cruelest siege yet on Gaza, but Abbas can't speak to Ismail Haniyeh without the Hamas leader accepting his preconditions?

This boycott contributes to the severance that Israel works so diligently to intensify. The longer the delay in direct talks between the two leaderships over practical ways of lifting the siege of Gaza, the greater the concern that indeed, as Hamas officials argue, the Ramallah government listens to the United States and to Israel - but not to the will of its own people.
from http://www.haaretz.com/hasen/spages/949361.html