Badil to the Human Rights Council - A Call for Sanctions 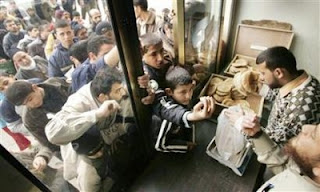 As part of its historical policy to change the demographic composition and impose a Jewish majority in Israel and the Occupied Palestinian Territory, Israel forcibly displaces Palestinians from their homes and lands and subjects them to imprisonment and other severe deprivation of physical liberty in violation of fundamental rules of international law.

In addition to the well-documented Israeli-induced humanitarian crisis in the occupied Gaza Strip and West Bank, Israeli officials and the Israeli High Court are guilty and have abetted serious war crimes, such as collective punishment, indiscriminate and intentional attacks against the civilian population, and torture and inhuman treatment. These officials and the Court are guilty of persecution because they have intentionally and severly deprived Palestinians on ground of nationality of their fundamental rights in violation of international law.

Throughout Israel and the OPT, the Israeli government is also guilty of the crime of apartheid because it imposes an institutionalized regime of systematic oppression and domination against the Palestinian people and has the intention to maintain that regime.

Badil stresses that the Palestinian people need accountability and to see those guilty of war crimes and crimes against humanity prosecuted and punished. Badil urges all members of the international community to undertake measures of Boycott, Divestment and Sanctions against the governement of Israel until it complies with international law.

1. Urge state members of the UN to take measures such as economic sanctions and diplomatic boycott against Israel for its breach of international law and non-implementation of UN Resolutions, as well as the advisory opinion of the International Court of Justice on The Legal Consequences of the Construction of a Wall in the Occupied Palestinian Territory.
2. Undertake a study on the applicability of the crimes of apartheid and population transfer to Israel's actions in the Occupied Palestinian Territory and Israel.
Badil Resource Center for Palestinian Residency and Refugee Rights
Ingrid Jaradat Gassner
+972-277-7086
info@badil.org