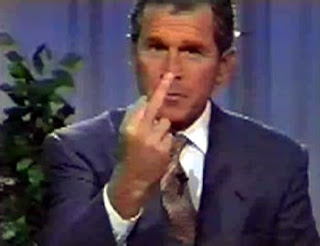 Letter to George W Bush
Why don't you Bomb Yourself and Save Us All
President Bush had tears in his eyes during an hour-long tour of Israel's Holocaust Memorial on Friday and told Secretary of State Condoleezza Rice that the U.S. should have bombed Auschwitz to halt the killing. AP

This is what President Bush said today at the end of his formal visit to Yad Vashem Holocaust Memorial.

You see Mr. President, it couldn't work out, because at that time Hitler was working for America, killing 'red Communists'.

At the time, America and Britain had an armistice with Nazi Germany in mind.

You simply couldn't just admit that Hitler was a butcher? No one makes peace with industrial mass murderers.

As if this is not enough, at the time your country's military intelligence didn't really buy the story of Nazi Germany's involvement in mass liquidation. Consequently, your country didn't open its gates to Jewish refugees.

However, if you are truly shocked by Nazi inhumanity and regret your country's impotence at the time of the war, now is the time to act.

You can always save the Palestinians.

You can, for instance, just threaten to bomb Tel Aviv, Haifa or Jerusalem...

This will be enough to liberate the Palestinians in Gaza Concentration Camp.

In case you are still motivated by a genuine humanist call, you may consider bombing yourself, and saving the rest of the Iraqi people from the genocide you apparently inflicted on them.

Mr President, it is never too late to save humanity from yourself and your ilk.

Letter to the Editor of The Argus, the newspaper that did the smear piece on Atzmon.
Crowd to hear speaker were no racists
Thanks to a story in The Argus on Monday, and Jean Calder's comment piece (The Argus, December 29), last night I was able to hear an interesting talk by Israeli jazz musician Gilad Atzmon. Some people attending arrived clutching the article from Monday's paper.
Unfortunately, because one man stuck up threatening posters at the Brighthelm, I had to hear the talk standing up in the kitchen of a private house while Mr Atzmon's talk was relayed by TV from a crowded upstairs room. It turned out that the protester had originally been invited to debate with Mr Atzmon.

Much of the talk was the fascinating story of Mr Atzmon's life as a Jewish person growing up in Israel in the 1970s. He told us that all he wanted to do as a teenager was play the saxophone, so when he was conscripted into the Israeli Defence Forces his "job" was to play in the army band.

Then he recounted his horror at what he saw when taken on a tour of a camp for Palestinian prisoners run by the Israeli Defence Forces in Lebanon in the 1980s. He called it a concentration camp. He said that as a child the only Palestinians he knew were the ones that cleaned his parents' house and that they were taught nothing about Palestinians as people at school.

His experiences in Lebanon made him question his whole upbringing and he eventually decided he could no longer live in Israel.
I can understand why some may find him offensive. He described his grandfather's Zionist militia, who apparently took part in more than 50 massacres of Palestinians in the 1940s, as Jewish nazis - not a term I feel comfortable with. And his sarcastic, humorous speaking style is mocking of everything whether it be jazz, Marxists, leftists or religious tradition, which can make people feel uncomfortable.
But I am certain that Mr Atzmon and all the people crowded into that small house last night would be the first to oppose all forms of racism, anti-Semitism and nazism. What a shame that it is so easy to prevent proper public discussion on such important issues.
Dave Jones, Springfield Road Brighton