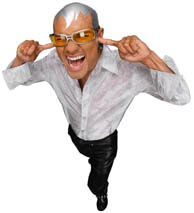 From the series, "they wobble but they don't fall down".....
news news news
Very reliable sources inform me that Tony Greensteon is spreading the lie that it was the Venue and Authorities that asked for Gilad's speech to be cancelled. This is indeed not the case, as it was indeed the event's organiser, Francis Clark-Lowes, who, out of a desire to prevent a neutral venue from being exposed to handling pressure from lobbyists and those who would render the normal functioning of the venue problematic, informed them he was changing the venue. Due to the kind of lies that the person putting on the pressure is generally used to stating, knowing full well that he is lying and willing to drag anyone who disagrees with him or does not cave into his demands in the dirt, Francis decided to spare them the harassment.

There WAS NO order or instruction from ANYONE to make the change, and it was a choice that was made internally of Invitation to Learn. That Tony is spreading this lie doesn't surprise any of us who are used to his tricks. But, there are those who are going to be fooled by their friend Tony and might just wonder whose side he is on and if his pathological lying is something that they might themselves become victims of one day if they allow him too close. It is likely that this source will allow the publication of the incorrrect information that was sent by Tony to a mailing list so that people can compare the two versions, and then actually ASK the venue if they themselves denied permission. Anyone should be willing to know the truth, common people, journalists... those who are involved with campaigning for Palestine. Lies, as they say in Italy, have short legs, and Tony is dragging his chin on ground level. Keep tuned for further details.

Tony Greenstein is at it again. This crusader for preventing anyone from expressing a view that is different from his (and I'd say that the majority of Anti-Zionists are on the other side of the fence from Tony, since he doesn't think Zionism is about Jewish Immigration to Palestine-Israel, but that's for another discussion list -"Alef") is back to his tricks of intimidation. Gilad Atzmon is booked to come to Tony's town. Tony won't have it. He wrote to newspapers, which cut and pasted tidbits he gave them and threatened a picket, as well as pasting notices on the premises... a church! The usual stuff you might say. Well, here's a recent development. To avoid exposing a public venue to having to deal with Fascist-like thuggery and intimidation, the organiser of the event decided to have the venue changed. Everyone is welcome to attend. (Until the next instalment!)

The organiser of the event sent me this email explaining the venue change: It is the response he sent to an email by Tony

"The immediate reason that I withdrew from the Brighthelm, Tony, was that you had, without permission, started pasting notices on the premises opposing the meeting and this notice included a copy of the Calder article. These notices were bound to be a major embarrassment to the church. Moreover by the manner in which you acted, the manager was bound to deduce that further such behaviour was likely. Indeed you were announcing your picket. To say, therefore, that you did not put pressure on the Brighthelm is disingenuous. It is ironic that you take me to task for damaging the Palestine solidarity movement in holding this meeting when your actions do precisely that - and I, of course do not accept that the Gilad Meeting does anyway. I do not believe for a moment that you thought it unfortunate that the manager of the Centre caught you in the act of putting up these posters. Certainly he was affected by the grossly distorted view of Gilad Atzmon given in the article - that was precisely your intention. He hadn't got the time to investigate what, at your instigation I'm sure, Jean Calder had written. When he called me to discuss the matter I relieved him of any further embarrassment by withdrawing."
Cheers, Francis

and, the public announcement:
A note on the change of venue

Please note that due to extremely intimidating and manipulative action taken by Tony Greenstein against the meeting scheduled for 7.30 p.m. on Monday, 7th January, it has been decided to withdraw from the venue booked at the Brighthelm Centre and to hold the Gilad Atzmon meeting instead at my house, 9 Trafalgar Terrace, Brighton BN1 4EG.

To have booked another public venue would simply have encouraged a repeat of the same tactics and would likely have brought the Palestine solidarity movement into further disrepute by revealing the deep divisions between some of us.

That Greenstein is able to threaten and restrict public debate in this way is disgraceful, but it demonstrates only too clearly (a) that it is not only Zionists who use such tactics, but anti-Zionist Jews as well, thus mirroring the atrocious behaviour of the Israeli state itself, and (b) that there is such a prevailing fear of being accused of racism, and especially ‘anti-Semitism’, that rational debate around such issues has become very difficult.

Zionist and Jewish anti-Zionist gatekeepers have been all too successful in controlling the parameters of discussion on the Israel-Palestine conflict. It is high time that we stopped them from doing so, for otherwise there is little hope that the situation for the Palestinians will improve. Conventional campaigning has its part to play, but it is insufficient. There are wider issues, and they need debating.

Come to the meeting to hear a much broader perspective on the conflict. And if you still disagree with Atzmon, then engage in a debate with him, rather than trying to exclude and intimidate him and other like-minded thinkers from expressing sincerely held views.

The Primacy of the Ear -
The Road from Music to Ethics

(Trafalgar Terrace is a twitten [alleyway] between Trafalgar Street, which runs down from Brighton Station, and Gloucester Road. You cannot access it by car. The parallel streets above and below are Over Street and Kemp Street. The Brighthelm Centre is less than five minutes walk away.)

Gilad Atzmon is a jazz musician, author and antizionist. He was born a secular Israeli Jew in Tel Aviv and trained at the Rubin Academy of Music in Jerusalem. He then studied philosophy at Tel Aviv University and later at Essex University before moving to London at the age of thirty-two. Atzmon has been accused of antisemitism, but responds by questioning the concept itself: “Because ‘antisemite’ is an empty signifier, no one actually can be an antisemite and this includes me of course. In short you are either a racist, which I am not, or have an ideological disagreement with zionism, which I have.” He describes himself as a Hebrew-speaking Palestinian. In this talk, which will be illustrated with live performance, he will describe his encounter with Arabic music, and where it led him.

There is no charge for this event