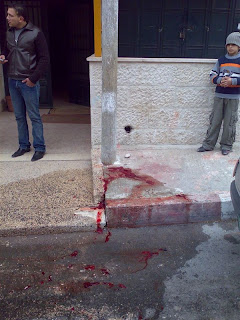 What follows is an email passed to me by Nadia, a brave and determined Palestinian woman who never gives up. She was bullied upon her attempted entry to the land that she belongs to, even though this was not legal. She was forced to turn around and she lived and worked in Jordan. She now works for a project in a Palestinian Embassy in South America, and will again return to the Middle East. But, her friends and her heart are in Nablus, from where Mira, another citizen of Nablus, sent her this letter. It is shocking. It's time to get mad. We can't look at this innocent blood spilt as if it is all part of "ordinary administration". What follows is a report that talks about the innocent blood spilt, in the picture you see at the left. The scene is ugly but quiet, but the terror in the hearts of those who witnessed this cannot escape us and should not leave us indifferent.

Dear all, I am writing this while feeling so useless and mad ... I really donno what could be said.. I know that a lot of you read news of such incidents on daily basis to an extent that maybe its becoming boring, usual or even not touching; I also have the same feeling many times even though its my people we're talking about here; I guess this is human nature we tend to forget and get used to things quickly just like sadness is being normalized into our lives, occupation is too ...

I am writing you today to ask you to read this piece of news that a friend of mine wrote; Saed, maybe some already know him... today near Al-Shuhada' mosque of our neighborhood a man was shot in the head; a father of two children lies now in one of Nablus hospitals not knowing if he will ever be what he once was ... I am deeply touched by this incident not only because of that but because I cannot stop my ideas from making up another scenario; my father and brother were in the same mosque when the incident took place.. I keep thinking what if it was them ?? how bad was the luck of this man to be there when the shooting took place and how worried, sad and angry would the family be? I could be now in their position, shouting and crying helplessly not knowing what to do to save the life of this father and husband..

ridiculously Israeli soldiers went into the hospital after the incident, stormed the room where the man was being operated claiming that they want to investigate the circumstances of the shooting, witnesses also mention that those had surgical gloves on; as we all know such an act is illegal under international law... but well what international law could we talk about here, I think its really silly to even mention that when dozens are being tortured, arrested, killed and besieged daily just because they are Palestinians and they chose to remain there ...

Nothing much could be said ... except that at the moment I feel there is no such a thing as reason or logic; I think I am getting sick of being used to it, I am sick of not being able to do anything and of being here for enjoying my life while my people are being oppressed by the occupier and exploited by our foolish leadership, until when??? until when ? what limits do we have for our patience ?

Sorry for being long and boring but allow me finally to invite you to read the story another friend of mine wrote while waiting to hear news from her family who she lost contact with after the invasion which started yesterday dawn; apparently the family is being trapped in one room of the house with no means of communication with the outside world; a regular act invading forces use when occupying Palestinian residential buildings: http://www.indymedia.org/en/2008/01/898857.shtml

Israeli soldiers opened fire on Palestinians on their way to Friday prayer seriously injuring Nablus resident Ahmad Mohammad Abu Hantash in the head. The incident happened at noon as worshipers were heading to Al Shuhada Mosque in the western part of Nablus. As worshipers were entering the mosque an Israeli armored vehicle opened fire hitting Mr. Abu Hantash in the back of his head with three rubber-coated metal bullets causing extensive damage to his brain and neck. He is currently undergoing surgery in Nablus Specialty Hospital located near the mosque in an effort to save his life.

Several witnesses say that the shooting was unprovoked and expressed their anger and frustration for the Israeli Army complete disregard to human life and the sanctity of holy places. One of the worshipers who was walking with Mr. Abu Hantash said "I was walking with Ahmad to the mosque and suddenly I heard a gunshot and saw Ahmad fall beside me, I was horrified to see his blood splashing all over the ground, and did not know why the army shot at us, we ducked for cover and when the Israeli jeep left we rushed Ahmad to the nearby Specialty Hospital."

The Israeli Army has been conducting a major incursion into Nablus since the dawn of Thursday, Jan 3, 2008, and the operation is still ongoing. More than 45 Palestinians have been injured in the past 24 hours, and the Israeli army arrested 20 Palestinians.