Mohammed Omer - So Many Tragedies in So Little Time 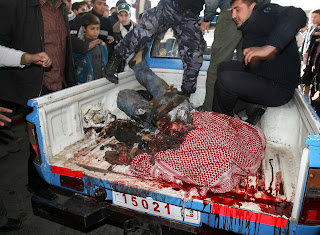 (Mohammed Omer is a photojournalist in Rafah)

Where to start…, what to talk about…? The crippling electricity shortages, affecting hospitals as well as civilians? The air strikes & on-going, daily bombings by the Israeli army, their indiscriminate targeting of civilians and police stations…? Israel ’s non-accidental, enforced starvation of 1.5 million people by closing off ALL borders and not allowing in even UN aid, let alone basic medicinal, food, and construction needs…?

Shortages of fuel have re-surfaced in Gaza : most of Gaza has no electricity and even more importantly, the shortage of medicine in Palestinian hospitals continues to increase, with the Ministry of Health reporting a looming humanitarian catastrophe.

Or should I begin with the bomb which just hit a wedding close to the Ministry of Interior building in Gaza City , with 15 apartment buildings within the bomb’s target range? One woman was killed and 47 others were injured –mostly children and women who had been inside their homes or playing on the street!! Scenes of children injured, bleeding and crying just moments after they had been enjoying a wedding celebration in a Gaza wedding hall…a horrific sight likely to go without mention of that in most news sources.

The injured were evacuated to Al Shifa hospital, where it was then hard to find enough beds and blankets for them, with children crammed three to four on a bed due to overcrowding.

Earlier Friday, Israel closed its border with the Gaza Strip to all traffic in what officials say is response to cross-border rocket fire, preventing even UN humanitarian supplies from getting in. The decision came after Israel vowed to broaden its military campaign against Gaza militants who have fired more than 110 home made rockets at southern Israel in the last three days resulting in the injury of two Israelis.

In contrast, 19 Palestinians were killed in one day last Wednesday during another Israeli attack, this one targeting the eastern part of Gaza City . 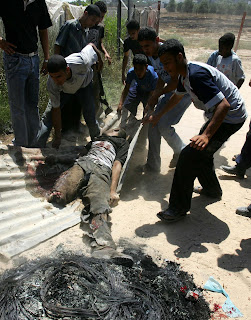 These are the latest attacks, but not the only: since the visit of US president and ‘peacemaker’, George Bush, within only 74 hours, Israel has killed 37 people and injured more than 90. Those numbers, which could again go up at any minute, were confirmed by Khaled Radi, the Ministry of Health spokesman in Gaza . Radi also said that Israel is using internationally illegal weapons, which makes it impossible for people to identify the bodies of their relatives as they have been destroyed to unrecognizable ends.

Among the tens killed were a 13 year old boy and his father and uncle, killed in what Israel claims was “a mistake”. Another Israeli attack killed a mother, Maryam Al Rahel, and her son, Mohammed, who were on a donkey cart when an Israeli warplane bombed them. Their bodies, like so many others, were rendered into small pieces of flesh, scattered everywhere!

An Even Blacker Night!

I and some journalist colleagues went to offer condolences to a journalist friend of ours for the death of his cousin as a result of medicine shortages on Wednesday. While on the way, there was a lot of shooting going on, from funerals and demonstrations. Later, as we were starting to drive off from our parking spot, Mohammed, another journalist, suggested waiting for a moment. But as others preferred to not wait around, we eventually left.

After we had gone just a few minutes down the road, we learned that the place where our car had been parked had just been bombed, targeting and killing two Palestinians, injuring another three. “It could have been us who were killed,” one of the journalists said to me. I answered: “Thanks to God, it wasn’t. But this is so sad; it must be terrible for their families, with children left behind and no one now to support them.”

As predicted, the death toll has risen since I began this report: another two have been killed in northern Gaza , and another 4 badly injured. Israeli Ministry spokesman, Shlomo Dror says that: “It's unacceptable that people in Sderot are living in fear every day and people in the Gaza Strip are living life as usual.”

And I wonder, what exactly does he consider “life as usual”? For if he means it is normal that over 35 civilians should be killed in 4 days, an entire population should be on the verge of starvation and should be forced to shiver through winter nights without electricity or sufficient blankets, that hospitals and medical centers should be forced to shut down or operate at sub-par capability and without needed medicine, food, blankets, and even space,…the list goes on…well then yes, we are living life as usual.