In the light of the recent Annapolis efforts to resolve the Middle East Everything, we of the Al-Aqsa Resistance Brigade of PePa make our first attempt to restore some of the protagonists to their people and to free our prisons of political prisoners so that they can have room for war criminals.

We demand that Harry’s Place negotiate the terms of a prisoner exchange between ourselves and Engage.

The prisoners in our captivity are also tiring of their confinement, so partisan humanitarian entities who care about the fate of their prisoner, such as Jews Sans Frontiers and Socialist Unity are also permitted to take part in the advanced stages of the negotiations.

We will release one Gilad

And one bit of Greenery

The site of their release is the Wimpy car park, 52 Blatchington Road, Hove at midnight on a date to be established, including the Shabbat. We currently hold a fully reinstated resident permit so we don't foresee any complexities with parking.

In return, we demand the release of all Hamas prisoners in your possession.

Knowing full well that you will never agree to such terms, yet determined in our will to arrive at a situation that leads to a permanent Hudna, we will at this time settle for the immediate release of our crack double agent Daud Harisi. 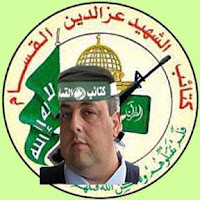 Harisi, our double agent did so well for Israeli intelligence that he is now thoroughly convinced that he is David Hirsh, a human being and a J E W for real.

We also make a demand for the immediate release to us of Ariel Sharon, as the agricultural season is about to commence.

Our Brigade has economised in every possible way, but we know that we need vitamins, and we are tired of bullion cubes and demand a Kibbutz-raised vegetable for our revolutionary minestrone.

We do realise the restraint there will be for the Zionists to take one bit of Greenery in exchange for another that has proven itself on the field. But we ask you to also consider the advantages of putting the hostage we have in our possession to the test on your soil. In all honesty, we simply can’t afford his upkeep any longer. During captivity he has caused considerable damage to our movement. He has vandalised office property, and in fact, the copy machine is being held together with the glue meant for the flyers we managed to confiscate from him before he was able to plaster all of them onto a Christian Church. He also has kept us awake at night asking for the toys he obtained in a revolutionary way through defying the idea of the sanctity of private property.

It is too much for us, and we admit our inability to maintain this hostage further. At the end of the day, Greenie is a Human Being, as well as a J E W, in the very same way as Gilad.

You probably have deduced that we are at the end of our ropes and can no longer cope. We are just ordinary human beings.