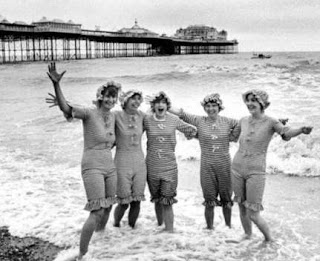 The lovely ladies in their summer attire are preparing a warm welcome for Gilad Atzmon at Brighton on Monday.
But, would it really be an event if there weren't some fuss around it? Those who have been following this blog know the sad saga of Tony Greenstein. Yes, the man who spends at least 3 hours a day posting comments in various blogs complaining that other people should shut up, has been working overtime to keep Gilad out of his turf (or surf, if we are to judge by the bevvy of bathing beauties at the left). No. It wouldn't be an event and for those who have read this post knew that there had been a well-informed person who declared that Tony has been tainting the truth and bending it to suit his personal agenda yet again.

Summing it up: Gilad was booked for an speaking and musical event. It was to take place at a public venue. Tony didn't like that and decided he had to act. I really hope he puts just as much effort into every event that a Zionist holds in his town, just to be consistent. He contacted a journalist friend so that an article could be written that was admittedly a cut and paste job of an article that Tony has been recycling himself for over a year. Tony was found sticking flyers to the walls of the venue (a church) and threatened that there would be a picket should the event take place. Not wanting to cause undue stress to the venue, the organiser himself decided to move the performance to another place, a private residence, so that the organiser would bear all the burden of the harassment himself. (That the harassment should cease is simply not to be considered, knowing the subject involved, and it will be interesting to see if Tony decides to picket a private residence!!!). There was no pressure exerted upon the organiser, as it was his own choice to assume all the burden coming from harassment and spare others. It is easy to lie when you believe people won't find out the facts. But, Peacepalestine likes facts and has no trouble finding them. Rotten things tend to smell, and when Tony sells his fish, they stink.

Things should have ended with the change of venue, the harassment and the lies should have ended, shouldn't they? No. Tony does not want Gilad to speak in his town, and he takes the venue change as a personal victory. He's been gloating and bragging that his battle is won.

Tony, all you have been doing is spreading false information! THIS is the letter that you sent around to dozens of individuals. Obviously, not all of them agree with you, and some of them are absolutely disgusted at what you are doing and the way you are doing it. Some of them are fed up with your tactics and the damage you bring to any kind of unity that people should have regarding speaking out on the issues. Some people don't take things sitting down, and they will not tolerate your lies, insinuations and fabrications. Permission was given for the publication of this exchange by one of the recipients. I was not asked to hide identities, email addresses, private phone numbers and other reserved information that is contained on the email either. But since I have scruples, I am obscuring the specific names. Some people will be able to figure out who the other interlocutor is on their own, but I'll hint that he signed the Euston Manifesto (which is a lobby group in the UK to protect Israel interests from the "left" ahahahahaha!) and is a regular commenter of Engage. He doesn't even support the boycott against Israel, but none of this bothers Tony. It is Gilad who is the danger to the Palestinian people..... BEWARE OF THE LIES AND FABRICATION! Most of what Tony has written is untrue and not factual. Privvy to a bit of inside info, I'll mention a few details in RED

Date: 2008/01/05 Sat AM 01:50:41 GMT From: tony greenstein
> >> To: xxxxxxxxxxxx
> >> cc:
> >> Subject: Re: FW: Anti-Semite Gilad Atzmon Meeting on Monday 7th January
> >> Cancelled
> >>
> >> I went for a meal with my kids and the journalist and her child tonight. Apparently Atzmon has been bombarding her with phone calls, (Gilad made one phone call to the journalist) threatening libel etc. Clearly he's very upset at what's happened in Brighton. Tee hee. I gather he wasn't very complimentary about me or Sue Blackwell (Jean didn't know who she was (Tony, what kind of Boycott campaigner are you if a journalist in your own town doesn't know about the academic boycott that was supposedly lead by Sue Blackwell? And this kind of shows the "impact" of Sue's campaign. I don't know if this news will make her happy) but that didn't stop Atzmon venting his spleen). I felt sorry for her because Atzmon is vile beyond comparison. Georgina Henry, editor the Guardian's CIF had a similar experience of this man. (So now Georgina is your Heroine? But at least she realised that journalistic deontology would obligate her to have a person who was being falsely quoted and taken out of context to present his defense to the accusations, which she then did. Either that, or her paper would face a lawsuit. She is far from stupid). But I feel pleased at a good week's work. (And I'm sure those in Gaza are thanking you).
> >> Yes I know it was tongue in cheek but then churches today are somewhat
> >> different places to their counterparts in the Middle Ages.
> >>
> >> cheers
> >>
> >> Tony
> >>
> >> XXXXXXXXXXXX wrote:
> >> "as church premises are probably the least appropriate venue for a meeting of this kind" - with my tongue firmly in my cheek, indeed both my cheeks, I'm going in for a spot of mischief making but only in this email (no further) ... I couldn't help reflecting that not all that long ago (e.g. middle ages, or Martin Luther &c) church premises were EXACTLY the sort of venues ... &c &c ..... But I appreciate you have to be diplomatic, and anyway, all that sort of thing is now behind them ... er.... except for a few very odd diehards and Christian Zionists playing their own games prior to Armageddon ... Anyway, congratulations, the message is getting through, loud and clear (as loud as Atzmon's sax I guess).
> >>
> >> My tongue is back in its place now, so I can
> >> ======
> >> -----Original Message-----
> >> From: tony greenstein
> >> Sent: 04 January 2008 16:18
> >> To: Brighton Unemployed Workers Ct
> >> Subject: Re: Anti-Semite Gilad Atzmon Meeting on Monday 7th January
> >> Cancelled (LIE AND FABRICATION)> >>
> >>
> >> We are pleased to announce that Brighthelm Church & Community Centre
> >> have confirmed that the meeting that was going to be held with award
> >> winning jazz player Gilad Atzmon, a well-known anti-Semite, has been
> >> cancelled as being inappropriate for the venue in question. (The meeting has not been cancelled and especially NOT for that reason! Fabrication!!)
> >>
> >> When the Brighthelm management became aware of the article in the local
> >> Argus of 29-30th December 07, they immediately decided to cancel the
> >> booking. (FALSE!!!! Ask them yourself how it went. Or better yet, re-read the email from Francis. If you lost your copy, there is one on Peacepalestine to read).
> >>
> >> It should be noted that at no stage did we ask the Brighthelm to cancel
> >> the event or indeed want them to do so as we would have preferred that
> >> Atzmon was brought face to face with the overwhelming hostility of people
> >> to his ideas of Jewish conspiracy theories etc. (NO COMMENT IS POSSIBLE. now MY tongue is in my cheek)
> >>
> >> Tony Greenstein
> >>
> >> PRESS RELEASE
> >> Anti-Semitic Speaker Gilad Atzmon Banned (Banned? Learn your terms.. it's called gig changes venue)
> >> Brighthelm Community Centre Cancels Meeting
> >>
> >> Gilad Atzmon, the notorious anti-Semite and award winning jaz player, (Is this a subliminal blunder, shall you ask your interlocutor, as I thought YOU were a JAZ player)
> >> highlighted in the Brighton & Hove Argus article by Jean Calder on
> >> December 29-30th was due to speak at the Brighthelm Church & Community
> >> Centre on Monday January 7th 2008.
> >>
> >> After being made aware of the controversy, the authorities at
> >> Brighthelm have decided that it would not be appropriate for such a
> >> meeting to go ahead at the Centre.
> >>
> >> Tony Greenstein, Secretary of Brighton & Hove Unemployed Workers Centre
> >> and a founding member of Palestine Solidarity Campaign locally and
> >> nationally stated:
> >>
> >> 'Gilad Atzmon has been widely criticised in the media for his
> >> anti-Semitic comments. He was reported in the Guardian of 17th April 2005
> >> as saying that ''I'm not going to say whether it is right or not to burn
> >> down a synagogue, I can see that it is a rational act.'
> >> http://observer.guardian.co.uk/uk_news/story/0,6903,1461699,00.html
> >> Atzmon has consistently attacked all Jews, whether or not they are
> >> supporters of the Israeli state, as 'crypto-Zionists' and openly
> >> advocated the idea of a world Jewish conspiracy as well as justifying the
> >> Nazi holocaust. (The lies, bullshit, fabrication and falsification are simply too many here to list individually. Those familiar with this blog know what they are, in detail!)
> >>
> >> 'Despite his abhorrent views, we did not call for the meeting to be
> >> cancelled as wanted him to face as large a protest demonstration as
> >> possible in order that he should understand the depth of opposition to
> >> his views. Nonetheless we welcome the fact that Brighthelm has cancelled
> >> this meeting as church premises are probably the least appropriate venue
> >> for a meeting of this kind.
> >>
> >> '
> >> For Immediate Release
> >> For further information contact: Tony Greenstein
> >> PHONE