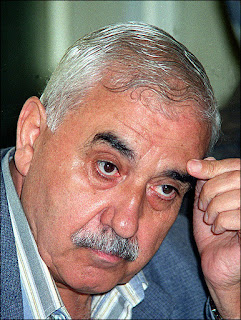 About his uprooting during the 1948 battle of Al-Lid Palestine
Interview edited by: Adib S. Kawar, a chapter of his book "Testimonies of Uprooted Palestinians"
Al-Hakim George Habash was a born leader, the respect of whom was inevitable and willingly accepted by the people around him without demand on his part... generations of young and old Palestinians and other Arabs in complete devotion and dedication to the Arab cause in general and the Palestinian one in particular, which is in its core… Al-Hakim (doctor and wise man) George Habash, made irreplaceable and unforgettable favors to all those who accompanied and worked with the beginning of the Arab nationalist movement and Palestinian Arab struggle on the road of return to the stolen and occupied homeland, Palestine and its neighborhood, that is ours in the past, present and future.

Al-Hakim exhausted his youth and up till the last breath of his life in the struggle for the cause. He sacrificed his promising and lucrative profession as a medical doctor that he studied and worked hard to complete for long years, but he sacrificed the profession, wealth and his health without regret or request for gratitude.

He deserves all the gratitude, respect and admiration by all his people…

Place and date of birth: Al-Lid Palestine 1927
I left Al-Lid twice: The first time to Yafa at age 13 after completing my elementary schooling. I had the patriotic feelings, simply general patriotic feelings, and I still remember demonstrations and resistance that were organized by Palestinian Arab citizens…

In Yafa I joined the secondary Orthodox school, and remained in it up till second secondary. I would like to mention here my Lebanese teacher of the Arabic language, Munah Khoury from the Lebanese south. He left in us a deep and strong impression. Arabic as a language was for him his complete, beloved and full world, he was reciting poetry as if being sung, and I admire him today. I still remember him well. I met him in Beirut when I joined the American University of Beirut, and I learned that he left later for the United States.

As Yafa's school was an incomplete secondary school, I had to move to Jerusalem to join the Terra Santa secondary school. Upon completing my secondary education I returned to Yafa where I taught for two years, and in 1944 I joined the American University. While in Yafa I used to frequently go the Orthodox Club to read newspapers and magazines that came from Egypt, in which I used to read literary and cultural topics.

At the American University I was a top student, paying full attention to my lessons. In my spare time I used to practice my hobbies, especially swimming, and sometimes I used to sing. I had a good voice. Politics was out of my mind, and never occurred to me that I would get involved in it, and that it would become my whole life.

This condition of mine remained constant up till the beginning of my fourth year in the university, my second year in the school of medicine. When one day a friend in the university, Maatouk Al-Asmar, approached me and said that there was a professor in the university – meaning Dr. Constantine Zureik – who was conducting small closed cultural circles, talking to a limited number of students (20 – 30 students) about Arab nationalism, and about the Arab nation and how and why it should resurrect. He suggested to me the idea of attending these circles.

These were lectures the aim of which was enlightenment and stirring debate, and there were no organizational commitments. To be specific, Maatouk told me about a person called Ramez Shihadeh who at the time had already graduated from the university. "I want you to meet him to talk about Arab unity and the salvation of Palestine and how to achieve these goals, but as I was at the time planning to go back home, the meeting didn't materialize.

That was at the end of June/July 1948, when Zionists had been trying to complete the uprooting of Palestinians from their homes and land, which at the time had reached its peak. The year ended and the university closed its doors. I told myself that I should go to Palestine and to Al-Lid in particular. Zionist forces uprooted the people of Yafa to temporally settle in Al-Lid. But my parents asked me to stay in Beirut, and sent me money; my mother was always worrying about me a lot. My arrival surprised the family and my mother said, "What do you want to do son?" And my sister for her part added asked: "What could you do?" I wondered whether I could fight. I had already started studying medicine and probably I could help in this field. There was in the hospital a doctor of the Zahlan family, and I started assisting him.

Al-Lid, like other Palestinian Arab cities and villages was in severe condition of confusion and worry. Zionists airplanes were bombarding Palestinians and frightening them. Conditions were severe and horrible.

I was involved in my work when my mother's aunt came to the hospital and told me that my mother was worrying about me and asked me to return home. I refused and insisted on remaining in the hospital, but she insisted and I in my turn insisted on doing my duty. When I continued refusing then she told me that my elder sister whom I dearly loved had passed away. On my way back home I saw people in the streets in a severe condition of fright, and the injured, including some that I knew, lying unattended on the sidewalk.

We buried my sister near our house, as reaching the graveyard was impossible. Three hours later Zionist terrorists attacked our house shouting and ordering us to leave in Arabic, "Yala Barah, yala barah ukhrojo", go out leave. My mother and I, along with my sister's children –including a baby whom we carried - walked with our relatives and neighbors. We didn't know where to go. The terrorists were ordering us to walk, and we walked. It was a very hot day, and it was Ramadan. Some of those around us were saying "this is resurrection day" and others said "This is hell". Upon reaching the end of the town we saw a Zionist check point to search the people. We didn't have any arms or weapons. And it seemed that our neighbor's son, Amin Hanhan, was hiding money; fearing that they steal it from him, he refused to be searched. The terrorists shot him dead just in front of us. His mother and his younger sister rushed to see him and started wailing. His younger brother, Bishara, was a friend and classmate of mine, and we used to study together.

You ask me why I chose this path, why did I become an Arab nationalist. This Zionism and they speak about peace? This is the Zionism I know, saw and experienced.(*)

Al-Hakim referred us to us for details to the book: "Palestinian Struggle Experience. A full dialogue with George Habash". One of the founders of 'The Arab Nationalist Movement" and "The Popular Front of the Liberation of Palestine", and their first secretary general.