Israeli Democracy: Israel kills a baby, 9 children out of 33 victims in 24 hours! 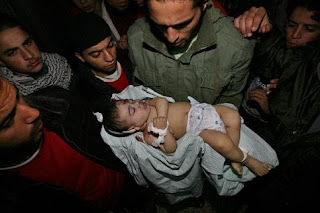 One Palestinian has been killed and three others injured in a raid against a police station in the west of Gaza City. The station is located next to Palestinian Prime Minister Ismail Haniyeh's house.

Dr. Mu'awiya Hassanain, head of emergency and ambulance services in the Palestinian Health Ministry, said that ambulances transferred the dead body and the casualties to a hospital in Gaza.

Four Palestinian children were killed in an Israeli air raid in the Jabalia refugee camp in the northern Gaza Strip on Thursday afternoon, bringing the number of those killed in the Gaza Strip to 27 in the last 24 hours. Eight of the dead are children. Hasanain said the bodies of 11-year-old Deib Darduna and 14-year-old 'Umar Darduna arrived at the Kamal Udwan hospital in Beit Hanoun torn to pieces. Meanwhile, the bodies of 7-year-old Muhammad Hammuda and 8-year-old Ali Darduna were taken to Ash-Shifa hospital in Gaza City.

A short while later, an Israeli unmanned reconnaissance plane launched a missile at a car in Beit Hanoun injuring two people, one of them seriously.

Israeli raids on the Gaza Strip have been continuous throughout Thursday.

At around 9:30 on Thursday morning local time, Israeli warplanes fired missiles at Palestinian civilians in eastern Gaza City killing senior Hamas leader and Palestinian Legislative Council member and Hamza Khalil Al-Hayya and 23-year-old Jawad Tafish. Several others were also injured. Mu'awiya Hassanain, the director of ambulance and emergency services in the Palestinian health ministry told Ma'an that Ash-Shifa hospital in Gaza City had received one of the dead and several people who had sustained serious injuries.

On Wednesday evening, three Palestinian children were killed and six others injured in an Israeli air strike on the Al Taw'am area close to the Khazandar gas station, north of Gaza City. One of the dead was 5-month-old Muhammad Nasser Al-Borey, who was in his family home when a missile struck the building.Mu'awiya Hassanain, said that ambulances transported the injured and dead children, including the headless body of a child, to the Shifa' and Kamal hospitals.

He added that five children were rushed to the intensive care unit and the operating room, with one clinically dead.Witnesses said that those involved were passing by a local-made missile launcher that was struck by the Israeli forces.Earlier on Wednesday, two Palestinians were killed and two others injured when Israeli artillery targeted an orange grove in the Ash-Shuja'iyya neighbourhood in eastern Gaza City.

Hassanain said that one of the dead was identified as 27-year-old Minwir Abu Mandeel, who worked as a guard at the grove. The second victim's identity remains unknown as the corpse arrived at the Kamal Udwan Hospital so badly damaged that it was not possible to identify the victim. On Wednesday morning, five Al-Qassam Brigades activists were killed, and several bystanders were injured, after Israeli helicopters launched two missiles at a car in western Khan Younis in the southern Gaza Strip.

Eyewitnesses told Ma'an's reporter that the car was targeted near Al-Aqsa University.In another Israeli raid on Wednesday morning an Islamic Jihad activist was killed and two others injured when an Israeli unmanned drone targeted two sites east of Al-Bureij refugee camp in the central Gaza Strip. A spokesperson of the the Al-Quds Brigades, the military wing of Islamic Jihad, said that the victim was Zaky Abu Zaid. The wounded were evacuated to the Al-Aqsa Martyrs hospital for treatment.