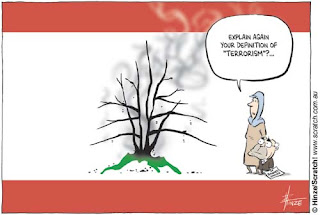 I will be attending these sessions in Bruxelles this weekend on behalf of Gaza Vivrà. I will write a comprehensive report upon my return.

An international citizen's tribunal on the crimes committed by the Israeli army in Lebanon JUSTICE FOR LEBANON! Feb. 22-24, 2008, Brussels Int'l Jury Schedule

The deeds committed by the Israeli army and secret services in Lebanon, as in the occupied Palestinian territories, is a violent affront to the universal human conscience. These are criminal acts, as many people feel instinctively. They are different from the acts that take place in all armed conflict committed by the aggressor as well as by the aggressed. But feeling is not enough. The facts must be established. They must then be assessed in light of existing international law. This should be done with the detachment and rigour of a process that excludes any a priori conclusions, the results of which will convince all people of good will.

The international community is not an autonomous political and juridical body. It is but a summation of positions adopted by a certain number of governments. In many situations it has proved incapable of applying existing law by distancing itself from geopolitical or ideological contingencies. This impunity has covered up the numerous war crimes and crimes against humanity that have been committed since the end of the second world war.

The unilateral attitude of the United States of America, like the double-speak of many European governments, make it necessary for those defending the law to take the place of failed political powers. The American administration is against any questioning of Israel’s role in acts committed in Lebanon as well as in the occupied Palestinian territories. Germany, Great Britain, Finland and France refuse to support a request formulated at the UN Human Rights Council to investigate the use by the Israeli armed forces of arms that are prohibited by international law. The systematic disinformation practised by an overwhelming majority of the media deprives Western public opinion of balanced information. All this justifies an initiative by the citizens themselves.

This initiative must aim at being of the same high quality as the tribunal initiated by Bertrand Russell during the Vietnam war. It should be carried out with the same rigour, the same credibility and the same concern to go beyond divisions which have no place when it is a question of the rights of people. It must bring together highly qualified experts and personalities who are universally recognized for their moral authority. It must not limit itself up to a restricted circle. For this reason I believe it should not follow in the footsteps of similar initiatives taken in the past, whatever the quality that such work has achieved in the past.

Such an action cannot be carried out properly in a hurry. It requires the formulation of a comprehensive project, together with a precise timetable, the mobilization of appropriate human and financial resources and an irreproachable moral framework. These requirements demand an international mobilization to support such an initiative.

Leila Ghanem
Anthropologue
Forum Mondial des Alternatives
Lilia.ghanem@yahoo.fr
Tel Port: 06 15 26 31 14
JUSTICE FOR LEBANON! Feb. 22-24, 2008, Brussels Int'l Jury Schedule
INTERNATIONAL JURY OF CONSCIENCE FOR LEBANON
International Associations Center
Washington Street, 40
Brussels, February 22 - 23 - 24, 2008
Program
Friday February 22
8:30 to 11:15 p.m.:
· Opening, reception and general presentation (15 min)
· Declaration of the International Peoples Tribunal (15 min)
· Declaration of Jury on the decision to consider only the actions of the Israeli army (15 min)
· Reading the indictment (90 min)
· Reaction of the defendant (30min)
Saturday February 23:
The morning: victims
From 9:30 to 11:30 a.m.:
· 8 victims will testify (15 min each one)
From 11:30-to 11:45 a.m.: coffee/tea break
From 11:45 a.m. to 12:45 p.m.
· testimony from the mayor of a village (30 min)
· testimony from the mayor of a city (30 min)
From 12:45 to 2 p.m.: Lunch break
The afternoon: witnesses
From 2 to 4:30 p.m.:
· the Lebanese Red Cross (30 min)
· Green Peace Lebanon (30 min)
· A Lebanese economic institute (30 min)
· The international NGOs (20 min each one)
From 4:30 to 4:45 p.m.: coffee/tea break
From 4:45 to 6:45: statements by 4 Lebanese lawyers (30 min each one)
The evening: round table with Lebanese and international journalists
From 8:30 to 11 p.m.: four Lebanese journalists will dialog with a French journalist, a British journalist and a Belgian journalist. The debate will be chaired by a European member of Parliament.
Sunday February 24:
From 9:00 to 10:00 a.m.: statement of Dr Hugo RUIZ DIAZ BALBUENA, attorney and representative of The Association of American Attorneys at the Human Rights Council of the United Nations
From 10:00 to 10:45 a.m.: statement from a representative of Amnesty International and a representative of Human Rights Watch
From 10:45 to 11:00 a.m.: coffee/tea break
From 11:00 a.m. to 12:30 p.m.: statement from a representative of the Human Rights Council of the United Nations
From 12:30 to 2:00 p.m.: Lunch break
From 2:00 to 3:00 p.m.: indictment
From 3:00 to 4:00 p.m.: reaction of the defendant
Starting 4:00 p.m.: Jury deliberation
At 5:00 p.m.: Read the verdict
The jury is composed of five people, one from each inhabited continent, each of them judges by profession.
The entire hearing will be recorded and filmed. The debates will be translated simultaneously into English, Arabic and French.
Various documents and reports/ratios will be placed at the disposal of the public. A bookstore will be accessible.
The hearing will take place in a room holding 250 people. Videos will be shown in an adjoining room.
"The International Jury of Conscience for Lebanon” is a project which intends to develop the struggle against impunity regarding the crimes committed, which intends to promote international law and in particular human rights and which places the respect of fundamental human rights above any other consideration. The discussion will proceed in greatest serenity and the publicity that arises from it will reside exclusively within the framework of human rights. It will question only the facts that occurred during the conflict of July-August 2006 in connection with the respect of these rights. This project does not include a political debate on the question of the relationship between Israel and its neighbors, nor about the Palestinian question.