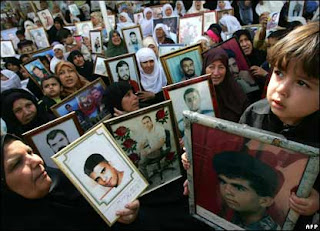 Disgrace for Democracy, Israel is detaining right now 40% of the Palestinian MPs who represent the people
Sponsored by:
Iqbal Tamimi Creator of Palestinian Mothers Network
Disgrace for Democracy: 51 Palestinian MPs and Ministers are Detained in Israeli prisons along with 11.870 Palestinian citizens
A serious crime and new political slap in the face for democracy is committed by the Zionist system against representatives of the Palestinian people by the abduction of the Palestinian ministers and MPs.
The latest of which was the arrest of MP Ahmed al-Haj from the city of Nablus on 16/12/2007. Al-Haj is over Seventy-years old.
Earlier on the 10th MP Dr. Maryiam Saleh Minister for Women in the Palestinian government has been abducted too. Dr Mariyam is a member in the Legislative Council from Ramallah governorate.
The Minister of Palestinian Prisoner is in prison since many years... for the fifth time.
There are more than 11.870 Palestinian prisoners in Israeli prisons, 117 of them are mothers. Some give birth while chained, and their children are forced to live in the cells where they do not live their childhood or play or go out.
I don't have to tell you about lack of healthy conditions, or medical negligence. Some prisoners are denied warm clothes sent to them by their families. They are held in 30 different prisons, and detention centers. 1189 prisoners are schools, collage, and universities students of both genders, 330 of the detained are children. Not only the students were detained, but their teachers too, there are 107 Palestinian teachers in Israeli prisons. 1150 Palestinian prisoners suffer acute illnesses.
A large number of the detained are denied visits by family members.
Thousands of Palestinian detainees in the Negev desert prison and other detention camps such as Ofer prison near the town of Ramallah, Hawara, Qadumim, Megiddo, Nafha, Beer Sheva, Ashkelon and other prisons are shivering from the cold under waves of rain and snowfall coming from northern regions of the world especially that some are detained inside tents made of cloth surrounded by walls open to the cruel cold of the desert, living in wet tents caused by snow falls and rain, sleeping on boards made of wood which gets soaked wet.
Soon, April 17th is the International day of prisoners. I hope you can join in denouncing what the Israeli government is doing to those prisoners, and demand their release to join their families.
Do not rely on journalism to get the news, journalists were the first to be attacked and harassed so that you do not know what was going on.
The records documented 1147 aggressive attacks on journalists by the Israelis. Only between 28th of September 2000, and 31st of March 2007.
Please sign the petition and buy those prisoners some happiness.
We are hoping to get at least 11.000 signitures, one for each prisoner, and present this petition to International Human Rights bodies like Amnesty International, and United Nations. Please Circulate this petition to all the people you can get the message through to them. It is about time we show solidarity for each other on human level.
http://www.thepetitionsite.com/1/release-11000-palestinians-in-israeli-jails