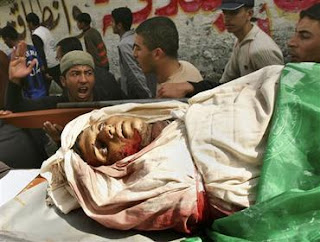 source Kanaan Online (thanks to Nadia Hasan for the forward)

· What is going on in the mind of a Palestinian infant in the last moments of his or her life when a US/Israeli rocket strikes him/her?

· What do Israeli military leaders tell their pilot when he shows them the picture of that infant?

The most important question, however, is somewhere else: What are the reasons and who is really behind this holocaust?

The main reason can be summarized as “No Resistance in the Era of Globalization” (NOREG). This should remind us of the fact that US neo-cons regime, western capitalist regimes, and Arab comprador regimes support and encourage Zionists to wipe out Hezbollah as the main force of resistance in this era. That is why, the war of summer 2006, was a precious gift for Arab regimes. But fortunately, the results were deeply disappointing.

Since 2006, if one does not mention the holocaust in Iraq, Arab regimes and the Palestinian Authority (PA) stand in the camp of: “No Resistance in the Era of Globalization” NOREG.

This is an international camp. It transcends national, ethnic, religious and ideological boundaries. That is why, Arab rulers, Zionists, US neo-cons, Anglo-Saxon, French, German regimes are in one camp.

Accordingly, the war against Gaza is a decision from a terrorist leadership of all these regimes, and the Zionists are its paw. It is the war of regimes and ruling classes that is aimed at liquidating all forms of resistance.

Any Palestinian, Arab or Thirdworld-ist who stands on the line of resistance is a candidate for termination: Baghdad , Gaza , Lebanon , Serbia …etc are all fields for implementing this rule.

Rockets are not the Reason

Those who pretend that rockets are the reason behind the current Zionist massacre are liars. If we have to look for a reason for that massacre, it should be found in the1948 Zionist occupation of Palestine, the eviction of Palestinians from their homeland, and the Zionist insistence on terminating the Palestinian Right of Return (RoR) by all means. Three quarters of the population of Gaza are refugees who were evicted as a result of the occupation of Palestine in 1948, and who are part of a large community of Palestinian refugees amounting to 6.5 million scattered all over the globe. Why shouldn’t they resist?

The Zionist regime, US and most of western capitalist regimes, and later many Arab regimes are hand in hand supporting the Zionist settler and criminal regime working on terminating the RoR. Oslo Accords follow the same direction albeit it is not directly written in their text.

It should be also noted that Palestinians are the only native people who still resist the white settlers, while in other white settlements, i.e. USA, Canada, New Zealand, Australia, the native people had been mainly terminated while some have given up the struggle.

Will there be a big war?

This form of question is a simplification of facts. Israel does not need more than this level of holocaust against civilians. It is in Israel’s interest to force Palestinians into another mass eviction than to kill all of them at once. Zionists have never changed their plans: to occupy Palestine in its entirety, but ….void of its people. That is why; they prefer Palestinians' self- ‘transfer’.

Of course, this does not eliminate the possibility of launching a massive war against Gaza or a massive destruction as the Zionists did in Lebanon 2006[1] considering the fact that the camp of globalization in their support. It is not an exaggeration to note that the transfer of Palestinians is a real possibility now.

One of the reasons for delaying a more extensive war is the Zionist expectation that they will lose more soldiers in a fierce face to face battle, a loss they are never ready for. For a colonial settler entity that fights for importing more settlers, losses of soldiers is of catastrophic consequences. The Zionist entity, Israel, is the only white settler regime that is still ‘buying’ new settlers, while the US white settlement is building a wall against Mexican immigrant workers who are fighting to enter the country even as slaves. During 2007, the number of settlers who left the Zionist regime exceeded the new incoming immigrants.

A year or so ago, the PA repeated that some al-Qaeda fighters are in Gaza. Later, the PA and some Arab rulers repeated the same lies and accused Hamas of facilitating the infiltration of al-Qaeda militant to Gaza.

This propaganda is another war against resistance. As a matter of fact, many do not buy the story that there is a single al-Qaeda organization. I believe that the NOREG consider any militant all over Arab, Islamic and even Third world as al-Qaeda. Even if there is one single al-Qaeda, the question is: Who created it? Who started terror in the modern world history? It is the western capitalist regimes and later the comprador capitalist classes in the periphery against their own people.

The most dangerous part of the peoples’ enemy propaganda is its ability to mix all Arab and Islamic militants in one pot[2] and show that they are the so-called al-Qaeda or the Salafi!

One of the bad results of this subjugation is that they confirm that Arab people support Salafiyah! That is why; Zionists and many western leftists used the victory of Hamas to ‘prove’ this pretence. These Arab writers failed to explain that in the Occupied West Bank and Gaza Strip and other Arab countries, the people have to choose between PI and the comprador which betray their history, memory, present, and future.

As long as these Arab leftist writers help the deformity of PI groups, they are, whether they mean it or not, placing socialist/Communist Arabs in the camp of imperialism. This, in fact, delays the re-emergence of an Arab radical left.

If Hamas wants to create something, it will not create al-Qaeda; it will create other fighters for Hamas! But, since the war machine is that extensive and is declared against the Palestinian people, why would not Palestinians create many al-Qaedas?

This is another dimension or reason of the massacre in Gaza. We must remember that Arab regimes were and still are terrified by the Palestinian struggle. When the first Intifada erupted, the goal of Arab regimes was to keep their citizens away from its influence. When Hezbollah liberated South Lebanon, and later defeated the Zionists in 2006, Arab regimes were devastated.

When Hamas won the Palestinian elections in January 2006, Arab regimes were terrified again, and a global, though gradual, coup d'état started against it. The crisis reaches its peak when Hamas defeated Fateh in June 2007.

Consider the following developments: the Zionist aggression in Gaza is a protection for Arab regimes from the expansion of this phenomenon. One should keep in mind that these regimes are ready to pay any price to avoid the provocation of their suppressed people.

Anyone who believes that the Zionists will reduce their aggression, is either naïve or cooperating with them. It is an entity that was created against the Arab Homeland especially the Palestinian people. That is why, they have no alternative but to prove and emphasize their role.

If radical people in the region want to re-build their power and to fight for a united Arab socialist Homeland, defeat of the Zionist regime, and achieve the RoR, they must first start their battle against two local groups:

· The various groups of local intellectuals: the westernized, renegade communists, NGOized political activists and many academicians who are tied (and financed) in one way or another, by the bloody regimes of the United Sates, many other western regimes, and even the Zionist regime.[3]

[1] The arrival of the US Cole warship to the Lebanese shores is a direct threat for another destruction of that country.

[2] That is why; the comprador regime in Morocco arrested lately some leftists with Political Islamists. It should be noted that these arrests are in fact directed against the influence of Hezbollah of Lebanon as a new current which is not a fundamentalist. It might attract leftists as well.

[3] A very recent example of those intellectuals is the Moroccan poet Abdullatif Al-Lua’bi, who is visiting the occupied WBG now during the mass extermination of Palestinians in Gaza under occupation invited by the French Cultural Center. For those who are not familiar with the issue of normalization, any Arab who visits the occupied WBG is in fact normalizing with the Zionist occupation and recognizes the Zionist regime.

The Author is a Palestinian Marxist Economist living in Ramallah.