Dealing with Death and Destruction: in Southern Lebanon and in Beirut 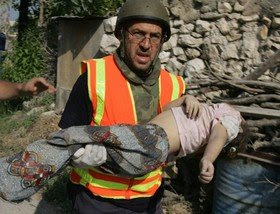 Two witnesses give their testimonies at the Bruxelles Tribunal for Lebanon, Salam Daher and Dr Hayder Decmak
(in the photo, Salam Daher and one of the victims of the Qana Massacre)
Salam Daher has been a relief worker in Southern Lebanon since 1985, practically his entire adult life. He has seen his share of misery and catastrophe, but nothing prepared him to face what the Israeli acts of war would force him to witness. Mr Daher is an attractive and rugged man who exudes a sense of humility and strength, exactly the qualities that are required for one who has to remain “grounded” in order to respond to the wounded in the best way. Himself a victim of the war, hospitalised for 55 days and still undergoing rehabilitation treatment, he is a living example of the motto of the Lebanese Red Cross, “Sacrifice without limits”. “No matter what it might bring to us,” he said, “we have to be ready to sacrifice ourselves, whatever the price.”

In the Bruxelles Tribunal, he presented a testimony of a number of events that he was involved in. All of them show an extreme gravity in the kind of situations that the citizens and the rescue crews were dealing with. Listening to the testimony, I could not help but think of the urgency and the shock, but also of the stress of knowing that the lives of other people depend on one’s competence in extreme situations. So many of the events were things that are not considered to be acceptable even according to rules of war. One of the first events he mentioned was the killing of Layal Najib, a photojournalist murdered by Israeli bombs on the road between Siddiqine and Qana. Her vehicle was clearly marked as carrying a journalist, but this did not spare her life. 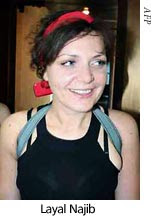 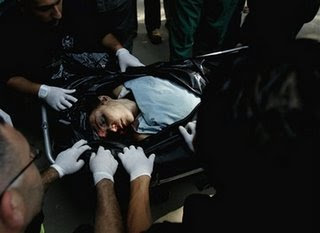 In the photos, the young photojournalist, with all her life before her, and after the Israelis decided she's lived long enough.

In another day, at the start of the war, he was attempting to ask UNIFIL to allow a group of people to leave the area and seek refuge in presumably safer zones. Mr. Daher recounts that while he was on the phone with UNIFIL authorities, asking how to proceed in rescuing those who were arriving to the Red Cross after having been the survivors of a previous attack, their convoy was bombed. He surmised that the idea behind this might be to leave no witnesses of the first attack. 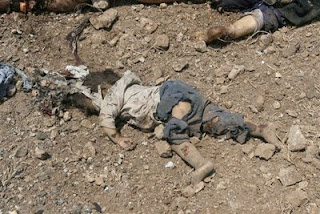 On another occasion, the UN was aware that a building was going to be bombed. They hastily departed, leaving the Lebanese people to their own devices. At the Marwaheen Massacre, when a convoy of civilians were refused shelter by the French UN forces in the area and were subsequently bombed. (In the photo, some of the vitims of the bombing from F16 fighter planes.) All of this, the International Red Cross were aware of, but they themselves provided no instruments and were not allowed to intervene. They permitted one ambulance and one escort per day in specific areas. Yet, only one patient could be rescued, and the bombings always had multiple victims and seriously wounded. When an ambulance was provided, the coordination was such that a 48 hour time period passed between the moment permission was given and the moment of the rescue action.

“There was a deliberate aim to obstruct relief actions. They wanted to oblige people in the areas of bombardment to leave, but then, Israel wanted to bring about as much damage and death as it could in order to undermine the resistance. It was deliberate. I say this because even after permission was given, and it had to be coordinated with UNIFIL and the Israeli authorities, the areas and roads were bombed.”

One of the lawyers asked if a formal complaint was made to the ICRC. “No, we did not follow up after the war. If you complain, you get nothing. We are used to it and besides, our objective was the people, rescuing the people, and the people know it.” While it might seem odd to some that a rescue worker would give a political motivation to the events, in the situation of the Israeli war against Lebanon, the question “why?” was always in the forefront.

“Why?” was one of the questions the world asked following the Qana massacre, where two extended families were exterminated. Mr Daher was there, and the horror of seeing civilians, especially infants, killed in such a way left an indelible sign. In fact, there are a few very strange Zionist blogs that attempted to accuse the Qana massacre of being staged, and indeed, they pointed out that Mr Daher was in various rescue missions in the South, therefore, he must be some kind of propaganda tool. What seems very interesting to note, when faced with the reactions of the world public to the massacre of Qana, Israel’s Foreign Affairs Minister Dan Gillerman replied at a pro-Israel rally in New York, “To those countries who claim that we are using disproportionate force, I have only this to say: You're damn right we are.” It is evident that Israel knew what they were doing, so why would they think others would be oblivious to it, especially those who were in the zone responding to the calls for ambulances and paramedics? Furthermore, it is not unreasonable that rescue workers go from one town to another. My husband is a volunteer for the Red Cross and they make themselves available for very considerable amounts of territory, if the need arises.

Another witness who gave a testimony at Bruxelles was Dr. Hayder Decmak, a Beirut physician. “It was 33 days of total medical emergency,” he stated. “Five hospitals were bombed. The Israeli Air Force acted to stop the Hospitals from working. Seventy-seven percent of the people who came to be treated and should have had hospital stays could not find shelter. Israel was monitoring everything and they gave their Air Force permission to hit hospitals. But it did not stop there, as we know. Many of the patients who came to us were bombed while on the road. The Air Force had the permission, or they were ordered, to hit anything that moved.”

When asked about the personnel to treat the wounded he replied, “We tried to do all we could, but conditions were dramatic. During the war we could not even depend on the international organisations that should have been there for us because they were never given any security cover and therefore could not move effectively enough. I must say that we saw few humanitarian workers, especially in the south and in Southern Beirut.”

He described the dramatic situation also in other terms, “There was a constant sound of destruction, which caused great psychological stress and in many cases, permanent trauma. Part of the dramatic nature was the fact that there was no way to escape. People could flee, in theory, if they had someplace to go, people living in faraway places, but there was also the prohibition of travel and enormous damage to infrastructure, making the seeking of refuge impossible even for those who might have this as an option. Everyone was a target, to be quite clear. Even the Lebanese Red Cross was targeted. There was a particularly grave incident in the north, near the Syrian border, where many were fleeing, in which men were murdered by Israeli bombs. They were clearly targeted and killed.” One of the judges asked if they were members of the militia. “No, they were distributing bread to those on the road.”

When asked about the aftermath, the Doctor concluded in this way, “A serious matter was the fact of not knowing the whereabouts of people’s loved ones. Everyone was aware that someone they loved, family members, could be dead, but it was also true that many found out about it only days and weeks after the fact and this prolonged and deepened the suffering. It is something that normally would destroy a society, this kind of tension, but in fact, it did the opposite. The Lebanese did not turn against one another, and in spite of the problems that our country faces, our civil society, together with the NGOs, will do what it can. Together, we take responsibility to see that there is justice for our people.