Families of Victims of the Lebanon War Testify

At the left, Mr Shokr holds a piece of the US-made rocket that destroyed his house.

At the Bruxelles Tribunal, several people represented the victims of the war. It was very interesting to note how different these people were from one another, judging by the type of presentation they wanted to share with us. Yet, at the moment of questioning by the lawyers and judges, they all came to the same conclusions about their experiences.

The first witness was a gentleman named Mohammed Shokr. The story of his family was an incredible odyssey of seeking refuge in a moment when the family was being reunited after much time spent far from one another. His family lives in Belgium and what should have been a simple family holiday when the grandparents and aunts and uncles could spend time with the children living in Europe became a nightmare of death and total devastation. They were in the village of El Nabi Chit, near Baalbeck in the Northern area, and when the bombing started to be frequent, thought that it would be a good idea to leave and go to their house near the Beirut Airport. Belgium had already asked her citizens to leave Lebanon entirely, but this possibility, as the days passed, was growing ever more remote. When they arrived in Beirut, they were once again victims of shelling, and the decision was made to go to a Christian village where a family member lived. “We thought this would be the safest place after our other homes had been shelled.”

Mr Shokr is a man who demonstrates a very direct kind of character. He knew that he assumed the responsibility for the safety of his extended family, and what was very sad was seeing that he realised that even the most reasonable and wise choices were turning out to be foiled by what Israel had decided to dish out. This man represented not only a pater familias, but by listening to his testimony, I could feel that his situation was a macroscopic example of the impossible search for refuge in a country that was targeted as a whole, with every inch of Lebanon being a potential front.

“We were looking for shelter, but on the road we could see that there were no military targets anywhere, just things that served people were bombed. Things such as petrol stations, bridges, roads. It was like being in a trap.” And, the worst trap of them all turned out to be the home in the Christian village in the south. “All of a sudden, the sky was raining nails and rockets.” The family sought protection in the deepest part of the house, underneath the staircase, yet that too was disastrous. “We didn’t know that American bombs can go everywhere.” As a matter of fact, Mr Shokr brought fragments that he took from within the house. They were large bits of rockets and fragments of shrapnel. “This bomb was an American present signed by Israeli children and sent to our children in Lebanon.”

It is apparent that bombs that penetrate and do not simply explode (as later in the day and the following morning we were able to witness three presentations on the weapons potential) and break apart what they are hitting. These bombs dig deeply and then erupt in their full force, and they are considered to be unconventional weapons. The meaning of this, I will explore in the articles that explain more fully the weapons used in the Israeli war against Lebanon, yet generally, they are weapons that are differentiated from those that are “recognised”. They may differ in the materials used and in the effects that are different from traditional weapons. Often their impact is unpredictable and very often they violate standard rules of war by their force that is not proportional to the type of target they are used against. When Mr Shokr was asked if they were unconventional weapons he answered with clarity and wisdom, “We are civilians. We don’t know the difference between what is conventional and what is not. If a bomb comes inside your home, you know that this is wrong. Morally, we also know that if one is capable of killing one person can kill a group of people or kill everyone.”

He wrote a book on the destruction of Baalbek and El Nabi Chit which told of the tragedies of his hometown. He summed up the situation of his own family in this way, “We had to decide to run, and then to start running. We took the car at night, without any lights because we understood that we would be moving targets. Then we had to keep running, seeking shelter. When there is fear, you run, but you may never find the shelter, no matter where run.” 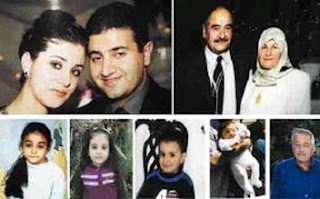 A second witness was Hassan Al-Akhrass, a citizen of Canada whose flight was to leave for Lebanon allowing him to join his family the day before all flights had been cancelled. This spared him his own life, but tragically, it did nothing to save the others precious to him as they were crushed under the rubble of their own home in Aytaroun, destroyed by Israeli bombs. He lost 12 family members in the war, including his father, his uncle, his cousin and his wife and four small children and their grandmother. Other family members were wounded. He decided to bring photos of his loved ones in happier moments, days before their lives were taken. There were pictures of them by the sea, babies in the arms of their mother, children being cuddled by their grandparents, beautiful smiling faces that no longer exist if not in the memories of this man, and whose story he put on a DVD called “In the Line of Fire”. In the composition here, we see some of the victims. To spare older family members the grief of learning the fate of their loved ones, it was decided to not reveal the news of the deaths to those who might not be able to handle such pain. Frequent questions about the family’s whereabouts could not be kept unanswered forever, and that compounded the sense of helplessness. “My real hope is that there will be justice for them.” Looking at the innocent faces of these people, and considering the tragedy of the loss of their lives, it is the least that we should expect, and all of us owe them this much.