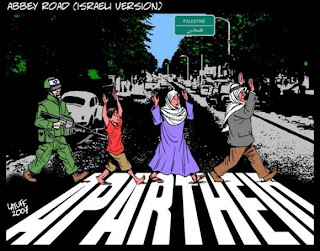 from an email by Lana Habash
Zionists walked into a well-known center for left activists in Boston this week and managed, with a single complaint, to take away an already agreed-upon meeting space for an April conference on Palestine organized by the New England Committee to Defend Palestine. Around March 9, the local branch of a national group called the Jewish Labor Committee told the director of Encuentro 5 and the landlord of the building that houses Encuentro that the New England Committee to Defend Palestine is a "hate group" and demanded that it not be allowed to hold the conference in Encuentro' threats.

Beneath the facts of the case lie a number of ironies:

* Encuentro bills itself as "a space for progressive movement building" in Boston (http://www.encuentro5.org/ ).

Massachusetts Global Action -- the organization that runs Encuentro--argued the need for a "tactical retreat" and offered us $400 and help finding another venue if we would consent to leave. We told them that this would undermine the meaning of our conference, their own work, and the movement as a whole. Our suggestion to Encuentro was to take this matter to the activist community -- to the people who use the space -- to tell them what was taking place and invite them to help organize a struggle to defend the integrity of our collective work.
Zionist organizations like the JLC have more material and political power than perhaps at any time in the past. But this power is increasingly hollow, since it must increasingly assert itself by shutting down a discussion about that power--a discussion that is growing and moving into the mainstream. The JLC did not succeed by persuading Encuentro 5, but by threatening them through the building's owners. These are clearly threats that they have the power to carry out--a fact that proves what critics of zionism are saying.

But this also demonstrates that while they have more material power than ever before, they have less ideological support than ever before. The legitimacy of the zionist project--the passive consent given to US support for "Israel"--is collapsing. That collapse must come before the serious fight over material power--a fight that is coming.

We are disappointed that Encuentro 5 and Mass Global Action decided that it was not strategic for them to challenge this abuse of power now. We know that the repercussions might well have been severe, and recognize that this would affect a great deal of effort and work that has gone into building their organization. We offer the following as a challenge--not so much to them, but to the movement as a whole, since finally the question is not about any of our specific, struggling organizations:

Can we build a movement against imperialism, or against social injustice in the United States, if the limits of our discussion can be set by organizations like the JLC--organizations that are committed to ensuring that billions of dollars in US military and economic support are given yearly to one of the most militarized colonial states in the world?

There is widespread discontent with zionist power. This discontent will not turn itself into a meaningful response until it becomes organized around specific battles. This can only take place if at some point people are willing say "it stops here."

* "Progressives" are not progressive. The "progressives" are the Jewish Labor Committee, which calls itself "the Jewish voice in the labor movement." The JLC did not come in from the outside but actually has an office in Encuentro's own space. The Jewish Labor Committee's web site http://www.jewishlabor.org/ shows its president, Stuart Applebaum, standing proudly with war criminal Shimon Peres in February in Jerusalem. The JLC has put out a statement condemning the Palestinian call for boycott, divestment, and sanctions against "Israel." The JLC statement asserts that Israelis, who have brutally occupied Palestine for 60 years, carrying out a program of genocide ever since, should not be seen as "victimizers."

The progressives are UNITE-HERE, the brave union for oppressed garment and hotel workers, which acted in this fiasco as a landlord bully threatening to kick out tenants for political speech.

* The criminal has accused his victim of the crime. The real hate groups are those who support genocide in Palestine. The Boston Jewish Labor Committee's accusation that the conference organizers are a "hate group" comes right out of the manual of the Anti-Defamation League which has gone to great pains to define political speech and action as good or bad in terms favorable to the zionist project. The ADL is a "progressive" organization -- it seems to be for the right thing, except when it comes to criticism of "Israel." Criticism of "Israel" is anti-Semitism -- that's hate speech, that's against the law. The ADL was part of a recent attack on a mosque being built in Boston. It was exposed for lobbying Congress against a bill that condemns the Armenian genocide. During the late '70's and early '80's, it spied on organizations in the U.S. that supported the struggle against white supremacist apartheid in South Africa. This do-good "no place for hate" organization is actually a front group for a racist foreign power.

The limits of political speech on the left are now being defined by the very organizations who say they're working for the good. There is no open debate. The idea is to simply prevent political speech. Why is support for a nasty racist state in occupied Palestine driving so much of US and international politics? And the question goes beyond Palestine, since these same organizations have the power to set limits on the discussion of "social justice" and racism here inside the US. This includes a history of demonizing black nationalists like Malcolm X, Stokely Carmichael, and the Black Panthers as "anti-Semites." In many cases people's careers have been ruined and their reputations smeared by forces who never came out in the open. Joseph Massad, Tony Martin, Ward Churchill, and most recently Catherine Wilkerson, are examples. Ward Churchill will be among the speakers at the conference.

The New England Committee to Defend Palestine assures all those who have been invited to and registered for the April 12 and 13 conference that we have secured another venue and will be announcing it soon. We couldn't have provided a better example of zionist interference in anti-imperialist activism than the one that just happened here. We have great speakers coming from many different movements. We hope that supporters of the struggle in Palestine, and all those who recognize the need to build a truly independent opposition to oppression inside the US, will join us for this event.

On the 60th Anniversary of the Nakba
the New England Committee to Defend Palestine presents
Struggle for the Land:
Zionism and the Repression of Anti-Colonial Movements
An Education and Strategy Conference
Saturday, April 12 to Sunday, April 13
Location to be announced.
Boston, MA
Suggested Donation: $15

This year commemorates the sixtieth anniversary of the Nakba (Arabic for 'catastrophe') in Palestine. While this past January saw an escalation of the already brutal strangulation of Gaza, as well as continued colonization throughout historic Palestine, Palestinians have continued to resist in all of their historic land. In Gaza, under starvation conditions, Palestinians broke the siege by destroying the wall at Rafah crossing and continue to defend their land through armed resistance against settlers.

In spite of a wider public awareness of the brutal policies of colonial settlement in Palestine, the "United States" continues to provide the main economic, political and military aid to the Zionist settler colony. While every major presidential candidate pledges undying support for "Israel," there is a growing public discussion about the role of Zionism in the "US" political system, and especially of its relationship to the war in Iraq.

Zionism has played a role not only in defining "foreign policy," but also in the suppression of anti-colonial movements here-not least of all, because these movements have recognized the Palestinian struggle as part of a common global struggle against colonialism. In order to suppress the emergence of a serious pro-Palestinian bloc of oppositional power, Zionists have attacked genuine leaders and organizations, while at the same time cultivating less radical alternatives.The combination of "Israeli" political ties to imperialist policies abroad and Zionist opposition to anti-colonial liberation movements here, has led to a repressive collaboration between Zionist political organizations, "Israeli" and "US" police and intelligence forces, mercenaries, and corporations in the private "security" sector.Confronting Zionism is crucial to any movement forward against militarism and internal oppression.Bringing together representatives of several movements, our conference will focus on two themes: Zionist disruption of anti-colonial movements and land as the basis of struggle and solidarity.
For more information and to pre-register, go to www.onepalestine.org Co-sponsored by Jericho Boston http://www.jerichoboston.org
NECDPPO Box 681East Boston, MA 02128