Gaza is victim of a unilateral war! STOP ISRAEL!!!! 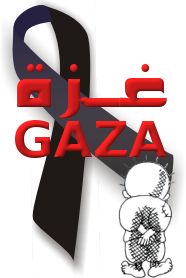 Israel is conducting a unilateral war against the population of Gaza. IT CANNOT BE TOLERATED! There is no excuse!!!! On the left, please see the Black Ribbon that Sabbah's Blog has set up. Created by his friend Za3tar, it is suitable to attach to your letters, sites, anywhere you want people to see that we are in mourning and we support our beloved and cherished brothers and sisters in Gaza.

From the PCAS, we have horrible, ghastly reports. This is from last night:

Israeli Genocides, Holocausts & Massacres: 55 Victims in 12 hours, names included
Anna Goldman reports from the Gaza Strip
PCAS: www.freegaza.ps/english
Gaza Strip, 1st, March, 2008, (PCAS)- Since the early morning, the Israeli holocausts against Palestinians have started. About 10 of freedom fighters died but the majority was 45 victims from civilians.

The holocaust which was declared by Matan Vilnai, Vice Israeli defence (War) minister, yesterday is being launched by today morning with confines. Diverse sorts of weapons, such as F16 and Apaches planes were used. In addition to using heavy guns, bombs, missiles and cluster bombs as well.

Attalla Family was exposed to a 1-ton-missle fired by F16. The missile destroyed their house which was of 2 floors resulted in killing 4 members including a child. 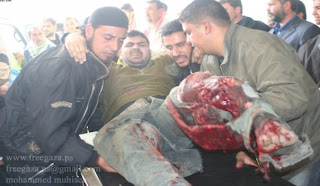 Around 30 air raids and 50 bombs and artillery shells fired towards the Palestinian civilians. The Jabalya camp which is the position of the military holocaust is densely populated. Around 1000 thousands live in about 1 killo meter. Thus a lot of innocent victims fall quickly.