"In Lebanon, the resistance ARE the people" Mustafa Badr al-Din 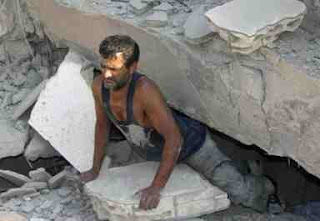 At the left, a man searches in the ruins of his home for his family members after an air raid in Southern Lebanon.

First of a series of reports of the People’s Tribunal for Lebanon (Bruxelles, February 2008) Mary Rizzo, http://www.peacepalestine.org/

Many were the testimonies that we 250 members of international civil society were able to hear. All of them brought something important that we need to share with those who were not present. I will present the various testimonies and participants’ interventions one by one. Today, I begin with a testimony by Dr. Mustafa Badr al-Din, Mayor of Nabatiya, a city in the south of Lebanon, 25 km from the “Blue Line”. This witness brought a flood of emotion to the public, not only for the content of his intervention, but for the amazing spirit he showed to us all. A physician, a man with a poetic way of communication, but most of all, a beacon for his people, Dr. Badr al-Din presented an important testimony, and the following day, in round table discussion, allowed us to understand more in depth the meaning behind what had happened to his people, his city and his land. His demeanour was one of extreme gentleness and wisdom. His words were both crushing denouncements of the evil men do to other men, but mostly, of the indomitable spirit of resistance that is inside all truly free people, free inside no matter what kind of prison or war their bodies are being held in against their will. They remain free and alive as long as we continue to carry the flame of their spirit and pass it along to others.

Nabatiya is the capital city of a region that numbers one million citizens. It is of great administrative importance to Lebanon, as well as being a community that is mixed in religion. “This is a holy occasion,” he said, opening his testimony, as he told us that his municipality alone sacrificed 250 martyrs whose only crime was being Lebanese. Not only that, “their law, Israeli law, had stopped the arrival to us of food and medicine. We asked ourselves, ‘What do they want from us?’ ‘For how long will they continue?’ It is my responsibility as a witness to testify, and I, in the name of my people ask the world community, ‘How long do we need to say at war? How many more wars will there be? Is the international community available to hear us and respond to what we have undergone and are still undergoing? Are the Europeans able to act against genocide in our country as they are able to denounce it and act elsewhere?’ Most importantly, since we know that this war will not be the last, we have to ask what Israel’s hidden agenda is.”

Dr. Badr al-Din, in his double task of mayor and physician, knows he has assumed a great responsibility on a personal level and by election: to care for his people on a physical and political level. “As a physician, I try to look at root causes. We have to think about why things have happened and to keep asking questions. As a mayor, I have to explain the reasons to my people, especially to the children. We know that one part of the world endorses or closes its eyes, and this is incomprehensible to our people. As a mayor, I have to help my people and I have to give them optimism.”

The emotions that his intervention brought to the public did not cease. “We can live in peace, the people of Lebanon are quite able to do that and it is our greatest desire. But, what is happening is bigger than us and those who are putting us in this situation are attempting to do something to us; they are trying to break a human link and try to prove us wrong. They want to develop a single-confession area, divide the Muslims from the Christians and divide all the branches of these faiths into factions that fight one another. This is not the solution to Lebanon. And, I say, we must state this so that the world is aware, and I beg people to at least listen to the children.”

Some of what happened in his city goes beyond actions of war, and is nothing if not cruelty. He told of the extensive bombing, in an area of Lebanon that is populated even more densely during the summer, as diaspora Lebanese return home to their families in the summer, longing to share the joy of reunification in their beautiful land. During this time, there was death upon death, and with the bombing of the nearby power plant, there was no electric current. It takes little to no imagination to figure out what the human consequences are for the survivors. Without electricity, there is no refrigeration, and the bodies must be buried as soon as possible, even without the survivors able to view their loved ones and for any kind of identification for those who did not have certain parameters to give them a burial with their names. Therefore, the survivors were denied the very basic right of seeing to a proper burial and normal processes of grievance.

“The killing of our people was not all they took from us. The Israelis conducted a secret war that is ongoing. They left to us their cluster bombs, in our houses and in our fields. We are denied return to our homes, our lands are now a battlefield long after the bombs have stopped dropping. Who is going to pay for that? This is what I ask the international community. Who is going to see to reparations for our refugees? The UN should take action and a dossier to the International Red Cross has been opened, but we are still waiting for any kind of reparations.”

He asked the worldwide conscience to take the responsibility upon themselves so that the suffering of the people of Lebanon is not in vain. When asked how the IRC reacted to the opening of a dossier, Dr. Badr al-Din, in his gentle manner, lowered his head, shook it and said slowly, “Officially, they did react. They came to see. It is important for people to see. But then it ended there. Yet, I say one thing, I do believe that if they came to see, and if others come to see, this will always be more important than piles and piles of papers.”

He went on to identify what exactly this war had attempted to bring about. “We did not establish which type of aggression that came to strike us. We were and are simply Lebanese civilians. The fact is that we are entitled to live there, even if it is too close to the border area the Israelis covet. The purpose of the enemy is to clearly identify the border area and to force people as far back away from it as possible. But we will not leave. This is our land, and we hold on despite everything. The Israelis also tried to adopt a system of division that failed them. They tried to create social shock between the local inhabitants and the fighters of Hezbollah. Yet, much to their surprise, but not to ours, this did not happen. The Israelis failed to realise that the resistance ARE the people. We are the same. The Israelis attempted to use the principle of “Divide and Rule”. They sought to create divergence between us and the Hezbollah. They tried to accuse the resistance of being responsible for our suffering and tried to undermine the popular support. In fact, with the bombings, many people did leave, because bombs are real and death and destruction were not in the imagination. People are afraid and rightly so. But what Israel tried to do did not work. They failed because in general, it is the people who resist.”

“The Lebanese know their struggle is a lifelong one. The Lebanese population is well aware of it. We remained together and we were victorious. We sacrificed many innocents and the children as well as the adults, but especially the children, are suffering traumas from this, and I know that they need support to relieve this great psychological burden.”

I ask all of us to keep asking the questions that Dr. Badr al-Din posed. And, I thank him for reminding us that it is the spirit of the people who resist that we have to honour. Lebanon was not divided, and that is a testimony to the will of the Lebanese people to resist the aggressor. The price was so high, and all the innocent blood spilt calls from the grave for justice.

see here for many photos.