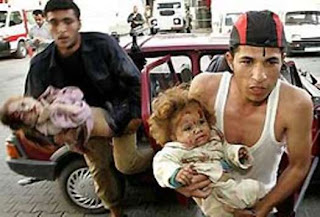 Heavy missiles, rockets, bombs, Apaches, F16 planes are being used against the innocent Palestinians.
Anna Goldman reports from Gaza Strip,
Gaza Strip, 1st, March 2008, (PCAS) - The last few hours witnessed a very dangerous stage in the Israeli war of Holocaust against Palestinians. On the early hours of today, Saturday, 27 children and freedom fighters have been killed by the new Nazis.

Vice Israeli defence (War) minister, Matan Vina, threatened of new Holocaust in the Gaza Strip. The call was quickly implemented on the ground as conveys of tanks invaded the northern-eastern area of Gaza Strip.

A Salya family which is comprised of 7 members was bombed by Nazis' Helicopter (American Apache) leaving 1 woman and 1 child dead. They were exposed to an air raid while having their breakfast!

About 27 freedom fighters and civilians have been killed by Israel - a father and his son, as well as two children - during an Israel Holocaust ground incursion in the northern Gaza Strip town of Jabaliya before dawn Saturday.

Two of the dead Palestinian children have been identified as Jacqueline Abu-Shbak, 12, and her brother Iyad Abu-Shbak.
Some names of victims are identified as the follows:

An Israeli air strike on the Al-Farta neighborhood of Beit Hanoun in the northern Gaza Strip on Friday afternoon left four Palestinians injured.

Muawiya Hassanain, the director of ambulance and emergency services in the Palestinian health ministry said that Beit Hanoun hospital received four people with shrapnel injuries caused by an Israeli missile.

This round of Israeli war against Palestinians came after Palestinian freedom fighters stopped firing some old home-made rockets. These rockets killed 1 Israeli only, while Israel retaliated and killed 57 persons!

In less than 3 days, the Israeli war of Holocaust killed 57 Palestinians and injured 250 most of them Children including 3 babies. The Israeli-Nazi holocaust comes in time of siege imposed in Gaza Strip.