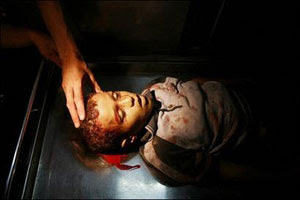 In June, 1942, in reprisal for the assassination of the Nazi commander Reinhard Heydrich, the Germans carried out a murderous rampage of murder and terror throughout Czechoslovakia. The small Czech village of Lidice bore the brunt of the German revenge, with the SS killing all the men, deported all women and children and razed the village to the ground.

Similarly, in March 1944, thirty-three German soldiers were killed when members of an Italian resistance group set off a bomb close to a column of German troops who were marching on via Rasella in Rome. Adolph Hitler got furious and ordered that within 24 hours, ten Italians were to be shot for each German soldier that had been killed. Herbert Kappler, the local German commander, quickly compiled a list of 320 civilians who were to be assassinated as vengeance. On March 24, the victims were transported to the Ardeatine caves where they were summarily executed by the SS.

Numerous other ‘pacification operations’ were carried out by the Nazi armies against civilians throughout Nazi-occupied Europe, in which men, women and children were brutally killed to avenge the death of German occupation soldiers by local resistance fighters.

Now what is the difference between these Nazi atrocities and what Israel, the “only democracy in the Middle East” is doing in the Gaza Strip, where “the most moral army in the world” is slaughtering babies as young as six-months’ old? I know that many Jews, especially Zionist Jews, have developed almost instinctive knee- jerk defensive reactions to any comparisons between Israel and Nazi Germany. However, the truth must be proclaimed aloud, irrespective of how many Zionists will get angry.

Israel claims that it doesn’t murder innocent civilians deliberately. But this is a big, obscene lie, of which even most Israelis are aware. Mistakes happen a few times, but when the wanton slaughter of children occurs each day and every day of the year, it means it is policy.

In addition, when the number of victims, especially innocent victims, as in Gaza, even intent itself becomes irrelevant.

In the final analysis, murdering knowingly is murdering deliberately, regardless of the prevarication and the verbal juggling.

Hence, Jews around the world, especially those who support Israel, should be willing to bring themselves to recognizing that what their wonderful state is doing to these helpless Palestinians is a virtual holocaust or at least a holocaust in the making.

How else can any honest person relate to these phantasmagoric images that keep coming from Gaza, haunting the conscience of every human being?

True, Israel had not introduced gas chambers in Beit Hanun and Khan Younis or Rafah. But we have F-16s raining down bombs and death on sleeping children and women and innocent civilians.

If Jews who support this satanic entity are not willing to call the spade a spade and recognize a holocaust as a holocaust, then they should be viewed as active accomplices in this wanton rampage of murder and terror.

This is not a war. Calling the current Israeli onslaught on Gaza a war is like fornicating with words. Wars occur between armies and states.
What is happening in Gaza is actually a merciless and brutal rampage of murder and terror waged by a Wehrmacht-like army against a blockaded, beleaguered and starved people who want to survive and be free, very much like Jews did under the Nazi occupation of Europe.

Indeed, when Israel murders a hundred Palestinian, mostly innocent civilians, for every Israeli killed, there is a name for that, it is massacre.

It is conscionable that honest people around the world, including many conscientious Jews who can’t bear watching the heinous crimes Israel is committing in their collective name, must call the spade a spade. A holocaust, after all, doesn’t become lesser when perpetrated by Jews. There is no such a thing as a kosher holocaust or kosher massacres.

Now, once again, human decency is being affronted and insulted by this reptile terrorist Matan Vilnai, Israel’s deputy defense minister, who has gone as far as threatening the thoroughly tormented Gazans with a holocaust.

Speaking to the Israeli army radio Friday morning, 29 February, Vilnai said “the more Qassam rockets fire intensifies and the rockets reach a longer range, the Palestinians will bring upon themselves a bigger holocaust because we will use all our power to defend ourselves.”

I think Jews should realize that this criminal state, with its manifestly intransigence and bellicosity, is forcing them to make a moral judgment. In the face of evil, and Israel is a clear embodiment of evil, one can’t be neutral. It is either one stands with evil or stands against it.

Today, people around the world, including millions of Jews, are watching the pornographic slaughter in Gaza live on their TV screens. And no amount of spin, lie, or hasbara will make the images of mutilated babies look innocuous.

Finally, the people of the world will not be duped by the propagandistic lies about so-called rocket attacks on Israeli towns, which are meant first and foremost to create an artificial equation between the wanton extermination of Gazans and the mainly psychological discomfort experienced by some Israeli citizens as a result of the fall of these nearly innocuous fire-crackers, fired by some desperate Gazans in order to deter Israel from killing more of their children.

This is because Israel knows very well how calm and peace can be restored for both the people of Gaza and Israelis across the border: Lift the criminal siege on Gaza, allow Gazans to access food and to travel, allow them to export and import, and stop these daily massacres. And then not a single Qassam will be fired onto Israel.