Oren Ben-Dor - Freedom of Speech, Free Speech and Their Enemies 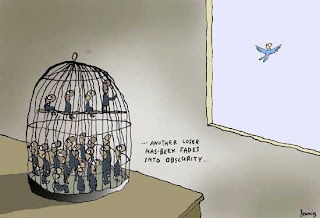 from Counterpunch
The Silencing of Gilad Atzmon
By OREN BEN-DOR
I have recently signed a petition that condemns the constant attempts to silence Gilad Atzmon. The same petition also objects to the constant attempts to discredit and hinder the website that hosts, among others, Gilad's views--Peacepalestine--one of the more enlightening internet platforms on Palestine.

It would be an understatement to say that debating Gilad's voice is supremely important. No thinking person could fail to be stimulated by the deep connections Gilad makes.

Dwelling together in the unsaid is what makes intellectuals' innermost togetherness but it does not mean that all those who respond to the unsaid can be assimilated into one another so as to form some kind of a "group".

All those who try to smother Gilad's endeavours, to distort his voice through vulgar associations and conventional clichés, and to utilise uncritically accepted conventional havens for thoughtlessness, do not really do justice to the intellectual game as far as Palestine is concerned. I believe this message to be the essence of this petition.

In Chronicle of a Death Foretold, Gabriel García Márquez narrates the story of a village in which everybody understands that a murder is about to be committed in the near future. Yet, nobody is doing anything about this forthcoming event that is chronicled to happen. Some deep causes combine to make everybody complicit in diverting, repressing, hindering, "forgetting", being "delayed", in short avoiding any possibility of stopping the chronicle from happening. This concealment thus becomes a part of that fate that eventually leads to the death of Santiago Nasar.

García Márquez may have given us a metaphor of how fate can unfold as possibilities that are always already grounded in denial of deep self-concealing past events. He also shows how the unfolding of this fate lurks amidst intensive highly-involved chatter.

Zionism may not merely be a cause of colonial injustice in Palestine in the sense of being a misguided response to anti-Jewish racism understood as "anti-semitism". Zionism can be conceived as a symptom the non-empathetic manifestations of which are historically and existentially continuing certain facets of Jewish being and thinking. It is very important to ask whether the originary aggression of victim mentality as well as the choseness-begotten separateness existentially links the Zionist and the Jewish question. This link may well pervade the mentality of Israelis whether orthodox or not.

The anti-Zionist struggle must not encage itself in too simplistic a link between the Jewish Question with the Zionist Question--a simplistic link that in fact craves to sever the deeper ontological connection that might persist between the two questions. Such a dominant, and far too quick, paradigm that by and large dominates the anti-Zionist struggle has been that Zionism's misuse of the Holocaust is somehow an aberration of Jewish thinking. Thus portrayed, Zionism can be successfully isolated and fought against by Jews as Jews.

It is this very denial of the existential link between the Jewish Question and the Zionist Question--a link that is suppressed by formulations such as "Jews Against Zionism" or, more broadly, by many attempts of "Jews" to become anti-Zionist - that needs to be questioned and destabilised.To be an anti-Zionist without due regard to that being and thinking that Zionism may so tragically continues, may well be to confuse symptom and cause, thus perpetuating that history that leaves the symptom--Zionism--intact. There is need to fathom the extent to which the slogan "Jews against Zionism" may be an oxymoron. Such an oxymoron may be at the heart of the denial, and protection bestowed upon the denial, of the oxymoronic nature of another notion, namely that of a "Jewish and democratic state".

It is the task of an intellectual to touch the untouchable and liberate thinking from its blackmailed, somewhere idle, comfort zones. I am firmly convinced that these vulgar attempts at silencing of Gilad and other courageous voices offends against supremely thoughtful, compassionate and egalitarian intellectual endeavours. This propaganda of silencing which is characterised by breeding conflict and heresy stalls a debate which is crucial for Palestine and for humanity. Intellectual reflections on actuality, historicity, causes of events--those primordial events that manifestations of violence, the Holocaust amongst them, respond to - are not to be decided by picketing, balloting and smearing.

That which needs to be brought into language by free speech is quite often that which is most difficult to say and to hear.In fact so difficult it might be that we might even venture to suggest that it is essentially impossible to respond in speech to what is. So, rather, it would be better to say that to speak is to respond to an always antecedent and mysterious call, thus essentially belatedly and distortingly--to respond to what needs to be attended to in speech. If speech is the captive of discourse, the captive of represented group identification, the captive of methodologies, the captive of a representative narrative of captive of amputating version of collective memory, the captive even in the notion of a thinking-subject, it is not yet active speech.The Saying of speech is irreducible to anything merely said and is always a response to a call by a yet always-antecedent Saying that has already called upon the speaker to respond.

We need free speech in order to understand what might be the deep origin of Zionism and in order to contemplate Zionism's so-successful use of the Holocaust "memory". By simplistically condemning any free speech about the mystery of the Holocaust as "anti-Semitic" or "holocaust denial" the silencers suck all energy from our thinking, thus playing into the hand of denials and vulnerabilities, thus helping to tranquilise the mind from connectedness to primordial events.

We must not legalise the thinking about the Holocaust. We must not turn thinking about it into a moral, legal or indeed factual reflection. The horrors and murderous violence against Jews may have been a response to events that had corrupted the relationship between humans and Being long ago. Grasped thus, the Holocaust may have been severely distorted by National Socialism; by those who are said to "deny" the Holocaust by some arguments about facts; by self-righteous Jews-against-Zionism; by Zionists. All these forms of forgetfulness of the Holocaust may well be on a common matrix of denial. Indeed this denial may constitute a chronicle of another Holocaust foretold.

My point is that the Holocaust's significance lies beyond the actions by the Nazis who actually perpetrated the violence and who justified these actions by turning this significance into a militarist object of an idea. The same claim can be made in relation Zionists and their Jewish opponents.

Thus, a simplistic anti-Zionist struggle - including such struggle's memorialisation of the Holocaust by fighting against the abuse of Holocaust memory by Zionists - may itself tragically become the most sophisticated form of Holocaust denial. It is not simply that Zionism denies the Holocaust. Those who fight Zionism may have already fallen into that very fateful chronicle that Zionism participates in.

Voltaire's words concerning the freedom of speech loom large. I urge all people with free speech as their guide to sign this petition and to help by that to respond to the actuality of the actual in Palestine, an actuality, again, which embraces all humanity and the denial of which might well have catastrophic implications for humanity.

I believe that only through holding of the mirror might there be a faint chance to find a connective tissue to that being and thinking of Israelis. Without holding this mirror the egalitarian struggle against Zionism may well remain in distance and deafness to the self-preserving violence in the Middle East and the World.

Oren Ben-Dor grew up in the State of Israel. He teaches political philosophy and the philosophy of law at the School of Law, University of Southampton, UK.His books Constitutional Limits and the Public Sphere (2000) and Thinking about Law: In Silence with Heidegger (2007) are published with Hart Publishing, Oxford. He can be reached at: okbendor@yahoo.com