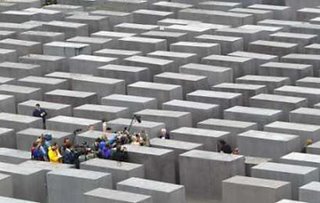 The United States hopes that the United Nations General Assembly will vote by the end of this week on a resolution that condemns "any denial of the Holocaust". (CNSNews.com)

"We respectfully urge your country to co-sponsor and support the Resolution on Holocaust Denial that is to be voted on in the General Assembly this Friday."
(from a letter to UN ambassadors, Glen S. Lewy, ADL National Chair and Abraham H. Foxman, ADL National Director 23 January, 2007)

The draft resolution proposed by the US "condemns without any reservation any denial of the Holocaust," yet, it doesn't single out any specific country for criticism. It doesn’t take a genius to realise that it is Iran’s Ahmadinejad who the Americans are after. Clearly, the new American initiative at the UN, which is aiming at transforming the world into a ‘Holocaust Denial Free Zone’ has very little to do with genuine truth-seeking or an authentic interest in historical research. The Americans are there to furnish us all with the futureless nightmare of hard capitalism. They mistakenly believe that they can do so as long they restrict our vision of the past. If to be honest, It isn’t really Abe Foxman and the ADL that the Bush Administration is caring for. And it should be evident that the American decision makers could not care less about the notion of history or the truth of European Judeocide. What’s it about, then? America wants oil and Ahmadinejad has plenty of it. Not wanting to stop there, America also has as its priority stopping Iran from joining the nuclear club that they themselves lead. Yet, It is rather amusing that America - with all its fleets, airplane carriers, cruise missiles, ultimate air power and nuclear might - needs the Holocaust to win what seems to be its next war.

I am not a Holocaust scholar nor am I a historian. My primary interest is not the story of Auschwitz nor the destruction of European Jewry. But I am very interested in Holocaust politics, in the range of discourses that employ Auschwitz. I happen to ask, how come America, once the leader of the ‘free world’, finds itself engaged in ‘global thought policing’?

It is clear beyond doubt that America foreign affairs needs a popularity injection boost. American ideological hegemony is in a state of total bankruptcy. Bush’s administration desperately craves for support within the European community. It is not a secret that Continental Europe, in itself a multi-ethnic community, doesn’t succumb in the same way to the Anglo-American notion of cultural clash. The Europeans so far have refused to join Blair and Bush’s war against Islam in a real, dynamic way. Yet, with the new holocaust denial resolution, America hopes to introduce a change of spirit. Rather than conveying the repeated false image of Judeo-Christian versus Islam, this time it is the ‘Holocaust’ versus its ‘Deniers’. Rather coincidently, the Holocaust conformists (us) need oil, the ‘deniers’ (them) happen to possess it.

As foolish as it may appear, America finds itself slipping into the trap wittily dug by Iranian President Ahmadinejad. The American administration has managed foolishly to approve that the Holocaust is indeed the demarcation line between East and West, between so-called ‘evil’ and ‘good’. Yet, the definition of this separation can be seen as that which stands between the ‘free thinking West’ that enthusiastically seals its past in a black box and the ‘open minded East’ who dare to raise questions about the past. The Holocaust resolution draws the future battlefield between the uprising of (yesterday’s) Slave and the decay of (today’s) Master. Ahmadinejad threw the bone, the Bush administration was stupid enough to pick it up. It affirmed that the Holocaust is the new medium of resistance.

Within the framework of the new American Holocaust resolution, it is ‘us’ - the West, those who ‘know’ the ‘truth’ and ‘them’ – nations who aren’t counted in that hegemonic group, who fail to see it. Yet it is ‘us’ who make our past into a graveyard and it is ‘them’ who grasp that it is the dynamic past that shapes the future.

Without getting myself into the debate regarding the truth of the Holocaust, the ugly face of Holocaust-politics cannot be hidden anymore. The Holocaust is now officially becoming an ideological weapon against Islam and also against Arab resistance. It is there to establish a fake western collective identity based on blind conformity and total marginalisation of the other.

However, in the short term, the new American Holocaust political initiative may prove to be productive. The notion of the destruction of `European Jewry’ unites some major political powers. It unites the European parliamentary left together with the conservative liberals as well as America’s most radical expansionist forces. They all need the Holocaust for different reasons. In Europe the Holocaust is there to dismantle the emerging far right, In the Germanic States the Holocaust is the core of the post-war symbolic order. For the Anglo-Americans the Holocaust is there to push away any real ethical engagement with Dresden, Hiroshima, Vietnam, Palestine and Iraq. Most importantly, the new Holocaust denial resolution provides the Americans with the pretext for the next Genocide. In other words, the next Holocaust is actually a collective punishment of Holocaust denial.

Regardless of what the truth of the Holocaust is and what its denial may entail, to seal the past is to give away the vision of a better future. The end of history is the end of the West. Bush’s America may just want to take us there. With the death toll in Iraq numbering 650,000 and 3,000,000 displaced refugees, with millions of Palestinians locked in concentration camps for almost 40 years, neither Bush nor Blair nor any other Western politician can offer us a cheerful vision of the days to come. Instead they encourage us to stop looking into our past.