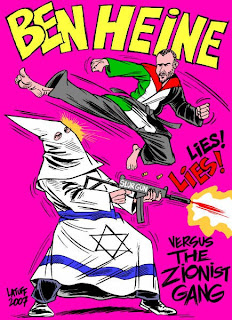 Artwork by Carlos Latuff
It is a fact that people feel uncomfortable when they are faced with juxtapositions that they do not understand. When they are provided with input that is not familiar to them, their brains are unable to create the proper nexus to establish a clear idea of what the message they are seeing is communicating.

Political cartoons sit at the pinnacle of juxtaposition. They refer in a graphic way to events, characters, narratives and situations that otherwise might need hundreds of words to communicate. The user of a political cartoon has to in some way be “inducted” into the images that are being manipulated and presented in a new way. This requires two things: talent and creativity of the artist to pull the most appropriate image out of the Pandora’s Box of the visual imagination, and the capacity to render the message it carries in a meaningful way. Yet, it requires something from the user as well: he or she has to be able to establish those connections that give sense to what is depicted. A certain level of awareness is absolutely required in order to be able to come up with the emotion that the cartoon is there to stimulate, be it shock, humour, irony, surprise, complicity, compassion. There is a relationship between the artist and the user that is necessary, a kind of unspoken understanding. There is the assumption that we are all taking off from the same point.

In fact, it would be useless to put a political cartoon that sincerely praises Bush’s invasion of Iraq on the pages of a radical leftwing magazine, for example. The unspoken pact between the artist and the user is non-existent. It is as if Cinderella’s horse-drawn carriage was pulling up to the Olympic Stadium on the night of the Champion’s cup final rather than to some castle in a make-believe kingdom. It is not really just absurd, it is simply inappropriate and unacceptable. The political cartoonist creates the work that his inspiration brings from his hands, and its placement is a matter that is of secondary concern, even though this very element is of vital importance.

Everyone wants to believe that they are doing “the right thing” and especially for a political blog or forum, “the right thing” often seems to be avoiding subjects that require a modicum of analytical thought that is out of the box, which would risk causing people to misunderstand the point that is being made. One would assume that a progressive blog or site would draw certain conclusions about human rights violations, and in the case that we are about to illustrate, in its very approach to the issue of Palestinian rights and Israeli politics. One might hope to deduce that following the rain of atrocities that Israel has brought down against Palestinians and Lebanese in recent months alone, a more critical view of Israel can finally enter into even mainstream progressive political sites.

Ben Heine, together with Steve, the blogger of the outstanding and courageous site Desert Peace, were invited to contribute to a major American political site, Daily Kos. Ben posted a very fine piece by a Palestinian writer that discussed some background on Zionism and even mentioned the importance of mutual respect. There was nothing inflammatory about the content. Together with this piece, he submitted some of his own art, including an illustration of Avigdor Lieberman who was juxtaposed to Hitler. It is indeed an extremely effective image, and one that makes perfect sense to those who are familiar with the calls for ethnic cleansing that Lieberman makes on a regular basis to his Israeli constituency, and which is left largely without any criticism even by the progressive readers of a site like Daily Kos.

Well, as Steve informed many of us who are very familiar with Ben’s work, and less familiar with Daily Kos, his intervention was labelled as anti-Semitic, the post was deleted from the site for “violation of copyright” and what is worse, the mob mentality of the readers of DK were unable or unwilling to be able to interpret the juxtapositions of the political cartoon. This would be acceptable for a blog that does not deal with politics or current events, but for the “informed” readers of DK, only a few out of the hundreds of verbally aggressive people who left comments attacking Ben were able to understand that Zionism is indeed problematic, and that calls for ethnic cleansing, transfer and oppression of Palestinians are unacceptable, and they are part and parcel of Zionism and of the formation and modus operandi of Israel.

We at Tlaxcala are engaged in translating articles from hundreds of authors and sources into languages that are different from the language they were written in, so as to render them accessible to a vast global public in an almost immediate manner, as soon as the articles themselves are being diffused through the media. We select texts that reflect our views on what we consider the major issues of the day, established in the fundamental belief that justice, peace, freedom from oppression and human and environmental rights are the matters that concern all humanity. We found a valuable resource in Ben Heine because his work transcends language, and his vision is a graphic representation of the work that the authors, translators, poets and journalists are providing. The harmony between the work of Tlaxcala and the work of Ben Heine is almost palpable. His insightfulness into the very core of the meaning of the news that affects all of us is almost mystifying. How many times has he made an image available to us that we could not devise in any other way, given the complexity of the message and the need to put it into a simple context that invites the reader to reflect even more deeply? And how many times again has he been able to read a text and find the most affective visual reference for it? Ben supplies not only Tlaxcala, but many other sites with his work, his inimitable style and his solid and sincere humanity.

The sad fact that his work was so grossly misunderstood and misinterpreted by “progressive” readers does speak volumes about how progressive people do obtain their information, and about how capable they are of establishing the necessary mental connections to make these cartoons meaningful, to interpret them correctly. We have no doubt that incidents like this are both a result of sloppy and careless journalism and a cause of it. If the quality of the political sites sinks deeper into pre-packaged consumer commodities, without reflection, without healthy provocation and without a certain erudition and research, there will be no way out of the confusion that reigns supreme in the general public and in progressive circles as well.

This is one of the reasons Tlaxcala was created, to help spread the message of humanity and decency and concern for the oppressed, to expose those who oppress them and to inform people of the crimes taking place under the cover of “business as usual” so that real change could happen. Change happens, actually. It happens one person at a time, one by one coming to awareness and being able to speak out loud and to protest against the injustice that dominates so many aspects of life on our planet. So convinced are we of this, that we seek to use all the communication tools that we have, breaking down linguistic barriers even by means of effective art. In this, Ben Heine, despite his young age, has few rivals. We are proud of him, stand fully behind his work and are firmly convinced that his visions and efforts are contributing to the understanding between peoples, transcending all limits of nationality, race, language, religion or beliefs.

The 71 members of the Tlaxcala collective