Patrick Seale - Israel is determined to dig its own grave 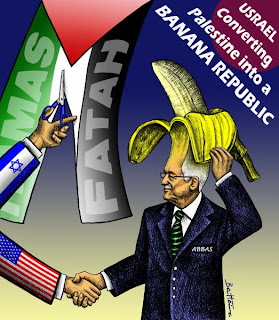 Cartoon by Ben Heine
Special to Gulf News
Gulf News - Published: June 22, 2007
What would it take to persuade Israel to rethink its attitude towards its Arab neighbours - and primarily towards the Palestinians? The Hamas victory in Gaza is surely a clear signal that an Israeli change of direction is urgently needed.

All efforts of Israel to break the democratically-elected Hamas government have failed. Its policies of boycott, siege and starvation, of bombing and shelling, of extra-judicial murder, of withholding tax revenues, of the systematic destruction of Palestinian institutions have served only to create a time-bomb of hunger, despair and defiance on Israel's flank.

Yet Israel appears to have learned nothing. Instead of seeking peace with the Arabs - instead of seizing their outstretched hand - it persists in rejecting all peace overtures, preferring to rely on force and still more force, and on its ability to manipulate its American ally.

In Washington this week, Israel's Prime Minister Ehud Olmert managed to abort a tentative American initiative to restart Israeli-Palestinian negotiations. He persuaded George W. Bush - a president painfully out of his depth in Middle East politics - that this was not the time for peace talks with either the Palestinians or the Syrians.

The appointment of Ehud Barak as the new defence minister of Israel is another ominous sign that wars rather than peace talks lie ahead.

Condoleezza Rice, the unfortunate US Secretary of State whom some had thought was planning a new push for Arab-Israeli talks, has clearly been outgunned by pro-Israeli hawks, such as Elliott Abrams at the National Security Council.

The word from Washington is that combating "terror"remains the US-Israeli priority. President Mahmoud Abbas has been instructed to join the war against his Palestinian brothers, if he is to earn a few crumbs from the rich man's table.

To most independent observers it seems plain that Israel's aggressive and expansionist policies have resulted in a steady deterioration in its strategic environment.

It has acquired, or rather created, enemies on several fronts - Hezbollah in Lebanon, Hamas in Gaza, large numbers of dispossessed, brutalised and radicalised Palestinians, Syria, Iran and radical groups such as Al Qaida.

Some other trends should cause Israeli alarm bells to ring. Educated European opinion is increasingly outraged by Israel's behaviour; meanwhile the Arabs are getting better educated, better armed and richer than ever before; and soaring Arab demographics are producing tens of thousands of potential recruits for the asymmetric wars which Israel is ill-prepared to fight but which seem to be the pattern of the future. If this were not enough, the trend to which Israel should perhaps pay the greatest attention is that its main ally, the US, is bogged down in an unwinnable war, waged in large part because Israel's American friends, the Washington neoconservatives, thought that if America smashed Iraq, Israel would no longer have anything to fear from the east.

It could then continue its West Bank land-grab and its destruction of Palestinian society without risking any serious Arab reaction.

So, is Israel rethinking its strategies? There is no sign of it. It refuses to see that the regional balance of power may be changing. It continues to believe that it can uproot Hezbollah in Lebanon and Hamas in Gaza, and defeat Syria and Iran - or get the US to do the job on its behalf.

To avoid peace talks which might involve ceding territory, it continues to depict Hamas as a "terrorist organisation" bent on Israel's destruction, thereby resorting to the well-worn trick of saying, "How can you negotiate with someone who wants to kill you?" Is Hamas, in fact, a terrorist organisation or is it a legitimate resistance movement to occupation and oppression? The Americans have swallowed the terrorist line and so has the timid and cowardly European Union, although several of its members now regret it.

Hamas is now busy restoring law and order in Gaza. It is disarming the gangs which lived on extortion and blackmail (such as the Doghmush gang which is holding the BBC correspondent Alan Johnston). And it is seeing to the immediate needs of the sorely-tried population of 1.4 million, densely-packed in a small territory which Israel has turned into the world's largest outdoor prison.

This is what Esmail Haniya, the Hamas leader and now the effective ruler of Gaza, told the French newspaper Le Figaro recently:

"Our programme is clear. We seek the creation of a Palestinian state within the frontiers of 1967: that is to say in Gaza and the West Bank, with East Jerusalem as its capital. The PLO remains in charge of negotiations on this point. We undertake to respect all past agreements signed by the Palestinian Authority. We would like to see the introduction of a reciprocal, global and simultaneous truce with Israel." Would that Olmert or any of his colleagues said anything as sensible! Instead, Israel is planning to continue, even to intensify, its policy of sealing off the Gaza Strip.

Tzipi Livni, Israel's foreign minister recently urged the ministers to continue to isolate Hamas while easing the pressure on Fatah by ending the 15-month financial boycott of the West Bank. But will this be enough to save Abbas? Can a policy of feeding the West Bank while starving Gaza succeed?

It does not seem likely. Israel's security establishment will not agree to remove the hundreds of road blocks which make Palestinian life a misery. Israel's powerful colonists' movement will not agree to freeze the colonies, let alone remove them. And Israel's political leaders will move heaven and earth to avoid negotiating peace with the Arabs on the basis of the 1967 borders.

As a result, Abbas will move into ever greater illegality and will be seen more and more as a quisling; Fatah will continue its terminal decline; and Israel and its neighbours will be doomed to decades more of violence and war.

As an astute observer remarked to me this week, "The Middle East today is like Europe on the eve of the Great War of 1914-18. It needs only a spark to set the whole region on fire."

Patrick Seale is a commentator and author of several books on Middle East affairs.