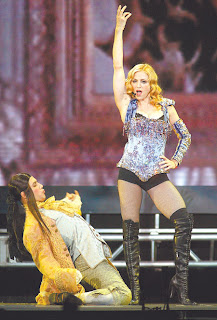 Put before the thought of Al Gore organising a mega-rock-concert in order to save the Earth, “Live Earth”, as it is called, the first reaction is to knock on wood. This at least is the reaction of those who maintain a small amount of historical memory. Few initiatives in history have brought about more misfortune than the incredibly famous Live Aid of 1985, in favour of an Ethiopia that was decimated by famine. The planetary super-concert was an amazing success, beyond any expectation, the most viewed spectacle of all time. It collected 245 million dollars for the Ethiopian people, compared to the previsions of three, or at the most, four million. But half of the money ended up in the off-shore accounts of the dictator Menghistu and the other half went to armaments that were used by Ethiopia to set about on a cycle of wars that are still underway, with a final balance of deaths that far outnumbers those from natural disasters.

The true help of Live Aid went to the record companies and the connected industries, who were able to make their way out of the crisis of the early 80s. One can today understand the enthusiastic adhesion of the rockstars and the record companies, who are now dealing with another serious sales crisis, when they received the appeal of the “ex future president of the United States.”

At the risk of sounding brutal, it’s important to speak clearly. There does exist an industry of indignation that is not less polluting, at least upon democratic life, of some gigantic multinationals. It is one thing to make information or act with politics, it’s another thing entirely to set up concerts, spectacles, shows, make books of films that have expensive author’s rights, with the alibi of the “good cause”. It is not only about an ethical question. The point is that with political action, one solicits people to mobilise themselves in order to resolve the problem. With commercial spectacularisation, one transforms citizens into passive spectators who have however been furnished with a false conscience.

The spectator who has paid the price of a ticket or obolus to charity, is convinced that he is participating in some way to a battle, while he does nothing else but chose to buy a commercial product. Selling vegetables at the farmers’ market is far more honest than selling good causes and do-good feelings.

In the years that followed Live Aid, there was a sudden rise in attention by the media for the tragedies of Africa. Then, seeing that the situation was not improving, but actually, that it was dramatically worsening, the bad news from Africa started to slide back down to the last pages and in the very last items in televised news broadcasts, until, as they are today, they have all but disappeared completely. It’s not only the fault of “bad journalists”, but it’s also because the public simply does not care any more. The widespread reaction was profound disappointment, at first burning, then bored: “Well, those people… after all we’ve done for them…” The question is not that nothing was done, but, all that was done was a bit of showbiz.

Translated from Italian by Mary Rizzo, member of Tlaxcala, network of translators for linguistic diversity.