Jewish groups want to "Stop the Genocide in Darfur", too bad Israel kicks the refugees out 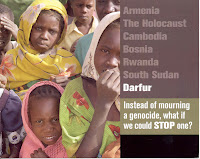 If you look up on a Google Search Save Darfur, you will find the major campaigns are "faith-based", as the sanitised lingo goes. Scratch beneath the surface, and it's pretty much "a Jewish thing". I won't argue with Jews wanting to act against genocide, but if you look at this flyer, (by a Jewish group for Darfur) you will see that they don't tend to consider the Palestinian ethnic cleansing and collective punishment based on a racial criterion as "genocide". Hm. Wonder why the double standards or the blindness.

Well, what happened yesterday in Israel, where some Darfur Refugees took refuge? Israel was sending them packing or putting them behind bars. It's one thing to TALK like a humanitarian enterprise, and another thing entirely to BE one. The Ministry of Foreign Affairs is trying to cover up the extremely bad press they are getting, and yes, even if you are a refugee, they are worried about the threat you pose as a security risk, thus:

"...At the same time, we must remember that these asylum-seekers come to Israel from a country with which Israel has no diplomatic relations, a country where there is a significant presence of Al Qa'eda operatives.

Therefore, we must examine each and every one of them and make sure that they do not pose a security threat. Once this is established, Israel is willing to take part in finding a multilateral solution to the problem. Israel cannot be the sole solution to the question of Sudanese asylum-seekers.

We are working together with international organizations and other countries in an attempt to find a longer-term solution and have established an inter-ministerial committee to look into the matter. We call on our friends in the international community to join forces with Israel in providing a solution. Of the 46 infiltrators returned to Egypt on 19 August, 42 were Sudanese nationals, 3 citizens of the Ivory Coast and one a Somali national. They were returned, in accordance with the Olmert-Mubarak agreement, under the supervision of the UN Refugee Agency, and on condition they would not be returned to Sudan."

From The Independent:
Plight of the refugees locked out of the 'promised land'
By Donald Macintyre in Khetziot Prison, Negev Desert
Published: 22 August 2007

When Joseph, a Christian member of the Dinka tribe was 12, he saw his mother killed and his sister raped and shot dead in front of him by pro-Sudanese government militia, who attacked his village in southern Sudan. He himself, he says, was abducted and sold to a businessman in western Sudan - as part of a policy of slavery encouraged by Khartoum as a means of curbing the rebel Sudan People's Liberation Movement. He says he was underfed, regularly beaten, addressed only as "slave" and that his owner tried forcibly to convert him to Islam. After an anti-slavery organisation bought his freedom after two years and took him to Khartoum, he came under the security services' scrutiny for helping forced converts to revert to Christianity. Having fled to Cairo but then arrested and imprisoned twice for SPLM activity he says, in September 2005, he had a fingernail removed and his arms and back burned - and his life threatened - by Egyptian interrogators acting under Sudanese security service supervision.

It's hardly surprising, therefore, that Joseph was highly relieved to cross the border from Egypt into Israel last summer, into the hands of friendly soldiers and police who ensured he had a medical check-up before bringing him to this remote desert jail close to the Egyptian border. Or that he should now be highly alarmed at the prospect of being deported back to Egypt. Joseph, a brave man, has given us his real name, but we have disguised it in deference to the strong wishes of the UN High Commissioner for Refugees which fears for the safety of people like him if they are deported back to Egypt. As it is, he has no doubt about the fate that awaits him in Egypt or Sudan if he is deported from Israel, as under current government policy he may well be. "If they send me back to Egypt I am dead," he said. "They are looking for me."

Joseph is one of around 1,400 Sudanese refugees whose future has prompted growing heart-searching in a country where the ghosts of the Holocaust are inevitably awakened by reports of a 21st-century genocide. Fifty Africans were forcibly sent back across the border to Egypt on Saturday night after arriving in the country earlier in the day. A majority, according to military sources quoted in Haaretz, were from Darfur.

The Association of Civil Rights in Israel strongly condemned the government's decision to deport "African refugees and asylum-seekers ... without following the international recognised procedures for determining whether they are refugees". The government insists it has assurances about the safety of the refugees from President Hosni Mubarak but faith in this was shaken by an Israeli soldier who described on TV seeing Egyptian troops shooting dead four Sudanese refugees trying to escape across the border into Israel at the end of last month.

Ironically, the misfortune of Joseph, who is no longer detained and worked for a spell in a hotel in the coastal Red Sea resort of Eilat, is in one sense that he is not from Darfur. For while saying that it will send back all Africans - including Darfuris - who cross the border illegally from now on whatever their status, it has pledged to absorb the 500 from Darfur who were already in the country. But even that pledge has not been extended to the other Sudanese refugees.

Joseph points out that there has been a fresh spate of killings by government-backed militias in southern Sudan - where the two-year-old peace agreement remains deeply unstable - and adds: "Everyone talks about Darfur but not about the south of Sudan," he says. "But we were the first to be in this war between Muslims and Christians. They are calling it a holy war and say they will go to heaven if they kill us."

Israel's proximity to Sudan's northern neighbour cannot disguise the fact that other Western countries have shown marked resistance to African asylum-seekers. But Israel's own history has inevitably lent an especial resonance to the debate. Professor Yehuda Bauer, one of the country's foremost Holocaust scholars, is scornful of Egyptian assurances and has no doubt that Israel has a duty to absorb all the Sudanese refugees. He strongly agrees that the southern Sudanese are also fleeing genocide and adds: "The numbers are not large and there are 100,000 illegal immigrants from places like Thailand and Romania in Tel Aviv. Recalling periods of rejection of Jewish refugees from Nazism by other European countries, including Britain, he says: "We are shooting ourselves in the foot by doing what others did to us in the past."

Here in Khetziot, where 120 women and children are kept apart from their men, prison warders have made every effort to make the refugees as comfortable as possible in their four-bunk huts. With good health care, the refugees are clearly healthy and relatively relaxed after their previous lives. Prison education staff are trying to work out how to implement a directive that the children need to go to school as long as they are here. But it is still a jail. "I like it in Israel," says Agnes Sampson, 20, another Christian from south Sudan. "But not here. I want to work."Mark Regev, spokesman of the Foreign Ministry, says that it is precisely because of the sensitivities of Israel's own history that it has decided to absorb the 500 Darfuri refugees who are fleeing what is internationally accepted as genocide in Darfur. But defending the decision to send back new refugees after a big increase in the past few weeks, he adds: "Israel is a small country, and it can't be the only answer. We call on other countries to play their part and we are ready to work internationally to help find a solution.