Saban, The Power Ranger and the Israel Lobby 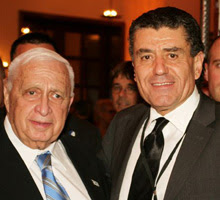 Major Campaign fund contributor to the US presidential elections, Haim Saban expresses his deep paranoia and deep far right leanings in this (old) interview that I've just seen now. More good reasons to boycott the Saban Galaxy of Products from this self-made man with a High School Diploma. I think we can live without Digimon, DragonBall, Power Rangers, Sweet Valley High, Candy Candy and other such "charming" entertainment products and their offshoots in marketing.

In recent years, the ability of the colorful Israeli-American billionaire to bring together Ariel Sharon and Bill Clinton, Shimon Peres and Henry Kissinger, Tzipi Livni and Condoleezza Rice has become one of the achievements of which he is proud. During the two years in which his personal fortune grew from $2.2 billion to $2.8 billion (according to Forbes), Saban succeeded in adding to the list of power centers he controls this prestigious annual gathering of senior Israeli and American figures for a joint dialogue....

Haim Saban was born in Alexandria in 1944 and immigrated to Israel in 1956. He moved to Paris in 1975, after almost going bankrupt. He arrived in Los Angeles in 1983 and achieved his first billion in 1995. Within a very short time - slightly more than a decade - he became a media tycoon, the major funder of the Democratic Party and a close friend of the President of the United States. A kind of Great Gatsby. Our Great Gatsby.

Haim Saban, after the second Lebanon War many Israelis are worried about their country's future. Do you share that concern?

"Israel does not worry me. Israel's neighbors worry me. I used to be a real leftist. I remember Arik Sharon coming here, to my house, a few months before Camp David, when he was still leader of the opposition. He told me there would be no deal because Arafat would not sign. I told myself that there was nothing to be done - these right-wingers were simply insane. I had no doubt that there would be a deal and the problems would be resolved. History proved that Sharon was right and I was wrong. In matters relating to security, that moved me to the right. Very far to the right."...

You meet frequently and quite intimately with Israeli and American decision-makers. What do you tell than about the situation regarding Iran?

"The Iranians are serious. They mean business. Ahmadinejad is not a madman. And every Jew who feels himself to be a Jew lives under the shadow of the Holocaust. That is something that does not leave us. The Holocaust never leaves us. So we are treating Ahmadinejad's declarations like those of Hitler in the 1930s."

"Yes, of course. When I see Ahmadinejad, I see Hitler. They speak the same language..."

The problem has an answer. I don't know. We had a tiny problem of Katyushas, and that paralyzed half a country. But maybe we have an answer for the big problems and not the small ones. Maybe we will succeed with the nuclear issue where we failed with the Katyushas. But if there is an answer, then I say yes, certainly. I would try other things first, but if they don't work - then attack."

"Is there a higher price than two nuclear bombs on Israel? So they will fire missiles, all right then. Iran is not Lebanon, where you pinpoint specific targets: this bridge here, that building, half of that courtyard over there. In Iran you go in and wipe out their infrastructure completely. Plunge them into darkness. Cut off their water...." ...

You said once that you are a one-note person, and that note is Israel. Why?

"More than love. Passion. A love that is passion."

"When we approach Israel I always ask the pilots of my plane to let me sit in the chair between them. We don't play 'Heveinu Shalom Aleichem,' but when I see the coast coming up my heart starts to go boom, boom, boom....."

You are reputed to have a soft spot for combat soldiers.

"I can't handle combat soldiers: whenever I have any interaction with them, I cry. Really. I swear. I was in the north two months ago and Gal Hirsch [division commander during the war in the north who resigned shortly afterward] did a tour with us. In my estimation what was done to him was absolutely unjust. I don't know if he made a mistake, but even if he did you don't take a person like that and throw him in the garbage. He has been in uniform since he was 14, the kid. He gave his whole life to our army. He's top-notch. Believe me, he's top-notch.

"So when he spoke to us and explained what happened in the abduction [of two soldiers by Hezbollah] and what happened in the war, I looked at him and cried. I, as an Israeli, would not exist if not for people like that. I strut around like a peacock in America and say I am an Israeli-American. What you hear: an Israeli-American. If not for people like Gal Hirsch I would be in a different situation altogether. I am telling you this in a totally egoistic way. Pulling no punches."