What Israel Wants, Israel Gets 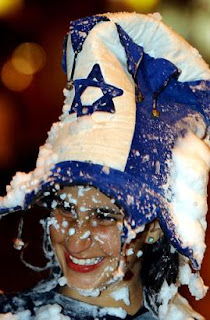 There is a consistent thread, a pattern, which designs Israel’s policies in the Palestinian territories. Any scrutinizing observer will notice how Israel first pitches an idea to the public – however preposterous – then allows the Palestinians and the international community to absorb it before putting it into action. This way, policies and measures are less shocking and seem more acceptable once the dust has been allowed to settle. We have all seen it time and time again.

When the Aqsa Intifada first broke out, there was no Qalandia or Huwwara checkpoint and there was no separation wall. Jerusalem, although technically closed off to the West Bank by ineffective and extremely liquid checkpoints, was more or less accessible to most Palestinians. Not that the situation was ideal for the Palestinians because if this were the case, there would never have been an Intifada. Still, there is a world of difference between the situation prior to September 29, 2000 and the present, this new reality creeping up on us like slow-growing cancer. Today, the tumor has grown to exponential proportions and will be extremely difficult to excise.

Early on, in March 2001, then-Israeli Prime Minister Ariel Sharon proposed a 100-day plan for quelling the Palestinian uprising, which included a labyrinth of checkpoints throughout the West Bank, curfews, military operations and the isolation of the Gaza Strip. A crude makeshift checkpoint at Qalandiya went up almost immediately, foreshadowing the ominous structure that was to come.

That checkpoint is a mere shadow of what it is today, with its elaborate terminals, holding rooms, turnstiles and Israeli soldiers. Qalandiya has become a landmark, one that is no longer even called a checkpoint – it is now a “border crossing” between the West Bank and Jerusalem. There are similar checkpoints throughout the West Bank, in all totaling over 500. Israel, with its baby steps and smokescreen pretexts, yet again succeeded in creating major facts on the ground.

The same can be said for the separation wall, which is now a hideously permanent fixture in the Palestinian territories. The Palestinians and later, much of the international community were up in arms at the racist idea of a separation wall. It was not that long ago when the world brought down the last wall built for similar purposes. Who would have fathomed that the Berlin Wall would be torn down only to rise from its ashes here in Palestine?

Protests ensued, both on the ground and in international tribunals. The International Court of Justice in The Hague even issued an advisory opinion deeming the wall illegal and recommending that it be dismantled. Today, not only has it remained, the Israeli government has changed its course in a way that, when completed, it would have cut into 40 percent of West Bank land. In the end, the wall, ostensibly constructed for Israel’s “security” against potential Palestinian suicide bombers, serves as a de facto border between Israel and the West Bank and will certainly be instrumental in designating any permanent borders in a final settlement with the Palestinians.

Then of course, there is the heart of the conflict, Jerusalem. For the Palestinians, no other spot on this earth can invoke such passionate emotions, or such fierce loyalty and patriotism than this holy city. Unfortunately, Israel insists it has the “holier” claim to Jerusalem and will in no way relinquish control over it.

According to agreements signed between Israel and the PLO, neither side – in this case Israel – should take any unilateral steps in Jerusalem that might compromise final status negotiations once that time comes. Yet again, Israel is way ahead of the game, taking baby steps before going in for the kill.

It is no secret that Israel is not interested in dividing Jerusalem or allowing the Palestinians to claim any part of it as their future capital. However, east Jerusalem remains occupied territory and Israel’s unilateral annexation of it has yet to be officially recognized by the world community. In order for any agreement to be a win-win situation for Israel, over the years it has taken unilateral steps in the city – settlement expansion and constructing the wall around Jerusalem – to ensure that Jerusalem remains in its hands in any final settlement, even if some areas – unimportant to Israel – are returned to the Palestinians.

Hence, according to this logic, it is no coincidence that just days before US Secretary of State Condeleezza Rice arrives in the area and a mere month before the long-awaited Washington peace summit, Israel announced the confiscation of 1,100 dunams of land from east Jerusalem villages. The land was supposedly confiscated to construct a road connecting Jerusalem to Jericho for the Palestinians. However, the real intention of the confiscation is to grab more Palestinian land in Jerusalem to build even more houses in the already mammoth settlement of Ma’aleh Adumim. Lo and behold, more unilateral facts on the ground.

This is all part of the so-called E1 plan for Jerusalem, which is designed to expand this settlement bloc and cut off Jerusalem completely from the northern West Bank. When the plan was first announced in 2004, Israel came against resistance from the United States and the plan was temporarily scratched. However, Israeli officials now maintain the new Jerusalem-Jericho road would create contiguity between Palestinian areas in Jerusalem and the West Bank, thus nullifying the former claim that it would sever the capital from the West Bank. Even if this were true in the strictest of technical senses, the fact remains that Israel is continuing its plan to expand the Jewish areas of Jerusalem while pushing out as many Palestinians as possible. Jewish settlements on occupied Palestinian land are deemed illegitimate by international law, partially because they are built on illegally expropriated Palestinian land.

Still, Israel has succeeded in turning these settlements into a bargaining chip for final negotiations. The Ma’aleh Adumim settlement is the largest settlement bloc in the territories and one which Israel has made clear it will not relinquish in any final settlement. Now, not only has Ma’aleh Adumim been made a permanent dot on the map, there are plans to expand this already monstrous colony by 3,500 housing units and an industrial park.

So, let us debunk some of Israel’s most common arguments. The 100-day plan to quell “Palestinian violence” has turned into years, the separation wall constructed for “security purposes” has become a de facto border and in Jerusalem, there are more unilateral and expansionist measures than in any other area of Palestine. Perhaps when the parties involved in peace efforts begin to look at the conflict in this light, the demand for an end to the Israeli occupation over all occupied Palestinian territory will present itself as the only solution.

Joharah Baker is a Writer for the Media and Information Programme at the Palestinian Initiative for the Promotion of Global Dialogue and Democracy (MIFTAH). She can be contacted at mip@miftah.org . http://www.miftah.org/Display.cfm?DocId=15045&CategoryID=3