And Blair’s Plan Comes to Palestine 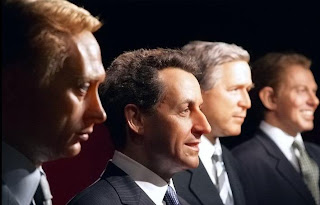 Michele Giorgio reporting from Jerusalem (from il manifesto, 18/12/07)
Blair played the role of protagonist also in Paris. The Quartet’s envoy for the Middle East and former British Premier takes seriously the duty of “developing the Palestinian economy”, as he has been entrusted by the American President George W. Bush, his companion in many military adventures. He takes his task so seriously that he’s churning out plans one after another. As many as four are the proposals the Quartet’s envoy has recently put forward for the “Rebirth of the Palestinian economy”, amongst which one with a striking name: “Corridor for Peace and Prosperity”.

It’s been ready for some time now, because it was already conceived by the Japanese International Cooperation Agency (JICA). It foresees the development of a large agro-industrial area in the Jordan Valley, the most fertile zone in the Palestinian Territories occupied by Israel 40 years ago. Behind the good-intention rhetoric, the project reveals not only the aim to make the dependence of the Palestinian economy on the Israeli one official, but also the intention of indirectly legalising the Israeli settlements in that portion of Palestinian territory.

Also included in the “Corridor for Peace and Prosperity” are plans for waste management about which some criticism has already come from the people of Jericho. As a matter of fact, the dumping grounds are expected to be built only in the tiny A-area, the one which, according to the outdated Oslo Accords, is controlled (at least formally) by the PNA.

Actually, the plan doesn’t take into consideration building dumping areas in the C-Area, which includes most of the occupied West Bank and is under the full authority of the Israeli army. Evidently, the Japanese and Blair seem to take for granted that, in the future, the C-Area will remain under Israel’s control. Jamal Jumaa, a leading representative of the Palestinian civil society and activist for the “Stop the Wall” campaign, suspects that the plan includes “also managing waste from the Israeli settlements built in that area, for instance the massive Ma’ale Adumim, which by international law, are illegal.”

In contrast with the socio-economical pattern of the Jericho area, comprised of farmers who work their small plot of land, the development plan which has been conceived by the Japanese and approved by Blair, foresees the set up of big agro-industrial enterprises with a remarkable workforce. If one takes into account the indigence in which most of the inhabitants of the Jordan Valley live, it won’t be too hard to guess that it will be the Israelis and the same old Palestinian elite who will dominate the entrepreneurial scene whilst the peasants will be employed as unskilled workers.

In the JICA plan, at pages 8 and 9, reference is made to the primary role for the development of the agro-industrial area that is expected to be carried out by “Israeli migrant firms”, an expression behind which are concealed those Israeli firms operating in the Palestinian Occupied Territories that maintain business relations with the Jewish settlements of the Jordan Valley. “The Corridor for Peace and Prosperity,” Jamal Jumaa warns, “goads the Palestinians, through economic cooperation, into recognising the presence of the Israeli settlements. What’s more, with such starting points, the benefits for the Palestinians will be minimal to say the least, since our farmers will never have the necessary tools to be at the top of the managerial pyramid and therefore they will have to make do with the crumbs that drop off the table.”

Even the building of “Morajat Road” seems to confirm Jumaa’s warnings. Officially, this road, as conceived in the plan, has the task of making the movements of the local goods and farmers along the Jordan Valley easier. Actually, it allows Israel to bar Palestinian traffic from state roads connecting Jerusalem to the Jericho area, thus it has a share in the development of the twofold traffic system—one for the Palestinians and one for the Israelis—which the UN spokesman for human rights himself, John Dugard, has described as being “semi-apartheid”. It is worthwhile to remember that the “Morajat Road” starts and ends with Israeli checkpoints.

Being allowed to criticise the “peace” and “development” patterns that were formulated at the Annapolis conference of the past month, as well as those ones emerging from Blair’s plans, is becoming an increasingly harder feat. Yet, some Arab regimes that maintain close relationships with the Bush administration are starting to have some doubts. Yesterday, while in Paris it was decided to provide Abu Mazen’s PNA with hefty financial aid, more than a few people wondered whether the Arab States will fulfil the obligations they undertook towards the Palestinian President the past month in Annapolis. Egypt and Saudi Arabia, in fact, seem to be reluctant to unreservedly take the side of Abu Mazen and to keep Hamas at a distance, which has controlled Gaza since last June.

Precisely from the Palestinian President’s entourage, it has been rumoured that Saudi Arabia is reconsidering the promise of covering half of the PNA’s yearly deficit (this year: 1.4 billion dollars). What’s more, only 80 out of 421 billion dollars that the Arab States granted to Abu Mazen in 2007 have been delivered.

On one hand, Saudi Arabia sides with Abu Mazen while on the other, it heistates in breaking off relations with Hamas, which represents an important portion of the Palestinian population.

Some day ago, the Hamas leader in exile, Khaled Meshaal, was warmly welcomed in Riyad by the Saudi establishment and therefore it is not surprising that the meeting was harshly criticised by the Palestinian President’s staff.

Translated by Diego Traversa and revised by Mary Rizzo, members of www.tlaxcala.es, network of translators for linguistic diversity.