Christians United For Israel Summit ...(and some say there ain't no lobby?) 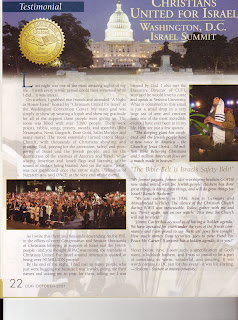 Click over the image to enlarge it. Well worth the effort!
What follows is a very strange document. It is page 22 of the October edition of the glossy booklet by Christians United for Israel, a lobby that claims it has 50 million members and 5 million Jewish sympathisers. Now, there are many who say, "Lobby? NO WAY!" I ask them to read this document which is the (claimed) testimonial of a young Jewish university student who attended their DC Summit. I have a few doubts that it's bona fide, because the grammatical errors you see - such as a comma before 'and' in a three part clause - are carried through in the rest of the booklet, which has as its publisher John and Diana Hagee and its writers people like David Brog (executive director of CUFI, executive at AOL, proud Jew and author of the article about Randy Travis and Joe Lieberman, "Separated at Birth" and Gary Bauer.) The young man has a secret identity, or else he's not in the habit of signing his name when making a testimonial, highly irregular! But, there are some very interesting elements in this letter, fake or not.

1) The student does not say he is an Israeli citizen, but a Jew, and he wanted to go with a Kippah just to show his "gratitude for all the support these people were giving us". Us. Hmm...

2) He says the place turned into a Mega-Church. I wonder if he's ever been in one. First of all, generally Jewish people do not enter into Christian churches, and if they do, wouldn't they expect there to be prayer and not political rallies? Instead we have this:

3) American and Israeli flags, the name of Jesus not mentioned even once the entire night. Although he contradicts himself later!! (They need a professional "proofreader and fact checker", methinks).

4) It is a lobby. This is stated very clearly, and every Congressman and Senator will get a visit from these people. "lobbying in support of Israel and the Jewish people". It is explicitly stated.

5) There is an evident racism in all of this. People treat him like he is a carnival freak, and he's glad to play the part. They hug him "because I'm Jewish... asking me to pray for them, telling me I was blessed by God".

6) The voice of the Jewish people in America (yes, Jewish) is the Church of Jesus Christ. What church is that? I'd like to know. Sounds like a strange Church if it's got American and Israeli flags and no crosses or turns the teachings of Jesus (oops, Yehoshua) on its head. Jesus would never have said, "let us pray for the destruction of our enemies". Quite the opposite. It's in their Bibles, if they know how to read.

7) The usage of the term GOYIM (all caps in the original, in fact, no changes were made to the original, as anyone can see from the image), and the other derogatory self-reference of the Christians.

8) The comparison of Iran to Germany and Ahmedinejad to Hitler needs no further comment. Just note it there and see how it is used in propaganda of all the lobbies, as well as being the foreign policy of Israel based on its usage of these images.

If that ain't a lobby, I will eat my hat, scarf and gloves.
mary

ONE MORE INTERESTING ELEMENT! Thanks to the attentive readers of Peacepalestine, more strange things jump out. James Bowen, the dedicated webmaster of Palestine Information with Provenance clicked on the image and was more careful and attentive than I was in transcribing. He wrote:

Mary
There is an interesting little detail on the picture you mentioned in your blog. Look at the signature given for the piece:
--Shalom - Student at Yeshira University
Note -- YeshiRa, not YeshiVa.
There is no such place as Yeshira University, although there is a Yeshiva University in New York.
Whoever compiles the stuff for the CUFI newsletter seems to be quite ignorant.
Christians United for Israel
Washington, D.C. Israel Summit

Testimonial
Last night was one of the most amazing nights of my life… I wish every Jewish person could have witnessed what I did… it was unreal.

On a whim, I grabbed two friends and attended “A Night to Honor Israel” hosted by “Christians United for Israel” at the Washington Convention Center. My main goal was simply to show up wearing a kipah and show my gratitude for all of the support these people were giving us. The room was filled with over 3,000 people. There were priests, rabbis, songs, prayers, awards, and speeches (Bibi Netanyahu, Newt Gingrich, Dore Gold, Sallai Meridor and many more). The room essentially turned into a Mega-Church, with thousands of Christians shouting and praising God, praying for the protection, safety, and prosperity of Israel and the Jewish people, and for the destruction of the enemies of America and Israel, while waving American and Israeli flags and listening to the sound of shofars being blasted. And yet the name “Jesus” was not mentioned once the entire night. (Yehoshua of Nazareth was said ONCE at the very end of the event)

As I write this there are thousands descending on the Hill, in the offices of every Congressman and Senator, thousands of Christians lobbying in support of Israel and the Jewish people – and you thought AIPAC was strong, the numbers of Christians United for Israel around America is quoted at being over 50 MILLION people!

By the end of the night, I had met so many people who just were hugging me because I was Jewish, giving me their names and asking me to pray for them, telling me I was blessed by God. I also met the Executive Director of CUFI, who said he would love to come and speak at Yeshiva University. What is contained in this email is just a small drop in a very large sea of awe and emotion from one of the most incredible events I have ever been to in my life. Here are just a few quotes:

“The sleeping giant has awakened and the Jewish people have a new voice in America – the Church of Jesus Christ… 50 million Bible Believing Christians and 5 million American Jews are a match made in heaven.”

“We are currently in 1936, Iran is Germany and Ahmadinejad is Hitler. The silence of the Christian Church during WWII was inexcusable. Today, gather with me and say, ‘Never again, not on our watch!’ This time the Church will not be silent!”

“Jimmy Carter has accused us of having a ‘hidden agenda.’ We have operated for years under the eyes of the Jewish community and I am proud to say that there are Jews here tonight! How much money from terrorists goes to your Fund For Peace Mr. Carter? If anyone has a hidden agenda, it is you!”

Never before have I seen such a sanctification of God’s name, a kiddush hashem, and I was so proud to be a part of something so warm, wonderful, and amazing. It was worth coming to DC just for this event – it was life altering.
--Shalom – Student at Yeshiva University