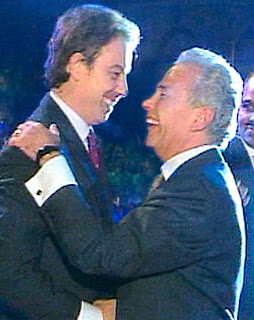 When the Levy Breaks: in the photo, Tony Blair and Lord Levy enjoying a carefree moment.

Back in October 2003 the Malaysian Prime Minister Mahathir Mohamad gave a speech at the Organization of the Islamic Conference summit wherein he said that “Jews rule the world by proxy…. they get others to fight and die for them."

These very alarming, yet explicit, statements made by a head of state drew some harsh criticism from state leaders as well as from influential Jews around the world who warned that it could spark more violence against Jews.

Clearly, the anticipated anti-Semitic tidal wave has yet to make it to any recognized shore. However, we have recently learned that more or less around the same time PM Mahathir that was speaking to his fellow Islamic leaders, in another continent, located at pretty much the other side of the planet, in a country that was already engaged in some fierce fighting to maintain Israel’s regional interests and hegemony, two prominent Zionist tycoons met the British Prime Minister for a ‘drink’. According to the Daily Telegraph, at a central London Hotel “David Abrahams, the property developer…entered a room already packed with Cabinet ministers and the party's most prized donors. Moments after arriving, Mr Abrahams was spotted across the crowded room by Lord Levy, the party's chief fundraiser. The Labour peer immediately left his group and swept over to greet Mr Abrahams like a long-lost friend with none other than Tony Blair in tow.”

We learned as well that David Abrahams, who had been affiliated then with the two rabid Zionist lobbies (‘Labour Friends of Israel‘ as well the ‘Jewish Labour‘) had donated £650.000 to the Labour Party by proxy, using other people’s names. This happened around the time the Labour Party took Britain into an illegal war based on a ‘sexed up’ WMD dossier, that according to some reports was partially put together in Israel.

Some would have liked to think that the time proximity between Abrahams’ unlawful activity and the Iraq invasion were a coincidence but then, last week Abrahams admitted to the JC (Jewish Chronicle) that “he had made his donations secretly so as to avoid accusations of his being part of a ‘Jewish conspiracy’.” Abrahams foolishly admitted that he was aware that his conduct could have been interpreted as a ‘Jewish conspiracy’. In fact, I myself think that it is far worse. In a recent piece I have argued that considering the British people’s public opposition to the war, and taking into account the scale of devastation this war brought on the Iraqi people, Abrahams’, Levy’s and their friends’ interference with British politics is no less than a ‘plot against the British People’.

And yet, I must admit that David Abrahams is a charming geezer. If he weren’t there, someone would have had to invent him. Being a chatterer, he just cannot stop himself from speaking his mind and sharing his authentic concerns with the rest of the world. Abrahams is probably one of the best glimpses we have ever had into the mind of a Zionist lobbyist.

Following Abrahams’ JC confession, we probably are entitled to deduce that unlawful conduct is OK as long as no one really knows about it. Abrahams, obviously succumbed to the most literal pragmatic interpretation of the liberal legalistic understanding of innocence: ‘One is innocent until proved otherwise’. This interpretation is commonly used by criminals and gangsters in their first press conferences.

However, gangsters tend to cling to this argument before they are fully indicted or confronted with real evidence related to their crimes. In most cases, gangsters are aware of the notion of ethics and its implications. Though they tend not to employ or follow ethical judgments, they recognize the possibility that other beings may do just that. Abrahams, on the other hand, seems to be totally foreign to the notion of ethics and any form of moral thinking. As he himself revealed in the JC article, it wasn’t the non-ethical behavior that concerned him, but rather what the Goyim may say. Rather than trying to explain why he unlawfully shoved money to a political party, he attempted to tell us why he did it in secrecy. The only way to interpret Abrahams’ strange confession is to remember that the sleaze master tycoon was talking to the leading British Jewish weekly. It is rather possible that he was trying to calm his fellow Jewish brothers down by addressing their serious and justified concerns. Abrahams spoke to the JC believing that the Goyim (Guardian, Independent and the BBC) may never notice what he had to say. He was evidently wrong. At the moment, for some obvious reasons, the Jewish press is closely monitored. In fact, the Guardian reported about Abrahams’ confession to the JC a day before JC made it to the news shops.

However, now Abrahams has been exposed, and as we learn from the Daily Telegraph’s article above, the Sadchen (matchmaker) in this disastrous affair was no other than Lord Levy, the Labour ‘honorary cash machine’. This all happened at the early days of the Iraqi invasion at the time British soldiers were fighting and giving their lives to reduce the last defiant enemies of Israel into dust.

I have good reason to believe that Back in October 2003, Prime Minister Mahathir Mohamad didn’t know much about Lord Levy and Tycoon Abrahams, thus when he said that “Jews rule the world by proxy” he was just guessing and exaggerating. Let’s face the facts PM Mohamad: Jews do not run the world by proxy, they just run the Labour Party (by proxy).

Interestingly enough, amongst my many sins, back in May 2003, a few days after Bush’s “Mission Accomplished” speech I was performing a short musical set in a Bar Mitzvah in Northwest London. Just before my set a Rabbi performed a Torah spiritual oratory spectacle in which he said:

“Never in our (Jewish) history have we endured such a great victory with such a little effort.”

The Rabbi’s moral was rather clear yet at the same time devastating: ‘once again we (the Jews) have managed ‘to get others to fight and die for us’. Like PM Mahathir, the Rabbi was obviously misinformed, in fact he was guessing. At the time the he couldn’t know about the serious ‘efforts’ made by Lord Levy and Proxy donator Mr Abrahams. He didn’t know that some Jewish tycoons invested big money in secrecy towards what was mistakenly seen at the time as ‘effortless victory’.

In an old paper of mine I tried to grasp the metaphysics of Zionist global lobbying:
“…there is no geographical centre to the Zionist endeavour.” I said there. “It is hard to determine where the centre of Zionist decision making is. Is it in Jerusalem? In the Knesset? …. In the Mossad? Or maybe in the Anti-Defamation League offices in America? It might as well be somewhere in Wall Street. Who knows?”

But then, it is of course more than possible that there is no decision making process at all. The beauty of a network operative system is that not a single operator within the network is fully familiar with the full scope of the network but is only aware of his personal role within it. This is probably the biggest strength of the Zionist movement.”

Abrahams and Levy probably didn’t conspire, it is even possible that they themselves didn’t know what they were buying. They acted separately and autonomously within a network. This network is very powerful and it is capable of achieving a lot, yet, when things go wrong, they can as well go terribly wrong. This is exactly the kind of concerns Abrahams shared with the JC the other day. It is the fear of the ‘other’, the deep sense of genuine Jewish guilt. When Abrahams told the JC “I didn’t want Jewish money and the Labour Party being put together”, it was clear that at least in his Jewish symbolic universe ‘Jewish money’ had some bad connotations while the Labor Party was associated with some glamorous power.

Deep in his heart, Abrahams didn’t feel good. Unfortunately, it wasn’t morality that concerned him but rather being seen as a conspirator by one Goy or another. Abrahams probably knows that Prime Minister Mahathir Mohamad wasn’t guessing or following the anti-Semite devil within him. ‘There was a proxy operation in place’ …. and at least momentarily other people happen to fight and die in the Zionist wars. In Abrahams’ favour it should be said that it seems as if he genuinely feels bad about it.