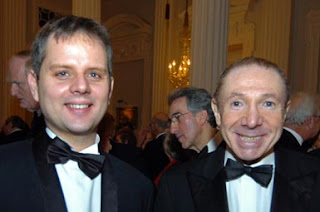 On Thursday afternoon, Gordon Brown learned that he was to become only the second sitting British Prime Minister to be subject to a police investigation.

This is happening less than six months after Tony Blair had left Downing Street under the severe cloud of a police probe into the Cash for Honours affair.

For Blair it was No 1 Labour fundraiser, the Zionist Lord Levy who got him into serious trouble, for Brown it is Mr David Abrahams (in the photo, Abrahams is on the right, with an MP friend) , just another ‘Friend of Israel’ and a provincial chairman of Jewish Labour, who may be the one to finish off his political career.

Once again, the Labour Party had to admit that it erred by accepting donations from dubious sources. '”The money was not lawfully declared, so it will be returned,” said the Prime Minister, after the disclosure that Labour had benefited to the tune of more than £600,000 from a bizarre funding scheme arranged by David Abrahams, an eccentric property tycoon who decided to donate his money by proxy.

Apparently, Lord Levy and David Abrahams were not alone in dragging Labour towards yet another political disaster. The third corner in this disastrous triangle is Mr Jon Mendelsohn, a man who grasps the power of money and politics. Mr Mendelsohn, an ex-chairman of Labour Friends of Israel, is the current chief fundraiser of the Labour Party.

Seemingly and shamefully, the Labour Party did not learn its lesson following the Lord Levy ‘Cash for Honours’ scandal. Once again they let the supporters of Israel take care of their material needs.

I find myself wondering how come Labour is so heavily entangled with those ‘Friends of Israel’? However, the most crucial issue here is actually the fact that not a single British media outlet dares to ask the most important questions: what is this cabal of self-declared ‘Friends of Israel’ trying to achieve by pouring money into political parties? What is it that it is trying to buy? Where is the money coming from? Is it their own money or is it delivered by their ‘friends’ in the Israeli embassy or another Zionist apparatus?

British society is a multicultural society, this means that very many people of different ethnic and racial origins live together in peace and mutual respect. This is probably the greatest asset that the British culture can offer momentarily, a multi-ethnic society made of communities of people who treat each other with respect and tolerance. Many British Jews benefit and contribute to the British multi-ethnic society. However, within the liberal multi-cultural discourse it is ‘politically incorrect’ to associate ethnicity and unlawful acts, something that our ‘Friends of Israel’ and ‘Jewish Labour’ exploit beyond belief. Though they operate as an ethnic lobby, promoting some radical, exclusive Jewish National interests, they wouldn’t like to be exposed as such, definitely not in reference to their overwhelmingly disclosed unlawful activity.

A quick glance into the ideological fundaments the ‘Labour Friend of Israel’ makes it clear that we are dealing here with some ardent Zionist Neo-conservative worldviews: “We are fundamentally sympathetic to Israel’s position as a liberal democracy facing constant security dilemmas and existential threats”. For those who fail to understand: Israel is indeed a democracy as long as you are Jewish. Within the Israeli controlled territories, the vast majority of the Palestinians are not even citizens. Strictly speaking, the ‘Labour Friends of Israel’, “fundamentally” supports an apartheid racist Jewish state i.e. Israel. If this is not bad enough, they do just that at the heart of British politics. Moreover, they do just that without even respecting the elementary British ethical political norms.

Amid British multi-culturalism, no one in Britain dares question the clear cabal of Zionists who were fully engaged in transforming British politics into a Zionist internal affair. British press and the media is fully aware of the complexity entangled with those ‘Friends of Israel’ and their ‘fundamental sympathy’, yet, they are filling their mouths with water. Instead of standing up against this dangerous lobby that acts to ally Britain with an apartheid state, they use some sticky language, leaving the conclusions to the readers, if they are able to make up their minds on their own. They refer to Jon Mendlesohn’s affiliation within the ‘Labour Friends of Israel’, they refer to David Abrahams being a “provincial vice-chairman of the Jewish Labour Movement”.

I think that British media should be brave enough to stand up and report that there is an Israeli lobby in Britain acting under the name of “Jewish Labour” as well as ‘Labour Friends of Israel’. There is no German lobby in Britain acting under the name ‘Aryan Labour” operating as well as ‘Friends of Germany’. Nor there is a ‘Black Labour’ organisation also lobbying as the ‘Friends of Zimbabwe’. Seemingly, Zionist lobbyists are the only ones who get away with their unique form of ‘racially orientated’ lobbying activity.

Funnily enough, the only press outlet in Britain that was brave enough to confront the severe implications of the current Jewish affair was actually the leading British Jewish weekly, the JC (Jewish Chronicle).

The JC does realise that the affair would eventually affect the community. Seemingly, the JC does not doubt the truth behind the current revelation. “The two main figures in this week’s controversy are Jon Mendelsohn, the Prime Minister’s election campaign fundraiser, and property magnate David Abrahams, who is accused of breaking the law by using third parties to disguise donations of £600,000 to Labour”, said the JC.

Yet, being the leading Jewish press outlet and addressing mainly British Jewish audience, the paper offers as well an ‘Elder of Zion’ like pretext just to try to cheer its readers. There is a “whiff of antisemitism about it”, says MP Andrew Dismore to the JC. “People are looking for links to Jewish interests and evidence of a Jewish conspiracy. The press are turning every stone to find one.”

I find myself wondering how the JC can report some clear unlawful conduct in one paragraph and then suggest a ‘Jewish conspiracy’ in the next. For those who do not realise, Abrahams and Mendelsohn are not a hidden conspiracy, their acts have been exposed in broad daylight, they are mainstream news on the front of each paper in this country, subject to police scrutiny.

“The Hendon MP said he did not believe the case would have received such intensive coverage if it did not involve Jews. The undercurrent of antisemitism is worrying.”

May I assure the ignoramus Hendon MP that an exposed cabal of Saudi businessmen trying to buy a leading British party would get at least as much attention.

Paul Usiskin, another Labour supporter and co-chair of Peace Now UK, said: “It doesn’t do the reputation of people communally linked to Israel any good to find themselves willingly or unwillingly at the centre of matters to do with politics and money.”

Once again, I find myself bewildered, this Usiskin sees things through, yet he himself involved in some Judeo- centric political activity as a lobbyer for the Zionist Peace Now UK.

“I hope,” adds Usiskin, “that in contrast to previous issues of this kind, people do not link historical relations between Jews and financial affairs.”

And I find myself wondering again, why shouldn’t they? In fact, every British citizen in general and British Jews in particular must reflect just about that because this is the crux of the issue.

Jon Benjamin, the Chief Executive of the notorious Board of Deputies, the Jewish Lobby that recently tried to shatter the career of the democratically elected Mayor of London, was there to say, “there is wide concern in this story and clearly there is a potential for it to turn against us. We have been there before.”

For a change, I agree with Jon Benjamin. Indeed you had been there before and more than once, yet somehow you never learn your lesson.
See also: GILAD ATZMON - A PLOT AGAINST BRITAIN?

Listen to Gilad Atzmon in an audio interview where he mentions this scandal and much more:
http://www.indymedia.org.uk/media/2007/12//387156.mp3