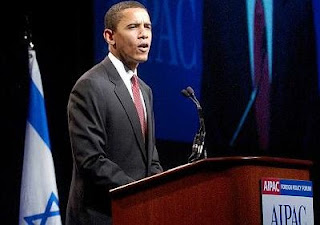 Dear Senator Obama,
We Palestinians, whether in Palestine that was occupied in 1948, or Palestine that was occupied in 1967 and in our diaspora/Ashatat counting now over ten million uprooted people, were shocked and saddened to read your letter addressed to Mr. Khalilzad, U.S. Ambassador to the United Nations. We were shocked and astonished that you, especially as a U.S. citizen of African roots, would not have remembered the stance of the Zionist state of Israel during the uprising/Intifadah of the non-white people in South Africa. Those men and women, who are a part of the indigenous population of the continent where your roots are still deep in its soil, were not supported in their struggle by Israel. In fact, this rogue state was one of the very few countries in the world to ally itself and supply the apartheid colonizing establishment in South Africa with all its requirements of arms and weapons to maintain its apartheid regime, so that it could fight and subjugate the revolting citizens of the colony, who only sought to obtain equal rights in the place of their birth.
We were astonished to read that you support the apartheid state by saying "Israel has the right to respond".
Has it not occurred to you, Mr. Senator, why the indigenous population of Palestine have been uprising for so many decades, and suffering the death of thousands and thousands of their men and women of all ages including the very young and very old, who are living in refugee camps away from their own homes and land that they had been developing with sweat and blood for thousands of years? We are saddened that a man of your caliber who promotes the rights of the subjugated masses in your great nation, the United States, and everywhere in the world, who condemns the Bush regime because of the wars it is waging around the world resulting in thousands of deaths, with its maimed men and women serving in your nation's armed forces away from their homes and beloved ones expresses such opinions regarding our people. You are aware of the millions of deaths, the men, women and children who have become disabled, and the other millions of individuals who have been uprooted and are living in the status of poor refugees in and out of their homelands as a result of these criminal wars?

Mr. Senator Obama, how is it possible that a personality of your status, caliber and intelligence has missed to read, see and hear the news of how Palestinians in occupied Palestine are treated like slaves if not animals, which is by far worse than the way enslaved Africans were treated for centuries by the American colonizers? Did you read, hear or see how those Palestinians are tortured and dehumanized on the over 750 checkpoints and crossings all over the occupied West Bank of Palestine? Did you hear, read or see how barbaric Zionist colonizers are still stealing more and more Palestinian land to build more Zionist colonies over what remained unoccupied and un-stolen of Palestinian Arab land, and how these wild racist colonialists are cutting down millions of centuries’ old olive trees, razing thousands of acres of farmland, demolishing thousands of residential, office and industrial buildings and leaving thousands of people living in the open air or tents in the heat of the summer or the freezing cold of the winter? We doubt that you don't have the courage to admit that you have heard, seen or read about the apartheid wall that Zionists unashamedly call "security wall" while the main reason is to steal more land in the 22% left of Palestine unoccupied in 1948, and let's not forget the stealing of fresh water resources to be used by Zionist colonialists to be pumped back out of their sewage system as filth and flooded over the fields of the poor Palestinians who have not been colonized yet?! And you turned your face away pretending not to have seen, heard or read about all that and many and many other war crimes the Zionist state of Israel that had been denying Palestinian Arabs to exercise their Right of Return to their stolen homes and land!!!!

It would be a shame if a man of your caliber and status does deny seeing, hearing and reading all about these atrocities against a people that belongs to the human race in the twentieth century, only because he might gain the blessings of the Zionist Israeli lobby, to be elected as president of the United States, while knowing well that those who control the possibilities and means shall put all the barriers and checkpoints in your way to deprive you of this pleasure.
Mr. Obama, have the courage to include among the causes you fight for to admit that Palestinian Arab resistance are the people who are fighting in self defense and not the other way round.

Palestinian resistance, by international legal rules, is accorded every right to use any means to regain all their rights in their land and as human beings, and live in a democratic, free and sovereign state.
Sincerely,
Adib S. Kawar
An uprooted Palestinian Arab still living as a refugee for the last 60 years
Beirut –Lebanon

1.23.2008
Obama: Israel was forced to close Gaza
The letter from the Senator to the Ambassador speaks for itself:
Dear Ambassador Khalilzad,
I understand that today the UN Security Council met regarding the situation in Gaza, and that a resolution or statement could be forthcoming from the Council in short order.
I urge you to ensure that the Security Council issue no statement and pass no resolution on this matter that does not fully condemn the rocket assault Hamas has been conducting on civilians in southern Israel...
All of us are concerned about the impact of closed border crossings on Palestinian families.
However, we have to understand why Israel is forced to do this... Israel has the right to respond while seeking to minimize any impact on civilians.
The Security Council should clearly and unequivocally condemn the rocket attacks... If it cannot bring itself to make these common sense points, I urge you to ensure that it does not speak at all.
Sincerely,
Barack Obama
United States Senator