Gilad Atzmon - Two Jewish Jokes (and a Hain in the Middle) 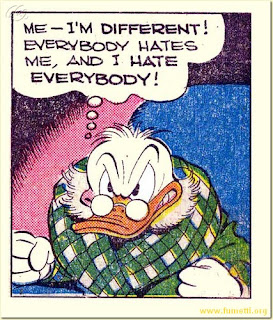 A story is told of a Londoner, a Jewish man who was riding on the London Underground reading an Arab newspaper. A friend of his, who happened to be riding in the same underground car, noticed this strange phenomenon. Very upset, he approached the newspaper reader.

"Moishe, have you lost your mind? Why are you reading an Arab newspaper?" Moishe replied, "I used to read the Jewish newspaper, but what did I find? Jews being persecuted, Israel being attacked, Jews disappearing through assimilation and intermarriage, Jews living in poverty. So I switched to the Arab newspaper. Now what do I find? Jews own all the banks, Jews control the media, Jews are all rich and powerful, Jews rule the world. The news is so much better!"

Truth must be said, Moishe, is telling the truth here. The Jewish press in Britain is panicking lately and they have good reason, too. While the British papers are filling their mouths with water hiding the real story behind the huge Labour donation sleaze, the UK Jewish press is overwhelmingly concerned with the unveiling saga. We have already learned about Lord ‘cash machine’ Levy who acted as ‘No 1 Labour fund raiser’. We have learned recently about David Abrahams who donated his money to the party by proxy. Both Levy and Abrahams were overwhelmingly active at the time Britain was taken into an illegal war by the Labour government. David Abrahams already admitted in an interview to the Jewish Chronicle that he donated money by proxy to “to quell conspiracy fears”.

Interestingly enough, the ‘Political Parties, Elections and Referendums Act 2000 ’ introduces some clear regulations concerning donation to political parties in Britain. According to the 2000 Act, donators have to report donations worth more than £1,000 from permitted donors (individuals on the UK electoral register, or UK-registered companies) and donations worth more than £200 from unidentified or impermissible donors. The 2000 act is there to protect Britain’s political world from being subject to any criminal or foreign interests. The act is there to protect Britain from conspiracy or anything that may even look like a conspiracy.

Levy and Abrahams were prominent activists in the ‘Labour Friends of Israel’ and ‘Jewish Labour’. They both operate as Israeli lobbyists. It is more than possible that their interests as openly rabid Zionists do not exactly match the British interests. I am not here to suggest that this is indeed the case. However, Abrahams’s confession to the JC is there to suggest that at least Abrahams himself thought that his donation to the Labour party could be interpreted as a conspiracy.

Yesterday, Peter Hain, a senior British Cabinet minister resigned. Once again following a row over political donations and guess what, once again it is Zionist donators who put money into his campaign by proxy.

Hain, who served as Work and Pensions Secretary said he was leaving to clear his name after electoral authorities referred questions to the police about the funding of his unsuccessful campaign to become deputy Labor Party leader. Clearly, the British press avoids questioning the identity of the donators, and more crucially there is the disturbing question: what was it that they tried to buy? But as Moishe confesses in the joke above, Jewish newspapers are there to spread the depressive news.

Last week Jewish Chronicle’s report on the Hain affair is indeed very revealing yet concerning.
“International diamond broker Willie Nagel, 83 — one of two Jewish benefactors to Mr Hain’s campaign through the Progressive Policies Forum — told the JC he had donated and loaned money to PPF and had “no objection that this money [had been] used to support Peter Hain’s campaign”.

Seemingly, Mr. Nagel changes league quite easily. As much as was happy to donate to Labour candidates in power, he was delighted to donate to the Tories at the time when they ran this country.

Here is the JC report:

“Mr Nagel, a member of St John’s Wood Synagogue, was also known to be close to the Conservatives during the premierships of Baroness Thatcher and John Major. He reportedly donated to Mr Major’s Huntingdon constituency, giving rise to reports in the media that he had attempted to interest the then-prime minister in Israeli-made unmanned aircraft at a time when the UK maintained an arms embargo on Israel.”

Clearly, Mr Nagel operates here as a foreign lobbyist for Israeli interests and even military interests. As much as Peter Hain was happy to receive Mr Nagel’s money, it does raise big questions as to whether Mr. Nagel was a ‘permissible’ donator. Though, he is a UK citizen, he clearly represent some foreign interests.

The JC continues. Mr Nagel “has been a vice-chairman of Israel Bonds UK, and played a major role in the Balfour Diamond Jubilee Trust and the British Overseas Trade Group for Israel. He is also a life-long supporter of both the Labour and Conservative Friends of Israel and appears regularly in the JC “Guest List” pages alongside leading Israeli and communal figures.”

Clearly Mr Nagel was there to buy Israeli interests and it is NO coincidence that Peter Hain ‘forgot’ to report of his voluntary contribution. I ask myself whether there are many donators in this country who openly send money to the two rival parties. I guess the answer is no. There are not many, there are just very few.

However, Mr Hain’s other benefactor is another prominent Zionist named Isaac Kaye. Mr Kaye is a South African-born multi-millionaire who was known for his support of the South African Apartheid regime.

Mr Kaye, 78 year old a man with dubious past “is the former chairman of Norton Healthcare, which was investigated by police looking into an alleged £400 million price-rigging of pharmaceuticals sold to the NHS.” Mr Kaye is obviously a rabid Zionist and a major Israeli Lobbyist. Again the JC report that Mr Kaye “has backed the Community Security Trust, UJIA and other Jewish and pro-Israel organisations. He is on the board of Bicom, the Britain-Israel Communications and Research Centre, and is a governor and major benefactor of the Hebrew University, where he has endowed the Kaye Research Awards.”

Interestingly enough, the Tories here do not do much to expose the identity of the Labour proxy donators. The reason is simple, they are backed by the very same people. We have read about Mr Nagel swinging between the two parties. Recently Parliament's sleaze watchdog has launched an inquiry into complaints made against shadow chancellor George Osborne. Mr Osborne allegedly received money from some of the wealthiest people in Britain, including banking heiress Lady Serena Rothschild, believed to have donated £190,000 to Mr Osborne.

Moishe is correct, the JC report is very concerning. The truth of Israeli lobbying in Britain is totally revealed in the Jewish Chronicle paper, God bless them. Interestingly enough, the British press wouldn’t touch the crux of the matter yet.

From Moishe’s point of view, the Guardian and the Independent are not a major concern for the time being. This might be the biggest asset of Britain and its tolerant culture. However, bearing in mind the genocide in Iraq, Britain has been led into its most devastating colonial phase ever by the Labour party. At a certain stage the question will be raised and it won’t be too long before the names Levy, Abrahams, Kaye, Nagel and a few others to pop up. This is very depressing and may even be very worrying as far as Moishe is concerned. I understand Moishe’s concerns and even feel for him.

However, since we have launched this article with Moishe’s joke it would be rather appropriate to end it with just another very short one,