No Hain, No Gain: More UK Sleaze Scandals for Israel 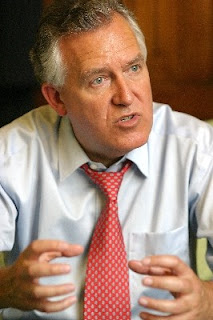 From Peter Hain’s Website:
"I also believe in a society based upon the principles of mutual co-operation and mutual aid, not one reliant on personal greed in which affluent elites grow still more powerful and rich, whilst the weakest go to the wall, hence our socialist commitment to spreading wealth and ownership more evenly and our belief in high quality public services which we must all be prepared to fund through fair taxation. And also our policies for combating world poverty through record levels of international development assistance and providing debt relief for the poorest countries.

Our socialist vision is of a Britain that stands for justice, freedom and morality both at home and abroad."

Peacepalestine receives many documents to be published. This author is unfamiliar to me, but I thought the document interesting enough to publish.

How much more can the British electorate swallow? Once again the Labour party is caught in a donation scandal, and guess what, yet again it is Zionist benefactors who have been exposed trying to buy some dubious favors by proxy. While British journalists are muted by political correctness and mumble politely about the logistics of party-politics funding, an unmentionable truth is emerging into the public forum, a truth that is fast becoming as undeniable as the Holocaust: all these donators are Zionists and they are all attempting to exploit the British parliamentary system to profit the Jewish state of Israel. They realize their conduct is immoral and illegal so they hide their identities, employ proxy donators and in the most recent incident, fabricate an entire company so that they may channel funds without public scrutiny. And these are just the ones we know about.

We had more or less two weeks or so without learning about a prominent Jew trying to buy a state, a war or a politician but alas, the same story is unfolding upon us again. The plot is so familiar it’s verging on being boring.

This time it is Labour Secretary of State for Work and Pensions, Peter Hain who is accused of sleaze. Apparently, Hain failed to report who financed his failed campaign for the Labour deputy leadership to the tune of ₤103,000. I am sure that you have guessed already, Hain’s main backers are no others than two hardcore Zionists of the worst order.

Peter Hain, now 57, first caught the public eye in the late 1960s as a young radical opponent of apartheid in South Africa. Hain’s reputation as an anti apartheid activist lasted for more than three decades. Not anymore however, Hain has now been exposed sleeping with the devil. He was receiving money from no other than Isaac Kaye, a former supporter of the National Party in apartheid-era South Africa. Like proxy donator Abrahams, Kaye is a major investor in Israel and used a sophisticated tactic to hide his identity; a ‘think tank’ of reputed left-wing persuasion entitled the ‘Progressive Policy Forum’ which was established for the sole purpose of concealing the identity of Kaye and his cohorts.

While debate in Britain centers on how ethically malleable and reprehensible Mr Hain must be to accept such a gift, Andreas Whittam Smith of the Independent yesterday suggested that the criminal inquiry into the donation scandal “must start with the business donors”. It is indeed all about the backers and that which they try to buy. Whittam Smith then referred to Issac Kaye’s involvement in a suspected £400 fraud against the NHS and to his participation in the “gifts of influence” scandal in South Africa during the 1980’s. However, this relatively courageous journalist falls short of revealing the most devastating crux of the matter; Issac Kaye is a proud Zionist campaigner.

Indeed Kaye wasn’t the only one to donate money to Hain. Willie Nagel, 82, a prominent diamond broker has a long history of backing politicians regardless of their ideological league. A decade ago, the chameleon millionaire Nagel sent £2,000 to John Major. He was then invited to join the PM in a trade mission in Israel and Jordan. According to the Independent, Nagel attempted to interest John Major in an unmanned aircraft developed in Israel, even though there was an arms embargo regarding Israeli equipment at the time.

Seemingly, Whittam Smith is well informed about Hain’s affairs. Clearly Whittam Smith knows enough about how the Israeli Lobby is currently operating in Britain, sending money to parties and blatantly ignoring the UK donation laws. Whittam Smith is courageous enough to suggest that the inquiry into the donation scandal “must start with the business donors”. Yet, Whittham Smith falls short of pointing at the continuum established between Nagel, Kaye, Lord Levy, Abrahams, Mendelsohn and the Labour Friends of Israel. He wouldn’t stand up and ask what is it that these proud Zionist are trying to buy.

Levy, Medehlsson, Abrhams, Nagel, Kaye and others are prominent, successful people. They are far from being stupid. I wondered yesterday while reading the Guardian cover of the topic what they think to themselves. Surely they realise that their criminal conduct can be exposed, surely they realise how badly it can all reflect on British Jews. The only answer I could come up with was that these prominent Zionists must believe the Goyim around them are stupid. But are they stupid? Not at all, yet no one can stand up and say, “Enough is enough”. No one in the British media is willing to stand trial in a kangaroo court. As I write this, yet another debacle is unfolding regarding the Tory shadow chancellor George Osborn and his acceptance of various funds including ₤200,000 gift from Lady Serena Rothschild. I ask myself how many scandals will it take before the unmentionable question is finally asked?

Within a politically correct Liberal discourse dominated by Holocaust memorial and a severe dollop of post-colonial guilt, no one in Britain can stand up and say the obvious. Unfortunately, if issues in Iraq are not resolved soon and the Brits will land at their next ‘post colonial’ regret phase, they will once again have to identify their crimes against humanity. They will no doubt remember the ‘Levy’s and the ‘Abrahams’s that financed warmonger Blair. They will remember who rallied for the war, who legalized the war and they will reflect on that dubious ‘think tank’ that preaches murderous interventionism in the name of democracy and liberalism.