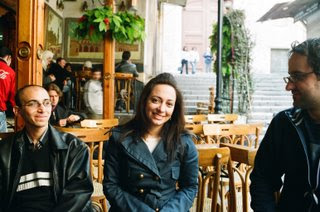 from the outstanding blog Decentering Damascus , an important reflection on how we are "reading" this crisis, and a call to widen our expectations about what is important for Gazans and Palestinians to have. Not just food and gas, but a decent, normal life. (in the photo, Razan with other bloggers in Syria). -mary
I don’t appreciate it when Arab bloggers or Arab media agencies report and cover the Gaza blockade merely by talking about the death of children and women – I’m not sure why men's lives don’t count – as if the problem is not death in itself but the “death-of-children”. So the counter argument of Israelis would be by starting counting the Palestinian children who've died due the siege and support their arguments with the lack of recourses:

"More Muslim mendacity. If children were indeed starving, why are there no photos of their swollen bellies?"

According to this logic, one can argue that since there are no photos of the Holocaust Gas chambers in which the Jews were collectively massacred by the Nazis, then one could surmise that the Gas chambers didn't exist.

To get back to my point, the argument to oppose the Israeli apartheid policies on the Gazans and Palestinians in general shouldn’t be through counting/demonstrating dead children and women or even to focus merely on the inhumane situations in which the Palestinians are living, but the argument should address the "apartheid racist logic" that produced such inhumane practices. My problem is not "bringing up" the victims in the Gaza blockade coverage but rather making it "the" argument to oppose Israel as a counter argument. Death, shortage of fuel, food and medicine are only the "visible" practices of an Israeli apartheid state, they're not "the" problem of this state and hence they shouldn’t be our rhetoric and our defense against Israel.

It seems that we have the right to "speak", so loudly, against Israel when we have a picture of a child dying that without this child, we wouldn’t have a case against Israel's inhumane blockade of Gaza.

The Arab rhetoric should renew its arguments, that again, are bombastic and not strategically analytical in reading their own realities in relation to the enemy or in reading the enemy's strategy that constantly presents itself as a "prior" party in the "Palestinian-Israeli struggle." The thing that would damage the core of the Palestinian cause when readers would support us merely as sympathizers with the dead children and not as supporters to Palestinians' right to live securely and equally to the Israeli citizen.

Having said that, I have something to say about the Israeli right of self-defense against Qassam rockets.

Before assuming there is an opponent struggle taking place between the Israelis and Palestinians, one should agree then that the two parties, equally, have the basic right to live peacefully and securely, and accordingly have the right of self-defense. But when Israel, supported by the UN, US and Europe, keep prioritizing the Israeli citizens at the expense of the Palestinian citizens, one should not adhere to the term "Israel-Palestine struggle" since it suggests adversaries. In "Israel-Palestine struggle" there is one party -Israel- who has the right to have a life, hence the right of self-defense, and for that right, it has the right to control the other party's right to live peacefully: it decides on behalf of the Gazans how they should live: "not easily", and block their access to fuel, food and medicine and arbitrary night-raid their homes on their heads.

This Israeli right to live and right of self-defense is embedded in every single report, with or against Israel’s complete closure of Gaza Strip:

“We all understand the security problems and the need to respond to that but collective punishment of the people of Gaza is not, we believe, the appropriate way to do that,” said John Holmes.

So while the world agrees on Israelis right to live securely, the world is sympathizing with Gazans lack of fuel, food and medicine. i.e., lack of life.

Again, the world does prioritize Israelis as they support the Gazans now.

And the Arabs celebrate this utterly biased stand with the Israeli right to be secure when their mere opposition to the siege is dealt on humanitarian basis while they should be arguing for the Palestinians’ right to live equally as the Israelis, securely and peacefully, not just in regards with their basic needs to survive.

Furthermore, all the reports seem to be embeddedly convinced that Israel’s siege on Gaza is a "reaction" to Qassam rockets when they recognize Israel's right to self-defense but shifts its attention to Gazans humanitarian rights. I find this rhetoric as apologetic to Israel’s terrorist policies with the Palestinians: linkage, between Qassam rockets and Israel’s two years siege on Gaza is dealt with on one level, as if the damage on both sides are similar. Let's take a look at Gaza's damages from the siege:

68 Patients killed by Israeli Occupation due to Closure!

1562 patients in need of treatment outside Gaza Strip

22 money holistic are suspended from work due to the siege

107 class of basic medicines are depleted from Gaza Strip

97 sorts of medicines on the verge of depletion

136 medical instrument are stopped or our of order

160 thousand workers are out of work

3000 fishermen become out of work due to siege

$370 millions are the costs of stalled construction projects

$14 million are the wastage of strawberry and flowers season

4500 strawberry farmers become out of work

470 cancer patients are likely to die

And on the Israeli side:

Homemade rockets have killed in a most updated report 12 Israelis including three children, according to Israeli Defence Forces.

"Qassams are very primitive missiles and their main effect on Israelis in the area is psychological torment - a kind of Chinese water torture."

So I wonder how can psychological insecurities be considered parallel to Palestinian damages mentioned above, and how can two years of siege is considered as a reaction to these primitive rockets? Hence the linkage that is meant to be apologetic to war crimes committed on civilians to maintain security not to the lives of Israelis, but to their psychological situation.

I find the argument in B’Tselem report on the closure of Gaza Strip situation stands in its own to unfolding the truth behind the Israeli siege on Gaza:

Indeed, Sderot is inhabited by "Mizrachi" Jews and not by Azhkenazis, some of the inhabitants feel insecure not only from the Qassam rockets but by the racist Israeli government:

"The worst part of all this isn't the rocket fire - it's the fact that the government just doesn't care," said a Sderot settler.
I reject the article altogether and I think it sheds light on something that can be useful to unfolding Israeli government's lies in claiming its "need to protect" its settlers; they're not killing civilians "for" Sderot settlers but "against" Gazans' political background; i.e., Hamas. So the Siege is strictly practiced for political reasons and not for security reasons.

Why is Israel targeting Hamas now? This is where my amateur analysis ends.
http://ya-ashrafe-nnas.blogspot.com/2008/01/very-important-rockets.html Be sure to check out the Flickr photo sets. She is an extraordinarily talented photographer too.