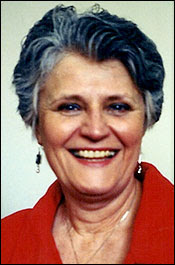 This is one of the most enlightening pieces I've read in a long time! Please read it and.... free your mind!!

by Carolyn Baker
http://thewhiterose.wordpress.com/
A professor looking to stimulate interest in the obligatory compositions prepared by his freshman English students asked me if Iwould come to his morning classes last Friday to answer questions about 9/11 that the students had brought up after a viewing of `Loose Change'. I was grateful for the opportunity and felt confident as we walked toward the lecture hall because I believed that I would be ableto handle their questions. In my mind, the challenges I would face would be based on my knowledge of factual information and my ability to convey it coherently.

I never suspected that I would be ambushed by a furious student who was already shouting at me that I was an `anti-Semite' even before I reached the classroom. That emotional barrage never ended from that moment until the class disbanded. It was dramatic. He was unable to stay in his seat and jumped up and down and moved around the classroom, his hand waving wildly to get his turn to ask questions that were in essence hostile accusations, phoning his `friend' so that his `friend' could hear my comments, intrusively shoving that phone at me.

There was no explanation or fact that I was able to provide that would assuage his rage. It was immaterial to him that there are Jewish people who are prominent in 9/11 studies and activism. Or that there are Jewish members in the Tampa 9/11 Truth group. Although nothing I said could have been interpreted as remotely anti-Semitic, the topic of 9/11 had pushed his `Anti-Semite' button.

When I told the group that I thought that the perpetrators of the 9/11 crimes would have included members of the secret services of Great Britain, Germany, Israel and the US, he could only focus on the mention of Israel. The mere fact that the 9/11 topic was addressed seemed to him an abomination. He brought up Holocaust Deniers.

In spite of the agitated student, the discussion continued and a lot of good questions came up. To the question of whether 9/11 truth was disrespectful to the surviving family members, I said that the family members were the ones who had pushed for the investigation and that their questions had remained unanswered by the 9/11 Commission Report. And that their film Press For Truth is documenting their ongoing quest for the truth.

To the question of how a conspiracy could be kept hidden by so many for so long, I mentioned that the Manhattan Project to develop the atom bomb had involved thousands and also explained about the moles occupying nexus points in an organization (eg Radical Fundamentalist Unit of the FBI) a la Webster Tarpley.

To the question of why there were no whistleblowers, I told them that there have been hundreds and gave them von Bulow, Michael Meacher, Bob Bowman. Patriots/ Pilots/ Architects/ Scholars for 9/11 Truth. We discussed the media blockade made possible by the consolidation of the media and orchestrated by the interlocking directors of the major corporations.

To the question of why they would do such a thing, I talked about the military strategy document, the Project for a New American Century, with its demented world domination scheme, set to be triggered by a catastrophic and catalyzing event – the new Pearl Harbor AKA the 9/11 attacks.

But those are mere facts and the `anti Semite' syndrome, like the 9/11 denial syndrome, is not cured by applying factual information. In a contest of raw power, mind control and propaganda win over facts. Emotions rule and anger and fear are the king and queen.

Creating programmed responses to conversational triggers aids in squelching societal debate. "Conspiracy theorist, whack job, holocaust denier, wing nut, absurd, anti Semite, crazy". Attack the messenger to discount the message. Interrupt him, talk over him, make him lose his train of thought, ridicule him, insult him. No issue is to be addressed; no evidence is to be assessed - ever.

The resulting emotions of humiliation, embarrassment, shame, or guilt usually cause the targeted person to desist. How many topics are out of bounds due to `political correctness'? Limiting the parameters of the national conversation is integrated and prearranged. Forbidden topic number one is why we are fighting proxy wars for Israel and where our congress' allegiances should lie when deciding matters of war.
I confess I have not read Mearsheimer and Walt's article or their new book. But I will, now. That boy woke me up and I thank him for that. I have never been called an anti Semite and the sting is still fresh on my cheek.

Even without mentioning Israel, by choosing to talk about 9/11, an effort is made to label that anti Semitic. The creation of taboo subjects is a form of mind control. Think about it – if you can!

The very word `anti Semite' itself goes off like a hand grenade and destroys intelligent discourse in a wide perimeter. This artificial construct is maintained by the victim complex created due to WWII and the constant repetition of the Holocaust history. It is not permitted to note that the Palestinians are suffering as much -or more- today under the Israelis as the Jews did in the ghettos of Eastern Europe.

The victim of genocide is now the perpetrator of genocide but that observation is strictly prohibited in all polite conversation.

That young man is not a natural product of a balanced world. He is the product of the `social scientists' who take innocent babes and inoculate them with poisonous ideas and belligerent tactics. He is under the tutelage of those who are creating our `matrix' and he has been a malleable child, emotionally susceptible and easily manipulated into serving as a hound for the masters. I am sure that they are proud of their little Frankenstein, they can send him out today to disrupt classroom discussion and tomorrow he will be a willing servant infiltrator in our business and political arenas. Another `dual citizen' like Henry Kissinger, Michael Chertoff, Paul Wolfowitz, Richard Perle, Doulas Feith, Dov Zakheim, Ari Fleischer, Elliot Abrams, Scooter Libby, or William Kristol.

The sum total of what you and I believe about the world is as distorted as that young man's idea. The political map and the evolution of the fortunes of the peoples of the world have been engineered. The Middle East map is relatively new and the present national borders are artifices, contrivances to set in motion the conflicts we see today by which the region is controlled. Why does Israel exist? Was it set up to be a continual thorn in the side, a gaping wound through which conflict could be plunged, keeping the region in conflict to feed the war machine, engineer regional depopulation and eventually control the Middle East and withdraw her vast energy resources?

With all the talk in the US and Israel about the importance of religion, where are the major religions in all of this? Where is the love? The forbearance? The forgiveness? The charity? What a monumental lie, to ignite this area of the world under the guise of religious differences.
Meanwhile we jump – or are jumped - from one irrelevantent ertainment/infotainment topic to the next while the puppetmasters set the stage for the next act where America as we know it ceases to exist as the globalists bring her to her knees and whip her into submission by means of the engineered economic collapse. While we dance to the tempo set by their orchestra playing on their instruments in their scale of their choosing.

There is a war on for your mind and stepping outside the matrix is harder than you may realize. Literally, the background chatter is set by them. Every quip, every commonly held assumption, every knee jerk assertion has been programmed into us. Examine your thoughts and free your mind.

*****
http://carolynbaker.net/
Welcome to Speaking Truth To Power—a website owned and managed by Carolyn Baker. Carolyn is an adjunct professor of history, a former psychotherapist, an author, and a student of mythology and ritual. This website offers up-to-the-moment alternative reporting of U.S. and international news, articles containing information and opinion, and a venue of support and connection for awake individuals who want not only to be informed, but to organize their lives and communities in ways that most effectively assist them in navigating what current events are manifesting.

Carolyn’s Mission: “The Chinese proverb and curse says, ‘May you live in interesting times’.” In the first decade of the twenty-first century, we live in profound uncertainty, faced with issues unprecedented in the history of the human race. Truth To Power seeks to provide readers with a ‘fixed point in a changing universe’ that both informs and supports humanity’s efforts to remake the world—both our personal worlds and our planet. My intention is to offer a beacon of light in the smothering darkness with which we seem to be engulfed, making available information and specific ideas and strategies which we all might utilize as we experience the life/death/rebirth process inherent in the inner and outer realms of our current reality.”

CAROLYN BAKER, Ph.D., not only manages this website but is a professor of history and author of her latest book, Coming Out From Christian Fundamentalism: Affirming Sensuality, Social Justice, and The Sacred. This book and her previous two books, U.S. History Uncensored: What Your High School Textbook Didn't Tell You and The Journey of Forgiveness, may be purchased at this site. She is available for speaking engagements and author events and can be contacted at carolyn@carolynbaker.net